The Asia-Pacific (APAC) finals kicked off with the number one seed, Free Marsy, returning to take their place at the top of the pack. As the 2017 Mythic Dungeon Invitational champions, they looked primed to repeat that outcome at this year’s MDI Global Finals in Ohio on June 22. 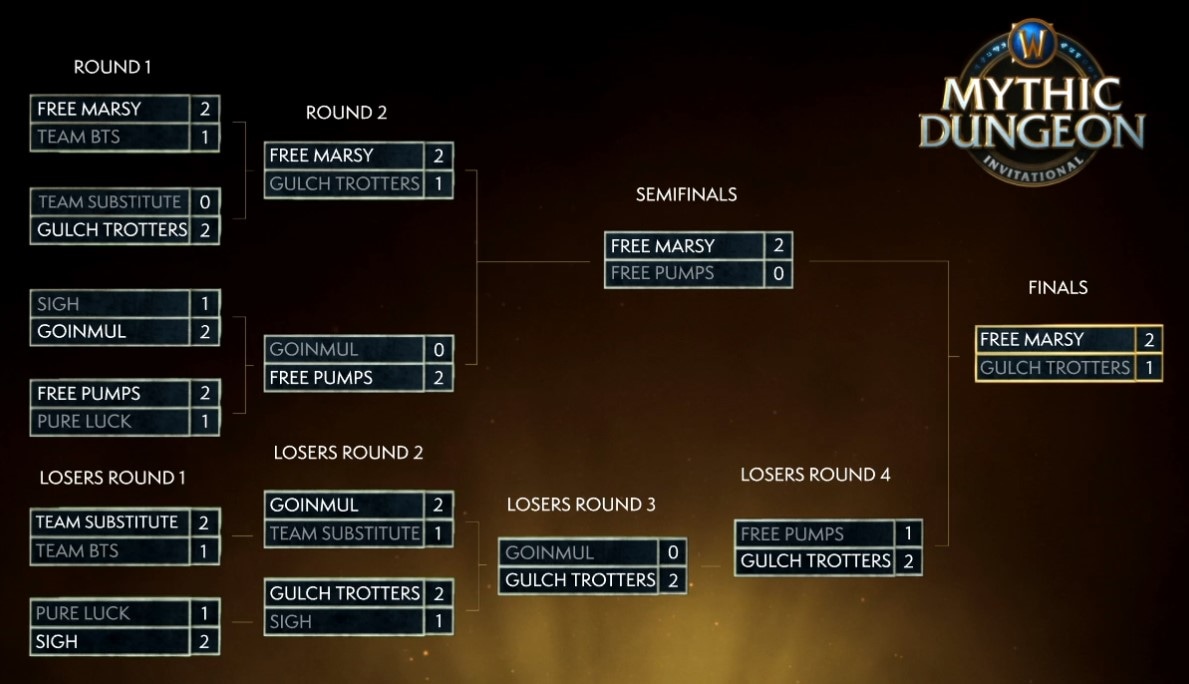 Each squad brought their own distinct team compositions and strategies, and they showed their unique interpretations of the current metagame. In China, we saw a large number of Havoc Demon Hunters and a single Discipline Priest. European teams had a lot of melee-heavy compositions, while play in the Americas leaned more heavily on ranged-focused compositions. And so, it was quite noticeable when APAC had a single Rogue throughout the tournament, and even then, only in a single series from Free Pumps in the lower finals.

Every region put forth a Blood Death Knight tank with the exception of Team BTS, who used a Vengeance Demon Hunter against Free Marsy in the very first series. In that series, Free Marsy’s healer put out considerably more damage than Team BTS’s healer, however, much of that difference was made up by the damage output coming from their tank, which contributed to their victory in the second match in Darkheart Thicket. As the regions come together for the Global Finals, it is likely to see some normalization among group compositions as the teams have several weeks to continue practicing and studying other teams. This allows ample time to hone strategies for the fixed maps and affixes, and to come up with better answers to challenges set forth by their opponents while presenting obstacles of their own.

Druids have proven to be strong members of their teams, be it by bringing in massive damage as Balance or strong healers as Restoration. One thing that is relatively unique to the class is the impressive amount of damage they can put out while also keeping their teammates alive. Holy Paladins put up a good fight on the meters, but are still fairly restricted by the cooldowns at their disposal. With the introduction of legendary equipment in Legion, a whole new door has opened for the daring Restoration Druid who wants to kick it up a notch. A strategy called “Catweaving” trades out Restoration-targeted legendaries for Lady and the Child and Chatoyant Signet and Balance and Feral legendaries, respectively. The shoulder piece allows for increased Moonfire damage as well as making the spell cleave two targets, and the ring increases energy regeneration, allowing for more uptime in Cat form to pump out strong melee damage. The Druid weaves in and out of Cat, Bear, and Caster forms. This strategy was put forth best by Sups, the healer on Free Pumps, adding hundreds of thousands, if not a million damage points to a fight.

Veterans of the Invitational

The APAC region opened up with a large number of returning teams and players. Free Marsy returned with the greatest number of original team members, four out of five. The fifth member, Poom, returned but it was on team Sigh. Gulch Trotters returned with two members—their healer, Dag, and tank-turned-DPS, Tek. The added familiarity from those returning players likely contributed to the success of both Free Marsy and Gulch Trotters leading up to the finals, something they hope will carry over to the Global Finals.