The Mythic Dungeon International (MDI) is a global tournament where the top dungeon-running teams in the world use their skill, intelligence, and creativity to secure the best times possible in some of the most difficult Mythic Dungeons on offer. We are entering the first tournament of the year, the MDI Spring Season, so here’s a breakdown of what you need to know!

Many Turtles Made It To the Water

We opened the Proving Grounds and thousands of players around the world answered the call, completing five different level 14 Mythic Keystone Dungeons to earn their spot on the Tournament Realm. These players will have the chance every second week to compete in the Time Trials for their region, West (North America, Latin America, and Europe) and East (China, Korea, Southeast Asia, Taiwan, Australia and New Zealand). The dungeons and affixes are different for each Time Trial, offering new challenges and fresh chances to make the week’s Top 8, which will be broadcast live in the following languages:

All MDI Cups will broadcast on Saturdays and Sundays local region time. See below for the broadcast dates and start times by region.

Each Cup will give players a chance to get their share of USD $12,000 prize money and MDI points. The top point-earning teams from the East and West will combine in a live, cross-regional, in-person Spring Season LAN final in June. This LAN offers a share of USD $100,000 in prize money, as well as a coveted place at the MDI Global Finals. We’ll share more details about the MDI Spring Season’s finals soon! 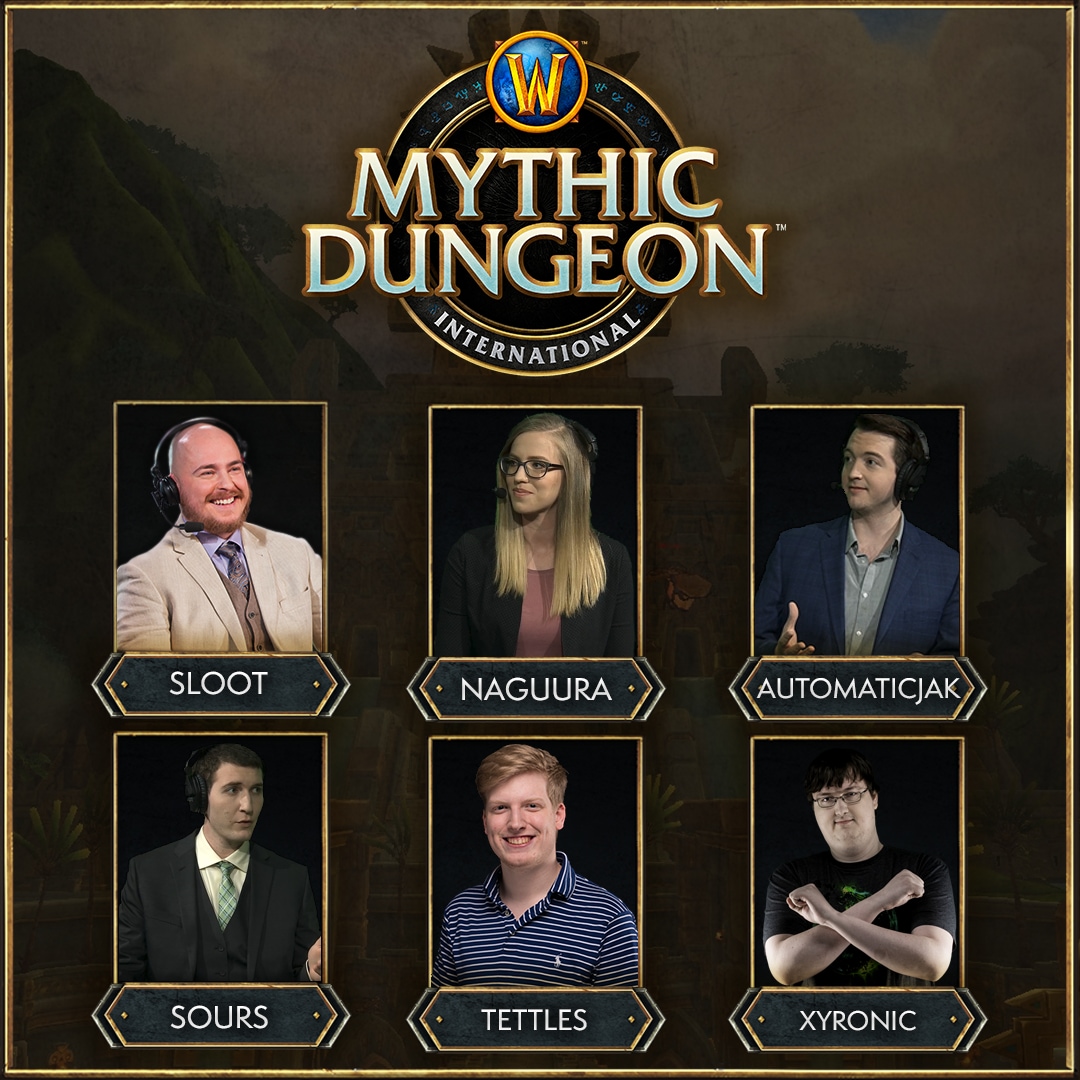 The bald and beautiful Ted “Sloot” Bacinschi has been playing World of Warcraft since the early days. He’s been raiding just as long, if you count stepping foot in Zul’Gurub, getting to the first boss and wiping over and over again. Sloot isn’t just a tank on the desk, he’s also a tank extraordinaire in game as a master of many tank specializations. An iconic figure in the North American and European PvE scenes, you can often find him streaming.

Daniel "AutomaticJak" Azenberger has been raiding in World of Warcraft for many years  and is perhaps most well-known for his healing guides on YouTube and Wowhead, where he specializes in Holy/Discipline Priest and Mistweaver Monk play. He has been creating guides for over five years and enjoys sharing his knowledge and love of healing, so if you’re a healer looking to step up your game, or a tank/DPS looking to understand your healers more, AutomaticJak’s is the voice that will help you do that during MDI.

Aaron "Sours" Shaffer is a former competitor who played Hunter in the second Tespa Great Collegiate Dungeon Race in 2016 and MDI 2017.  He then transitioned into casting, helping to bring North American and Chinese MDI to your screens, as well as taking on a role as an analyst at the first ever MDI LAN.  He hopes to help highlight the skill and talent of the world’s best dungeon runners. His advice to the competitors is to "focus on your own game—it's not about who makes the first mistake in a race, it's about who makes the last".  His goal with the MDI program is for viewers to appreciate the time and effort that competitors put into optimizing their play when they stand at the top of the world.

Former captain of the 4-man MDI team Sinking Ship, and self-proclaimed #2 Balance Druid, Peyton “Tettles” Tettleton’s appearance on the MDI desk will be one for the ages. Overall, his goal for the broadcast is to help viewers understand what makes the runs successful. “There is a lot of nuance in Mythic Plus and being able to teach the path to victory for each team is important,” he said. You can catch him on his stream or on YouTube where he primarily focuses on PVE content. He also authors the Wowhead Balance Druid Guide. He loves a good-natured meme and ridiculous photos of himself photoshopped.

Rounding out the MDI desk team, Alex "Xyronic" Tatge is an Affliction Warlock extraordinaire. You can find his guides on Wowhead, where he breaks down everything a master of shadow magic would need to know, from talent builds, Azerite gear, spell rotations, macros and addons, Mythic+ guides, and more!

After existing for years as an invitational tournament, the Mythic Dungeon International is not just an expanded, worldwide, merit-based tournament—it’s a thank you to all the fans of dungeon running around the globe. We can’t wait to get started. To stay on top of Time Trial results each week and the MDI Cups, check out Raider.IO, and be sure to follow us on Twitter and Twitch. We’ll see you in chat!