We’re back, dungeon-runners! The Mythic Dungeon International (MDI) is coming to YouTube beginning April 11. There have been some major changes this year, but the MDI is still pushing the craziest keys and facing the most fearsome affixes. Here’s everything you need to know.

We’ve made a few changes to the format this year, the Europe and Asia (EU/Asia) division includes players from Europe, the Middle East, Africa, Korea, China, and Taiwan.

The Americas division includes players from The Americas, Australia, and New Zealand.

Teams will participate in the division based on where the majority of their team’s players reside.

All MDI Cups will broadcast on Saturdays and Sundays local region time on the Warcraft YouTube channel. See below for the broadcast dates and start times by region.

We’ve added a new dungeon to the rotation this year with Operation: Mechagon. This dungeon provides 8 challenging bosses split in two separate wings—Junkyard and Workshop.

With the Visions of N'Zoth content update comes a new season of competitive play and a new Affix to contend with—Awakened.

While the Awakened affix is active, players will discover obelisks throughout the dungeon, which will pull players through the veil to the shadowy world of Ny’alotha. There, players will confront a powerful servant of N’Zoth which they must defeat, or the servant will join forces with the final boss in the instance. 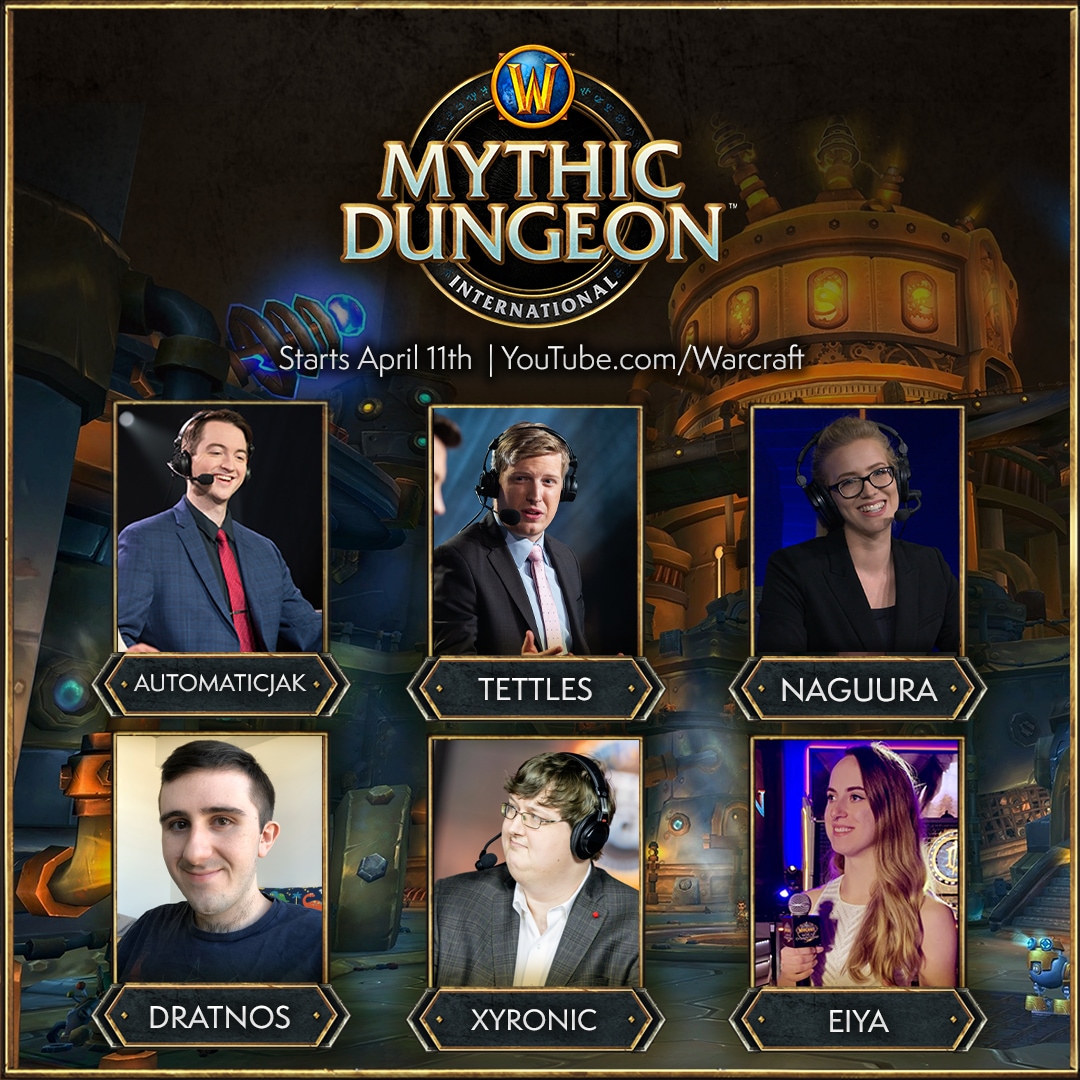 Hailing from Italy, Caroline “Naguura” Forer has come a long way from waiting for her brothers to get off the computer so she could log in and play her Paladin. “When I couldn't play, I would just sit for hours and watch my brothers play, then jump straight on as soon as they left the chair,” she said. From Paladin to Druid and from healing to damage, Caroline grew up with the game and went on to establish herself at the core of the EU PvE scene. Now with years of experience, a multitude of World Firsts under her belt, and her own forays into WoW esports (both competing and casting), she returns to the MDI casting team.

Former captain of the 4-man MDI team Sinking Ship, and self-proclaimed #2 Balance Druid, Peyton “Tettles” Tettleton’s appearance on the MDI desk will be one for the ages. Overall, his goal for the broadcast is to help viewers understand what makes the runs successful. “There is a lot of nuance in Mythic Keystone dungeons, and being able to teach the path to victory for each team is important,” he said. You can catch him on his stream or on YouTube, where he primarily focuses on PVE content. He also authors the Wowhead Balance Druid Guide. He loves a good-natured meme and ridiculous photoshopped photos of himself.

Dan "AutomaticJak" Anzenberger has been a part of the MDI crew since the beginning, and he’s been topping off health pools in World of Warcraft for many years. He is most well-known for his healing guides for the past three expansions on YouTube and Wowhead, where he plays all healers but specializes in Holy/Discipline Priest and Mistweaver Monk. He enjoys sharing his love of healing, so if you’re a healer looking to step up your game, or a tank/DPS looking to better understand your healers, Jak will be here to cover it all.

Alex "Xyronic" Tatge is a Warlock extraordinaire, winning the first U.S. World First in the past eight years. You can find his guides on Wowhead, where he breaks down everything a master of shadow magic would need to know, including talent builds, Azerite gear, spell rotations, macros and addons, Mythic+ guides, and more.

Tristan "Dratnos" Killeen is a jack of all trades in World of Warcraft PvE. Raiding at a high level himself, he's also done coverage for the Race to World First. In Mythic Keystone dungeons, he creates routes for each dungeon every week, and nearly made it to an MDI cup. Dratnos has a thorough understanding of all the different things that can go wrong in a dungeon and is ready to share that wisdom with you.

Gillian “Eiya” Long started working in esports in 2016. She has worked as a stats producer, observer, and tournament admin, and her passion for WoW esports is evident behind the camera and in-front. A WoW fan since Burning Crusade, Eiya debuted as sideline reporter and host last year. Most recently, she hosted the Complexity Limit Race to World First and the Keystone Masters Tournament.

For the health and safety of our casters and staff, the MDI will be moving to broadcast remotely. Fortunately, our broadcast schedule will continue as planned while our production and casters will be working from home.

Stay connected and stay on top of the latest news by following us on YouTube and Twitter. Check out Raider.IO, and check out the broadcast schedule on our esports page.

Make sure to tune in this weekend!