It appears the strange festivities of the past week have subsided and I’m now left with a pile of out-of-shape, brew-filled slackers who have neglected their training. Not acceptable!

You can toss your curses and excuses into the nether for all I care—I don’t accept crying as a form of explanation! And given that you’ve lost a week’s worth of training, I’m going to have to step it up to make sure you’re back to tip-top shape before it’s too late! I don’t like pudgy tamers!

So in light of your fall into blubbery, you are hereby ordered to head to the Isle of Quel’Danas, where you will slip into your bloomers, dip into the North Sea, and swim down towards Eversong Woods along the western coast, across to Kezan (don’t get sucked into the Maelstrom!), over to Darkshore, and around into Tanaris. Once there, you need to head into the Caverns of Time, where you will face off against the remnants of the Infinite Dragonflight: Infinite Whelplings! 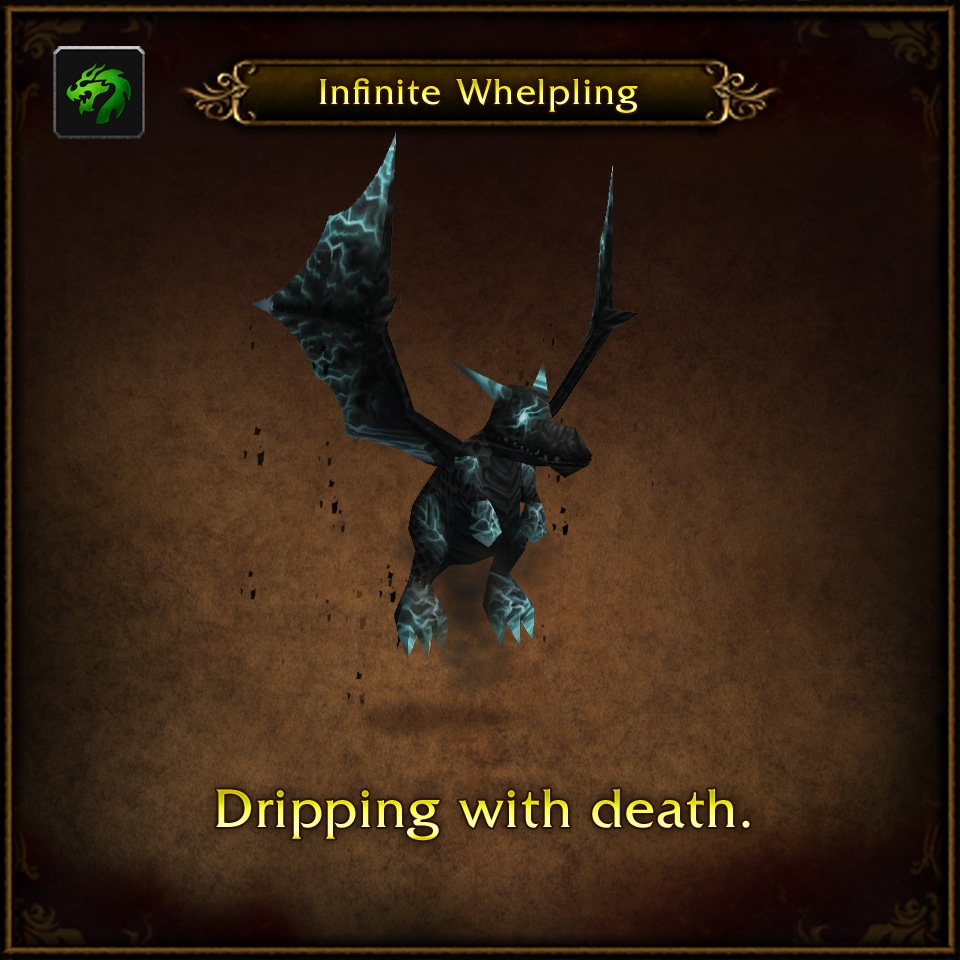 Crithto: Emanating the very essence of corrupted time and death, the Infinite Whelpling is a much tamer version of its bigger Infinite Dragonflight brethren. But in Pet Battles, you might want to learn to manipulate time to bring on your own Hour of Twilight, because that’s when this dragonkin truly shines! Swoop in for victory by combining a few Sleeping Gas strikes with Darkflame, or stay alive in your seemingly darkest hour by using Tail Sweep and Early Advantage followed by Healing Flame. These time-twisted things aren’t known for eating rodents or small mammals, so be sure you keep your face at arm’s length when handling one!

Nozdormu once said, “What matters is that Azeroth did not fall; that humanity survived to live another day.” He clearly hasn’t met you lot. But that’s OK! When I’m done with you, you’ll be so whipped back into shape that even the old gods might toss you a salute! So drop the Pork Belly Pie, put down the Ogre Mead, and start paddlin’ for Kalimdor! LAZY BACKSTROKE NOT ALLOWED!!!

Come join the discussion about this pet in our Pet Battles forum. You can also learn more about the Infinite Whelpling by visiting WarcraftPets.com.