Once again, your incessant need to gorge yourself during Pilgrim’s Bounty has left me with little choice. Oh sure, you stuffed your faces with turkey, all the fixin’s, and delicious pie, but you left the rest of us on Azeroth in quite a dangerous situation. Unadulterated danger!!

For you see, your insensitive actions are about to create mayhem on our dear planet the likes of which no one has ever seen. According to my pal Historian Llore, it could be nastier than the War of the Ancients, deadlier than the War of the Shifting Sands—no, you’ve succeeded in taking all of us to the brink of total annihilation! None shall live!

That is unless you do something about the havoc you’ve created . . . and I mean now! For upon the ground as far as the eye can see lie the carcasses of every friggin’ turkey known to have existed. You’ve hacked, slashed, and stomped your way to destroying our ecosystem, but more importantly, you’ve invited an onslaught of carnage I fear none of us will survive! Gathering in Western Plaguelands right this very moment are hundreds of Blighthawks that are filled with a bloodlust exacerbated by being undead. Not only will they converge upon our lands and begin to pick at the rotting flesh of every dead creature they find, they will also turn on us. Your fancy armor means nothing, either, because you don’t wear armor over your eyes! 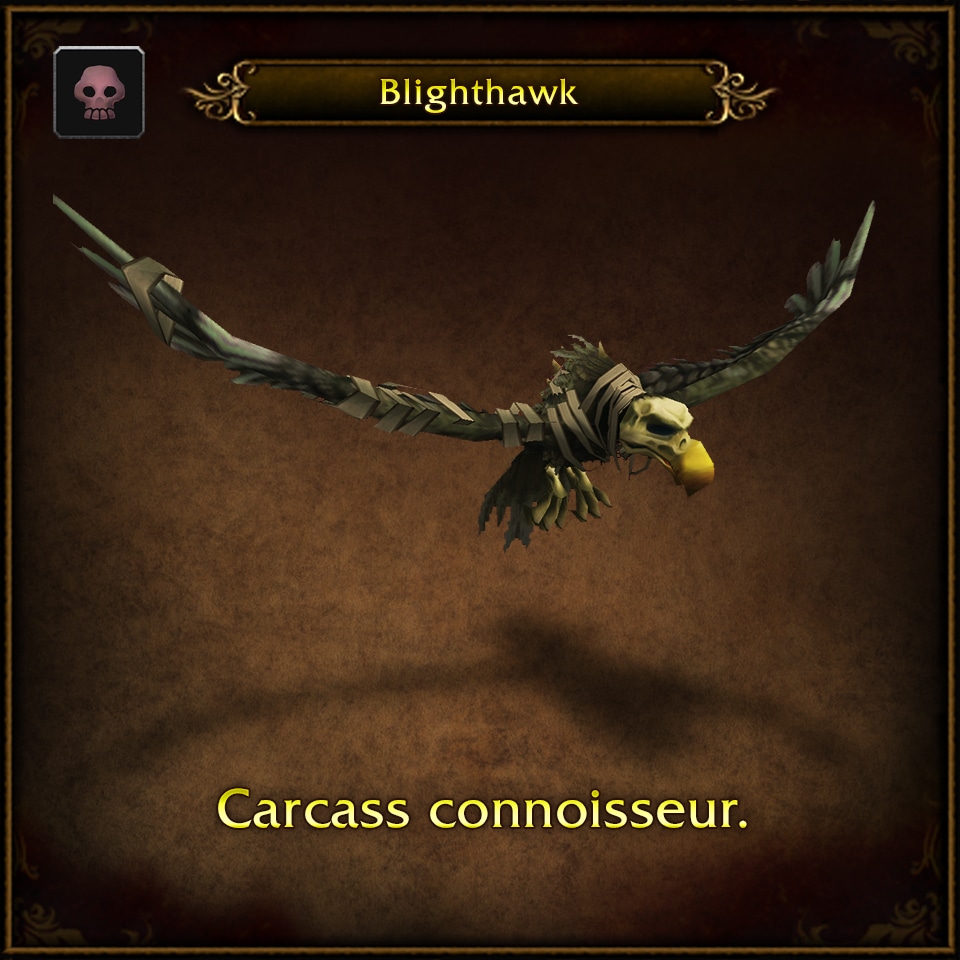 Crithto: Before this kettle of death can make its move, Payne needs for you to head to Western Plaguelands and gather up as many Blighthawks as you can find. They won’t go quietly, but once you’ve captured and tamed the flying dead, cunning abilities like Slicing Wind and Ghostly Bite should give you an edge in battle. They’re quite versatile, too, and can prolong their dominance by taking advantage of Consume Corpse and Lift-Off. Just please, whatever you do, avoid approaching these monstrosities if you’re like me and have bacon stuck to your face.

I’m gettin’ real sick and tired of having to discipline you people rather than see you excel in your training. But I admit that in my days as a young recruit, I too stepped out of line and onto a few turkeys here and there. Granted, I didn’t jeopardize the existence of every single living being! Go kill or capture every single Blighthawk you can find and clean up this mess. Just do what needs to be done so I can come back and yell at you again next week! BECAUSE I LIKE YELLING AT YOU!!

Come join the discussion about this pet in our Pet Battles forum. You can also learn more about the Blighthawk by visiting WarcraftPets.com.