Life rarely offers much in the way of surprise for me. Given the medals I’ve earned, armies I’ve destroyed, and the huge pile of pets I’ve got stashed behind a lookout tower in Icecrown, not much happens that makes my heart jump—that is, until a couple weeks ago. Hooray, my ticker works!

A squad of elite Argent Tournament trainees was on the field learning how to joust—though “elite” might not be the right word considering I was able to beat all of them just using my arm. Suddenly, one of them clutched his chest and wailed out in pain. As he fell to the ground with his lance by his side, I could see he was in need of medical assistance. After my giggling stopped, I jumped off my mount and kneeled next to him to see what I could do. That’s when it happened. What the hell is that?!

A hole in his stomach tore open, and I could see what appeared to be a mechanical tail sticking out. It wagged back and forth as I stared at the trainees who were now standing around us in a circle. All of them looked like deer in brazier light. I reached in to find out what it was when I felt something bite my finger. This, of course, didn’t faze me much, but it did cause me to clamp down and yank it out. It was a Rabid Nut Varmint 5000! That doesn’t belong there!

Our own squirrel-chaser extraordinaire has more. 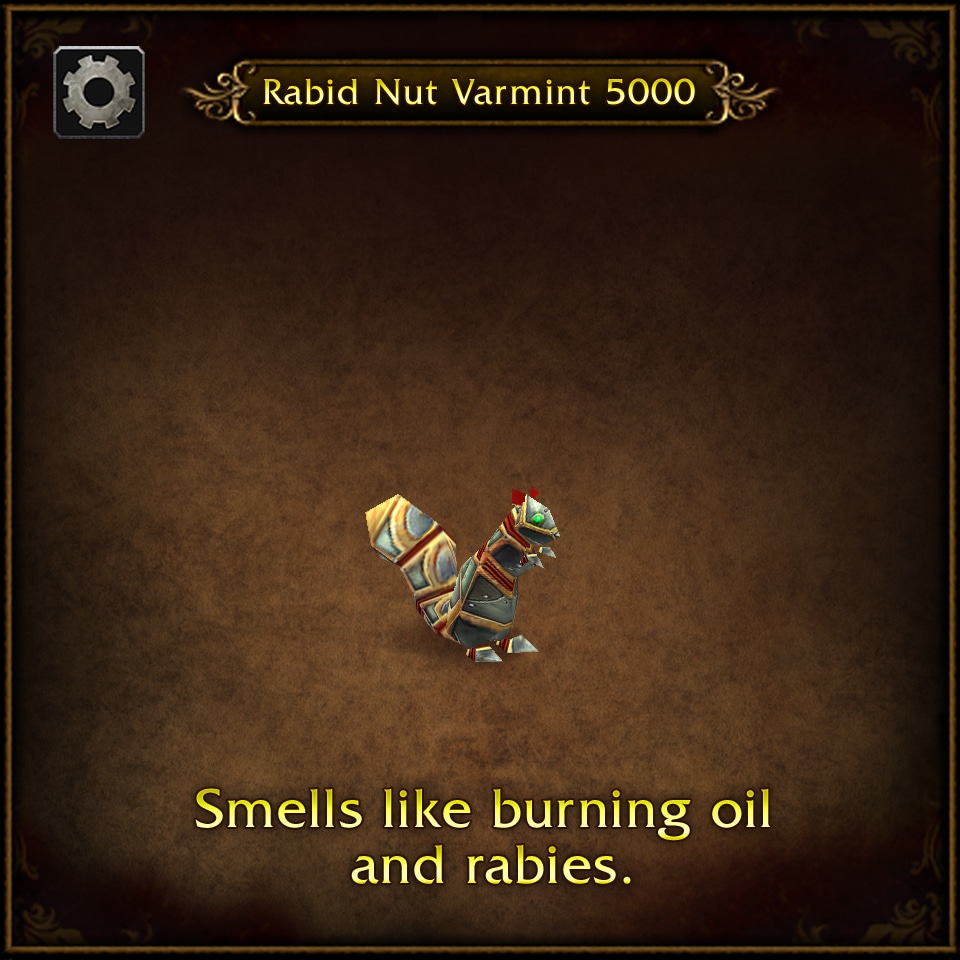 Crithto: Forget the disease-infested rats that plague the streets of Stormwind—the Rabid Nut Varmint 5000 is the real rodent menace to society. Its origins are unknown, but I suspect the gnomes may have had something to do with the creation of these critters—perhaps a science project gone awry. In any case, if you happen to catch one of these armored beasts in the wild, they’re perfectly capable of creating a cavity in your opponent’s stomach with the abilities Overtune and Thrash. They’re also viciously protective and aggressive, as anyone who’s tried to deal with their Extra Plating and Rabid Strike can attest. Whatever you do, though, make sure not to carry any nuts or bolts in your pocket when you approach one. That’s their favorite snack!

The horror in the eyes of that trainee will haunt me for another, oh, 10 or 15 minutes, and that’s why your assignment this week is to rid the planet of these metallic sciuromorpha. Yes, yes, make sure you capture one for your team because . . . holy squirrel turds, was that whole event awesome! Seriously, if you could do that to an opponent, that would be sweet!

But more seriously, I hate these things.

CLOSE YOUR LEGUME HOLES AND MOVE OUT!

Come join the discussion about this pet in our Pet Battles forum. You can also learn more about the Rabid Nut Varmint 5000 by visiting WarcraftPets.com.