Congratulations, maggots—err, tamers! You’ve survived a year of basic training, amassed a veritable army of pets, and now it’s time to move you into the advanced course and apply your tactical training against other tamers out in the wide, wide world. If you thought some of my challenges were easy before, you ain’t seen nothin’ yet! Nothin’, I say!!

Your target this week is Zunta, an aspiring pet tamer who neglected to train under my watch . . . so now you’re going to teach him the lesson he deserves. He’s a troll who hangs out in Durotar just south of Orgrimmar, and he’s got two measly little pets that resemble the goo still stuck to the bottom of my boots. Crruunnncchh!!

Wait, I don’t need to waste my own breath on this stuff—I’ve got underlings to do that. Let’s bring in Mr. Crithto to give you the details of your assignment. 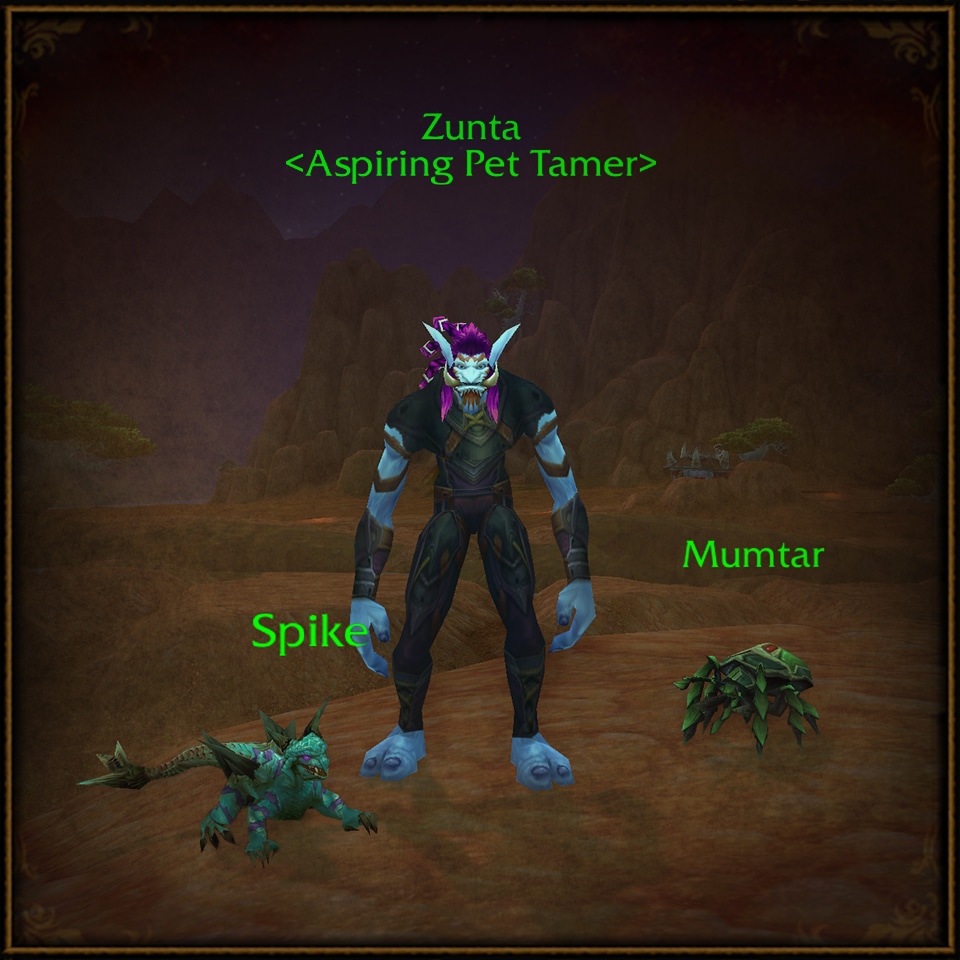 Crithto: You’ve done enough laps around Pandaria and hikes over snow-covered mountains, so how you get to Zunta doesn’t matter. He only has two pets, so your assignment this week is to face off against him using no more than two pets of your own. Also, his pets are level 2, so you must pick two pets that are no higher than level 1. And to make this even more interesting, you can only use Flying, Mechanical, or Beast pets on your team. Your job is to defeat Zunta with both pets still alive, scoff at his lack of Payne-ingrained strategy, and then report back here. Each K.O.-ed pet on your team will mean 100 pushups, so don’t screw up!

You might be thinking this is a fairly easy exercise. For me it is, but for you it’s your first step toward becoming a Master Tamer like me. Which you’re not! And don’t even think for one second you can cheese Crithto’s orders, because they also happen to be my orders. And it’s just a small taste of what’s to come in Major Payne’s Advanced Pet Battles Training.

WELCOME TO THE DARK SIDE OF MY WORLD, KIDDOS! IT’S GONNA BE A BUMPY RIDE!

Come join the discussion about this encounter in our Pet Battles forum. You can also learn more about Zunta by visiting Wowhead.com, and details about Pet Battles by visiting WarcraftPets.com.