Our perilous journey through Draenor now takes us into the treacherous jungles and unforgiving canyons of Gorgrond, where opposing primeval forces are locked in an eternal battle. We sat down with Senior Game Designer Steve Burke, Associate Game Designer Zachariah Owens, and Game Designer Ryan Shwayder to find out more of what this savage land has in store.

Located in northern Draenor, Gorgrond is where heroes either rise up and persevere or fall and become carrion for rylaks. After your initial confrontation with the Iron Horde (in Shadowmoon Valley for the Alliance or Frostfire Ridge for the Horde), this brutal, beautiful land divided by ancient hostilities is your next destination.

Zone Music Piece: The Foundry by Eimear Noone

At this point in our journey, players have survived the rigors of Tanaan Jungle and journeyed through either the majestic forests of Shadowmoon Valley or the icy expanse of Frostfire Ridge. What brings them to Gorgrond, and what’s the story waiting for them to discover there?

Steve Burke: After withstanding the Iron Horde’s initial assault, you’ll make your way into Gorgrond with a handful of allies to try to discover the Blackrock orcs’ intentions and find a way to thwart any plans the Iron Horde may have. It’s a perilous recon mission. Gorgrond is a land of giants embroiled in an epic struggle between creation and destruction. It’s the kind of place you avoid unless you have a death wish.

Gorgrond is a land of giants embroiled in an epic struggle between creation and destruction.

If you’re an Alliance player, you’ll enter the zone from the eastern coast, where you’ll get your first taste of things to come. You’ll immediately encounter an elite group of draenei known as the Rangari holed up in a hidden encampment, fighting for their lives against vicious plant-like creatures. When the dust settles, your group will join the Rangari survivors and make a retreat to a clearing deeper in the zone.

Horde players will enter the zone from the west, where you’ll encounter the Laughing Skull clan. These maniacal orcs are volatile and bloodthirsty, capable of extreme brutality—and as you experience Gorgrond for yourself, you’ll begin to understand why. The Laughing Skull orcs are struggling to maintain their ancestral territory, but the brutality of being constantly assaulted by the warring factions of the zone has forged them into bloodthirsty savages.

How would you describe the zone’s ambience? What’s it like?
Steve Burke: Gorgrond consists of two distinct regions, each reflecting the nature of its inhabitants. The eastern portion of the zone is filled with lush plant life and shimmering pools. It seems idyllic until you realize looks aren’t everything. The northwest region couldn’t be more different. It’s a dry, barren wasteland, but with a beauty of its own. Fantastic rock formations mixed with geysers and sulphur pools create an unconventionally vibrant environment. 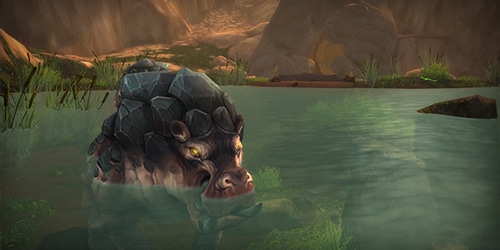 Zachariah Owens: The forested region definitely isn’t what it seems. The creatures here are merciless in seeking out anyone who enters their territory. They will capture them, kill them, and then infest their corpses with plant life or mulch them into fertilizer. Basically, everything in this zone wants to kill or eat you—in that order, if you’re lucky.

Basically, everything in this zone wants to kill and/or eat you —in that order, if you’re lucky.

Which locations would you say are some of your favorites?
Steve Burke: Personally, I love the steam pools and geysers. They remind me of my visits to Yellowstone as a kid. I really like the level design of the whole zone. It does a great job at setting the scene for the events that take place.

Zachariah Owens: For me, it’s Evermorn Springs. The rainbow, the pristine lake, and the botani homes are a beautiful contrast to the decaying bones and corpses the grove rests upon. The majestic botani move here and there tending to the grove while their infested denizens patrol like mindless guards ready to attack anyone who would threaten the bloom. 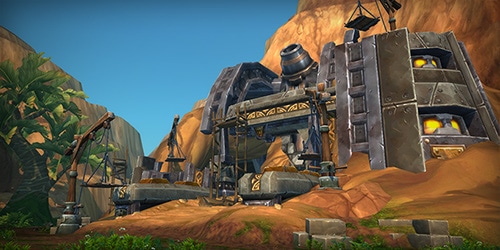 Ryan Shwayder: Most of the zone has a really expansive feel to it, but two places in particular always grab my attention. The first is Gronn Canyon. It is filled with dangerous monsters and is a barren wasteland, but it’s also somehow incredibly beautiful. And the name is a pun, which automatically makes me like a place more. The second is Tangleheart, a lush jungle where botani are working to raise new ancients for their armies. The ancients here have fiercely embraced their susceptibility to fire . . . but you'll have to delve into the jungle to see how.

What outposts will players be able to build in Gorgrond, and how do they impact the Garrison?
Steve Burke: The outposts you build shortly after arriving in Gorgrond will provide a preview of a building you might want to include in your own Garrison. In this zone, you’ll make a meaningful choice between building a Lumber Mill and a Sparring Arena.

The Lumber Mill will grant access to the shredder, a vehicle you can summon throughout the zone. The shredder will grant powerful abilities and allow you to cut your way to otherwise inaccessible treasures and areas.

The Sparring Arena will provide a gladiator who will fight alongside you and bestow a buff that will increase in power based on your prowess. If you do the entire quest line, you will free up to five gladiators, each with their own distinct buffs.

Your choice of outpost will also determine which region of the zone you’re directed to quest through and have an impact on how you’ll assault the Iron Horde. 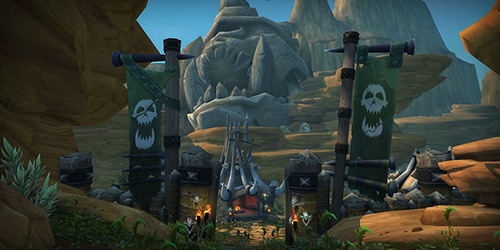 There’s lots left to discover on our journey through Draenor—be sure to check back for more zone previews soon.