In World of Warcraft Patch 6.2, we're introducing a new series of seven different weekend Bonus Events, two of which will feature Timewalking Dungeons—one in Outland dungeons for characters level 71 and higher, and another in Northrend dungeons for level 81 and higher. When you Timewalk these dungeons, your character’s power and gear will be scaled down to a fraction of what they normally are, and as you may have never ventured into some (or any) of these dangerous places, it might be a good idea to prepare yourself now.

The original exiles on Draenor found death to be an unsettling and unfortunate consequence of life, and so the draenei hid their dead away in the subterranean grave-city of Auchindoun, a labyrinthine marvel located beneath the forests of Terokkar.

It is said that long ago, a shadowy cult invaded Auchindoun. In its depths, the cult released an immensely powerful, malevolent being from arcane captivity, blasting the decrepit city apart. Any adventurers brave enough to enter the abandoned, bone-littered remains of Auchindoun would do well to remember the warning of the city's original guardians, the Auchenai: those who do not respect the dead...

... may become entombed along with them. 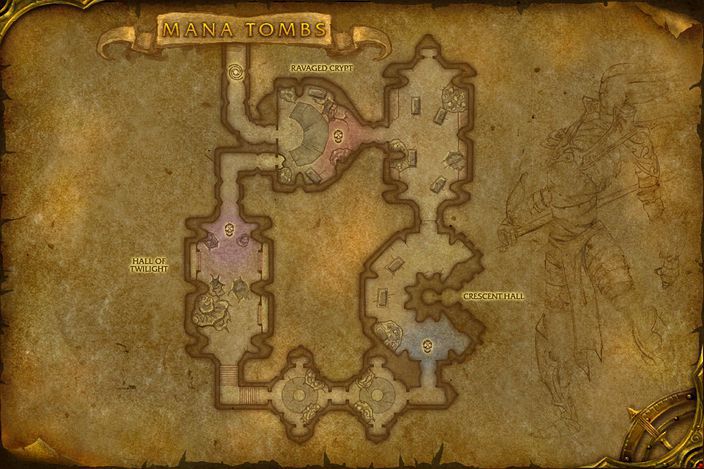 This infamous Void Lord is also known as the Duke of Chaos, the Eater of Nations, and Worldslayer. Pandemonius was one of the commanders serving under Dimensius when the ethereal homeworld of K'aresh was destroyed. He was later bound by Nexus-Prince Shaffar and forced to continue sating his unending hunger in service to the ethereals.

Under the command of Kael'thas Sunstrider, Pathaleon the Calculator summoned a powerful colossus to gather the arcane energies flowing from beneath the Mana Tombs. Tavarok has unexpectedly been transformed by the unique emanations, losing the red-tinged corruption of Pathaleon's influence. The white colossus has gained his own free will and uses it to greedily consume all who would stand in his way.

Convinced that vast riches lay within the depths of the Mana Tombs, Nexus-Prince Shaffar has spent untold amounts of his own considerable fortune to move an army into the shadowed halls of this crumbling ruin, and to keep competing ethereals out. The prince's greed knows no bounds, and he has vowed to uncover the mysteries of the Mana Tombs or die trying.

If you haven’t earned these achievements already, completing this dungeon will award Mana-Tombs and Heroic: Mana-Tombs, the latter of which is required for Outland Dungeon Hero.

Killing enemies in this dungeon increases your standing with the Consortium. For a full breakdown of what you can do with Consortium reputation, check out Wowhead and Wowpedia.

Timewalking dungeons are coming to WoW with the upcoming Patch 6.2. Keep an eye out for the weekend-only quest A Burning Path Through Time, which rewards a Seal of Inevitable Fate when you complete five Burning Crusade Timewalking dungeons.