In this zone preview, we sat down with Game Designers Zachariah Owens and Ryan Shwayder and Senior Level Designer Matt Sanders to learn more about Highmountain and what you’ll experience there.

The location of one of the largest mountains in Azeroth, Highmountain is a rugged and beautiful place. Here, three tribes of Highmountain tauren are locked in a bitter struggle against the savage drogbar that threaten their lands. 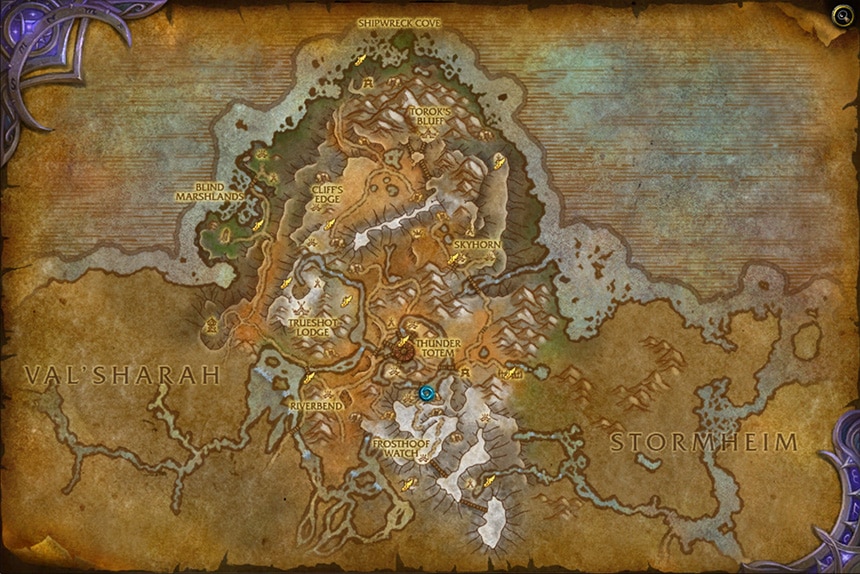 Matt: The inspiration for Highmountain is a mix of Yosemite, the Swiss Alps, and Everest. We wanted to give players the sense that is the highest mountain, the tallest peak, in the game. We wanted to make parts of it seem almost uninhabitable, with glacial terrain and the kind of treacherous conditions you’d expect to find at such incredible heights.

Because it’s the highest peak in World of Warcraft, so far at least, we wanted to give players a sense of progression within the harsh environment that the tauren and the drogbar have been living in. We wanted to acknowledge altitude, proximity to the ocean, exposure to the sun and shade, and what season it is. Currently it’s spring, so the climate is mild to temperate. Crops are growing, and plenty of food and other resources are readily available. But imagine how cold it would be in the winter. It would be brutal, and most visitors probably wouldn’t survive through the season. So there is always a huge effort to stock up on supplies and protect them from would-be invaders.

Ryan: If you’re familiar with the War of the Ancients, you might recognize the namesake of the zone—Huln Highmountain, a renowned tauren who helped defeat Tichondrius many years ago. After receiving the Blessing of Cenarius, the tauren here have changed—they have moose horns instead of normal tauren horns, among other things—and we think players will enjoy getting to see a unique take on one of the game’s most familiar races.

Matt: Long, long ago, Highmountain used to be the home of the Black Dragonflight. We didn’t want to dig too deep into that for Legion, but there is definitely some interesting history in Highmountain that we can continue to expand on.

Because the waters of Highmountain flow into Suramar, Stormheim, and Val’sharah, the area also serves as the lifeblood of virtually every region on the continent. There’s a lot riding on the taurens’ ability to maintain balance in the zone. As part of that, the Rivermane tauren established a fragile peace pact between the Highmountain tauren and the drogbar as a means to survive in relative peace. As part of this agreement, they mutually benefit from one another’s resources through trade at designated areas outside drogbar caves.

Drogbar dwell in the infinite caverns deep within Highmountain, serving as overlords of the zone’s “underworld,” if you will. They provide spell components from inedible plants, rare minerals, gems, and other rarities as a trade offering to the tauren. In return, the tauren bring the drogbar grain, fish, leather goods, and lumber. They make a mutual exchange at these ritual sites, then go back to their respective homelands. It’s a symbiotic relationship—they don’t like each other, but they needed each other. We tried to subtly establish that throughout the zone.

Then there are the harpies and kobolds. The tauren used to keep the harpies at bay with the Hammer of Khaz’goroth—until it was stolen by the drogbar. Now, the harpies have been emboldened. The kobolds offer stolen and scavenged trinkets, oftentimes items that would be broken and worthless to anyone else, and the harpies provide protection for their offerings of obedience. The kobold are very prolific and have now become a noticeable nuisance. It is said, “For every kobold you see, there are a hundred more.”

Ryan: The Hammer of Khaz’goroth has always been the tie that binds in Highmountain [Editor’s note: read the comic “A Mountain Divided” to learn more], and as soon as that was taken by the drogbar, each tauren tribe suddenly had their own priorities to deal with. The Skyhorn have to deal with the harpies, while the Bloodtotem warriors—who’ve always been the jerks of the bunch—no longer want anything to do with the rest of the tribes. Meanwhile, the fishermen and farmers of Rivermane have to deal most directly with the drogbar, which isn’t really in their nature.

Matt: Yeah, the Rivermane have always been the diplomatic, reassuring caretakers. The Rivermane just care about the agriculture and their shamanistic ways. They’re very peaceful, and you’d never see them getting into boxing matches or big fights like the Bloodtotem.

The Skyhorn are essentially the wise masters of the skies. They can get to places no other tauren can because of their relationship with the eagles in the area, and help players navigate all the way to the peak.

Because of that, the Skyhorn are also the tribe that’s sort of “running the show.” But that’s caused some tension with the Bloodtotem—the first chieftain of all the Highmountain tribes was a Bloodtotem, and they’ve long felt that they’d make the best leaders because they’re the strongest. That’s made them more reclusive, and unwelcoming to outsiders. They also have a predatory side—you’ll walk into their area and they’ll be watching you, but you’ll never know it.

Zachariah: That’s where you get all of your Feral and Guardian Druids—the savage bear forms. They were the warriors of the tribes, the enforcers.

Matt: They’re kind of a mix between the personalities of the trolls and orcs. The trolls have a very rich and mysterious culture, but it’s one that outsiders can never truly know. The orcs are very savage.

If you are not as strong as a Bloodtotem, they’ll probably kill you because they can’t stand you. And if you are stronger than they are, they’ll try to kill you because they want to prove themselves. So the challenge comes in finding a way to make them think you’re useful. For example, the Rivermane provide them with food, since there’s no longer enough to hunt because they killed everything off. But you still know the Bloodtotem are looking down at them thinking, “pathetic little Rivermane.”

Q. Which locations would you say are some of your favorites, and why?

Zachariah: Highmountain Peak. Just the hike up to the peak is such an amazing experience. You can just see the diversity of the ecosystems there. And there are just some places that are so harsh, places where nothing really lives, that make you feel like an explorer.

Matt: You feel like you’ve climbed Everest. You’re able to look down upon Suramar, which is beneath two completely separate layers of clouds—sort of like what you see when you’re climbing or descending in a plane. That helps further establish the feeling that this is a place where no one—certainly no outsiders—could naturally survive. So when you see those huge, isolated outposts up there in the freezing cold, you know how challenging that outpost must be to maintain.

One of my favorite aspects of Highmountain is its cavernous nature—it’s not just a solid piece of rock. It’s riddled with networks of tunnels, with steam and warmth radiating from its caves, implying potential volcanic activity without showing lava.

If you go through Neltharion’s Vault and start navigating the passageways between the mountains along the main road, you realize how deep things go, giving you a sense that you could keep going down and down and down until you reach the coast—or just get completely lost. But my favorite specific place is a cave where you emerge from a tunnel and see all these drogbar bridges that keep going into the depths. If you look down, you think, “Wow, there’s a whole world within this mountain that is left up to the imagination.”

Ryan: My favorite place is the beaver dam in Pinerock Basin where the rapids give way to calmer waters. The river cascades its way down toward the farms, Thunder Totem is behind you, and you're surrounded by beauty in all directions.

Zachariah: The zone is full of little surprises here and there. We try to reward exploration in all our zones. If something looks like it’s a trail that might lead off somewhere interesting, chances are it does. You will keep finding new places, treasures, and events as you explore.

Matt: Tauren are awesome. So are kobolds. Other than that, I’m torn. In one way, it’s fun to do Highmountain last, and eventually be able to look down upon other zones you have explored. On the other hand, you could always take the Demon Hunter gliding into Suramar or fly into Stormheim, and have a cool sense of scale based on where you just came from. From the height of the mountain, the possibilities seem endless—“OK, I’ve conquered the mountain, now what am I going to do?”

Either way, we wanted the ground path between Highmountain and Val’sharah to be awesome. Same with going to and from Stormheim. We wanted players to feel just as rewarded by just traversing the land the “classic” way, walking or running on their mount. There are a lot of World of Warcraft players out there who love to explore this way, and we tried to provide them with plenty of those opportunities.

Q. What is it that will bring them back to this zone?

Matt: Unlike some of the other mountains in World of Warcraft, if you go mountain climbing here, you’ll find that it’s filled with playable space and tons of stuff to discover. You’ll stumble upon a vignette here or some kind of a camp there, or a story—we really wanted to reward exploration.

Ryan: Sometimes it’s just finding somewhere that you’re going to decide is your favorite place—maybe just an awesome view. There might not be anything there, but it could be like, “This is where we’re going to hang out. Me and my wife really want to chill here all the time.”

Q. Is there anything else players should know about this zone?

Zachariah: I would say this is the “explorer’s” zone. This is the zone you go to when you just want to happen upon things, go on a spontaneous journey up a path, or wander down to the coast. Every nook and cranny has something.

Ryan: There’s a lot of cultural exploration, too. The tauren here are familiar, but different. The drogbar are completely new.

Matt: And everything is interrelated. The harpies are in some way related to the Skyhorn. The drogbar have a relationship with the Rivermane.

Ryan: “Mglrmglmglmgl!” Translation: “The murloc gods have blessed us.”

Zachariah: Just another note for when you’re in Thunder Totem: leave the music and sound on, especially when playing through the first time. There are a lot of sound treats in general, and a lot of great voiceover in the right places to get the stories across.

Matt: There are so many subtle details, and we really wanted to show a visual progression based on an awareness of the geography. We have different types of erosion because of the harsh climate. We considered details based on whether an area is shaded, whether snow would be melted in a particular location, or whether you’d encounter more plant life in an area. There are some cool and rewarding reveals, like a cave where you’ll come upon a spot with a marine layer and full sun. Little spots where plants grow and proliferate.

Ryan: Highmountain is really about exploration and discovery. We never direct you to most of the stuff that’s in the zone—but if you keep your eyes open, there’s plenty to see.