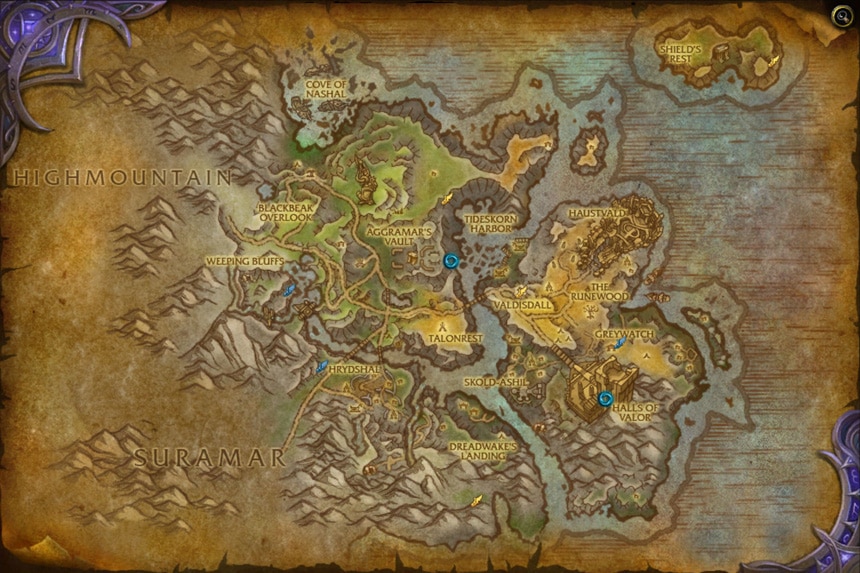 The land of Stormheim is one of harsh beauty, a reflection of the vrykul who dwell here. As you explore, you’ll learn more about vrykrul culture, including the origins of the mysterious Val’kyr and the terrifying Kvaldir. Along the way, you will contend with the vrykul God-King as he races to claim the Stormheim’s Pillar of Creation on behalf of his Legion masters. Ultimately, your quest will take you into the very heavens where the greatest champions of the vrykul await to test your worth.

Q. How would you describe the zone's ambience? What's it like?

Ely: We set out to capture a verdant, mid-height mountain landscape with heavy basalt rock formations enshrouded in the kind of mists that you would see on the underside of a heavy cloud bank. It feels very wet—these guys are living in a damp environment with there’s always a sense that a storm is hanging overhead.

The zone starts with a heavy, oppressive atmosphere, and gradually moves into more of a bright, golden, fall-like environment to lift the mood. Then it moves back into a heavier, repressive mood again.

We really tried to use the environmental changes to go hand-in-hand with the story for this zone. It also starts heavy and then really moves into a little bit lighter story, then back to heavy.

Don: I would describe the ambience of the zone as dramatic. There are really big, dramatic cliffs. The Halls of Valor loom over the whole zone, and you can almost see it from everywhere. The mountain is right there, and there’s a crazy storm swirling over it. It’s filled with really dramatic vistas and cliffs.

Don: It’s imposing. And you feel really small when you’re in Stormheim.

Ely: It’s different from Highmountain in that Stormheim has more of a weather dynamic—the storm when you first come in is lingering all around your view. You can see the storm head on the horizon and all the way around to the clearing right over the Halls of Valor. But like I said, it progresses into that lighter, brighter mood. Then you’re in the forest and you’re not on the big mountains—but the mountains are all around you.

Trevor: There’s also a lot of really cool juxtaposition in Stormheim. You have these harsh rocky cliffs, but interspersed there is this verdant green running through it. It’s very much like the Scottish Highlands.

It definitely feels like a place that you would find Vikings and that kind of thing. It also has these cool changes in environment where you’ll go from these nice rolling green hills to the mystic city of Haustvald, made of stone—it’s almost like a giant crypt. Then there’s Helheim, where everything feels very much like you’re in the underworld.

Ely: We tried to show show that the Vrykul here have a long history, and have been here a lot longer than in some of other zones you’ve encountered them previously. There’s more stone in their architecture. Haustvald is a very good example where they’ve actually burrowed down into the rocky ground and built this old, crypt-like temple—it’s all built of stone. We wanted to show that they’ve been here, that they thrived here, versus just recently showing up like they did in Northrend.

Trevor: Their cities, Skold-Ashil and Hrydshal, are very much fortified. You can tell that these people have lived in this land and they fought for the land. There are high walls, too. People probably tried to take it from them, but they stood their ground. They have this really hardy, fortified civilization here.

Ely: There’s really a history and connection to the land that they’ve been living on.

Q. Which locations would you say are some of your favorites, and why?

Ely: Oh yeah. I like Haustvald. It’s my favorite area in the whole zone.

Trevor: I was going to say that, too—probably Haustvald. Just from a visual standpoint. When you go in, it’s got this really weird sense of being both simultaneously gigantic and claustrophobic. You see these big monoliths, but then you’ve got these little tombs that you would be going into. It really speaks to what the mystics are who live there, because the mystics are the Vrykul masters of life and death. The place they live looks like a giant stone tomb.

Don: And then you have the Runewood all around it, too. It’s this mystical forest that’s just awesome to see, with a talking tree named Vydhar. That area just sings.

I also really like the Kvaldir area in Tideskorn Harbor. It’s where the Kvaldir tribe are originally from, and it tells the story of how they first came into contact with Helya and ended up being cursed. It’s a super creepy awesome area that’s not quite like any other in Legion.

Ely: Then there's the obvious, Helheim.

Trevor: Yeah, Helheim is sort of the easy obvious answer. It got knocked out of the park.

Don: It goes back to the theme of imposing. The statues are imposing, along with the mountain and the Halls of Valor. Then once you get into the depths of Haustvald and into Helheim, you see Helya—and she’s huge. It’s grand in scale, and there are these moments that are like something out of epic literature.

Trevor: How about Vrykul, dragons, Kvaldir, oh, and lest we not forget, grappling hooks. Basically, when we set out to do Stormheim our general goal was to try and create this Norse epic where the player is the character in the middle of it. So if you’re a fan of Vrykul culture, if you want to learn more about the Kvaldir, if you dig dragons. . . .

Trevor: What else do you need to hear other than Storm Dragons?

Ely: This zone has such a great main storyline, but it has such great side stories, too—some really cool and funny ones that lend charm to the zone.

Don: Tension between the Horde and Alliance has been building since the Broken Shore and the demon invasions, and this is the zone that kicks off more of that. It’s red versus blue right out of the gate, which then leads off into this epic story. It then returns to Alliance versus Horde again later. If that’s still fresh in your mind and you want to chase down Sylvanas, then this really is the zone for that.

Q. What is it that will bring them back to this zone? We know there are World Quests and Dungeons to look forward, but what else?

Trevor: I’m not going to say why, but the Sixtrigger brothers. There’s also Shield’s Rest, which is a maximum-level area off the east coast of Stormheim and out in the water. It’s like an ancient burial ground that’s being raided by Kvaldir. They’re trying to get these powerful souls like the mystics that have been there forever. There are also some dragons there too.

Ely: And grappling hooks. There are lots of treasures to find and little nooks and crannies to explore.

Don: This is also where you can collect the best-named herb in the game of all time, Fjarnskaggl.

Trevor: You also get to fish up the Oodelfjisk.

Ely: Some of the best named profession materials ever are in Stormheim. And you get to talk with the tree Vydhar more—well, the tree talks to you.

Don: I think the Kvaldir is also a good point to bring up. Without spoiling anything, we’ll say that Helya’s not done, so you may have to come back to deal with the Kvaldir.

Trevor: There are world bosses there too, so during your level-up experience you may have gotten killed by Nithogg a time or two. When you return at max level, you’ll be able to get your revenge for that.

Q. Is there anything else that players should look forward to that you haven’t mentioned yet?

Trevor: I think the big thing is, there is a big central storyline in Stormheim and it’s massive in scale, it’s heavy, so it may be tempting to just keep following that road, but every now and then you’ll want to branch off to the side because there are some really fun little things to break up that flow. You might meet some memorable cool characters; you might have some fun things happen that aren’t part of the main story.

Don: Some of the most memorable things might be the ones we don’t send you directly to that you just find. There are a lot of really awesome side quests we added in.

Don: Yeah, we didn’t place any of those hook points on accident. They’re worth following and if you’re not a demon hunter, maybe take some goblin gliders with you just in case you find yourself in a precarious situation.

There’s also a lot of verticality to the zone. Highmountain is the tallest zone, but Stormheim probably has the widest range of high and low points because it comes out of Highmountain and goes all the way down to sea level. It’s one of the reasons it looks so imposing—the cliffs.

Ely: It has a long view distance too. You could probably glide a long way.

Trevor: Another little tip: if you’re leveling up in the Runewood and your screen gets dark and it starts to snow—run.