Share
Tweet
The real story of this tournament lies with the players—some of the best we’ve ever seen. With role-swapping, class-hopping, and eye-popping talent, eight of the best teams in North America have fought with everything they have to get to the Championship Final. Want to know more? View the leaderboard here. 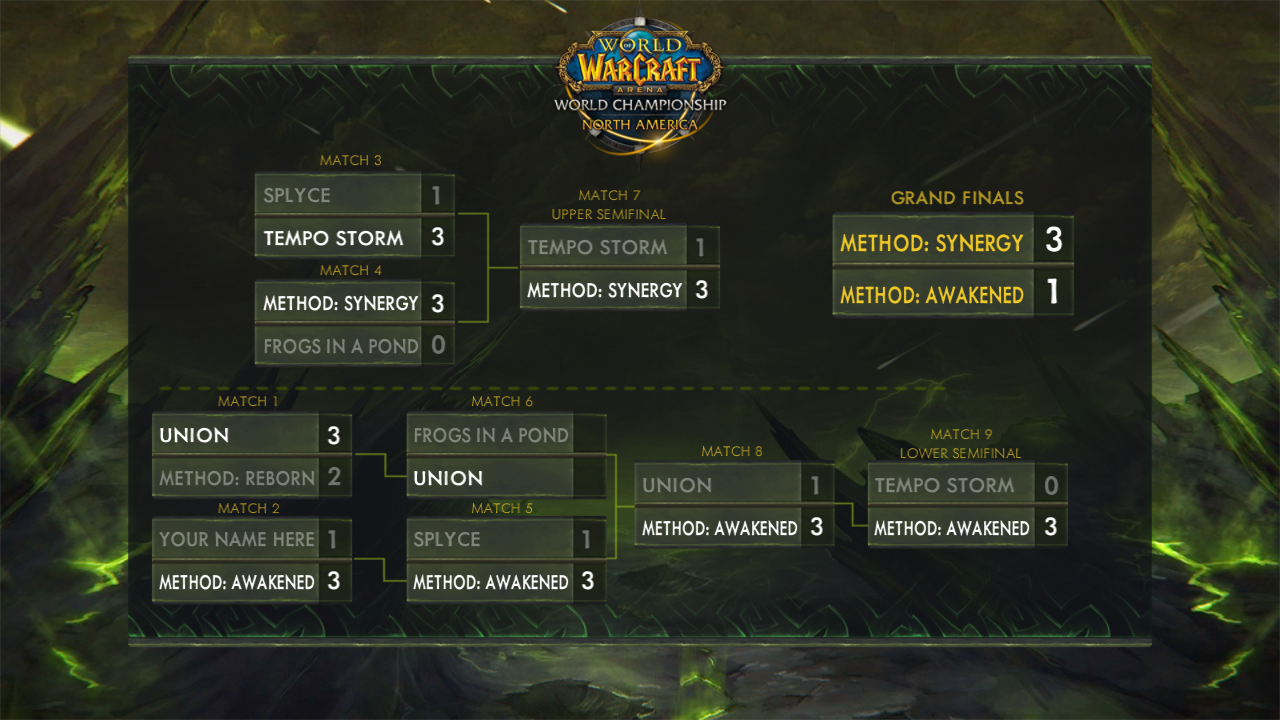 The biggest upset of the day was Tempo Storm’s loss to Method: Synergy. Synergy have placed 2nd in Cup #2, 3rd in Cups #1 and #3, but never taken that coveted top spot—until now. Synergy took down Tempo Storm 3-1 to make it to the final, with Your Name Here, Splyce, and Union all taken down, defeated 3-1. The addition of Trill the Windwalker—a new addition to the roster—seemed to do the trick. Method: Synergy won’t the only team with a new face. Method: Awakened added Wizk to the mix, and there’s no doubt it was a change for the better. After placing 9th three times in a row, they came 4th and were looking good for the finals, appearing to charge through the lower bracket. Tempo Storm took the opportunity to challenge Awakened again, but Awakened showed no sign of slowing down, beating the tournament favorites with a 3-0 win.

The final itself was a power play between two Method teams: Awakened and Synergy. Both teams have been practicing solidly for months, competing in every cup, to reach their goal of coming first. The opener of the series was nail-biting and tense, with Awakened coming out on top at 3-2. Synergy, not dropping a single series before getting to the finals, now needed to be defeated twice by lower-bracket team Awakened. What followed was a series of decisions, compositions, and competition that put even the most hardened spectator on the edge of their seat. When Series 2 began, and despite the previous series loss, they brought out exactly the same composition: Unholy Death Knight, Windwalker Monk, and Resto Shaman. They kept their cool and stuck to what they knew.

The pay-off saw Synergy beating Awakened twice in a row.  In a bid for survival, Awakened swapped out to Balance Druid, Shadow Priest, and Restoration Shaman. This was exactly what they needed to beat Synergy’s Windwalker Monk and Death Knight, but in retaliation Synergy reverted to a line-up that has always served them well: Affliction Warlock, Unholy Death Knight, and Restoration Shaman. This combo is known for doing a ton of damage, but in this team, they are close to unbeatable. Synergy took the match in less than seven minutes, earning themselves first place.

The Road To Championship Glory

Cup #5 concludes the qualifiers for the North American Championship finals. All 12 teams have been decided and are preparing for their trip to the MLG Arena in Columbus, Ohio. At the final, players will be tested to the best of their abilities, in person, on stage and in battle - fighting for $100,000 and, of course, a post at the World Championship at BlizzCon 2017. Who will be crowned Champions?

More information incoming on the NA Championship, so check back for announcements and details. And don’t forget: you now have a dedicated esports page to keep up with all events around the world.
Tags
esportswow esportspvpwow arena championships