With patch 7.3 on the horizon, we thought it was time to share some updates to combat animations for several casting classes. Similar to what we did with the melee classes at the launch of Legion, these updates are all about priests, mages, Restoration and Elemental shaman, and some additional refinements to Restoration druid casting animations! We’re also continuing to work on even more enhancements for additional classes at a later point in development.

A little over two years ago, we set our sights on revamping combat animations. The team has wanted to renovate it somehow, but what exactly does that mean? To determine the answer, our development leadership put together a small group of people to come up with a prototype of what we thought could use some cleaning up. You are currently experiencing the fruits of this work with the new melee animations. Our final goal was to create new melee moves that would make the game feel better, but not change how the game was played. During this prototype phase, we also came up with a plan for casters, but didn’t have time to put it into production until now. Let’s dig into some of the things we did.

WoW has grown a lot over the last decade, and after we took stock of our combat pacing, it was clear that we needed to deliver a much tighter and more responsive experience for every button you press. Back in the days of simply chain-casting Frostbolt, it didn’t really matter how much time it took your character to go from precast to missile launch. Today, you have a suite of spells at your fingertips where cast times have sped up and split-second decision making is key. To help the way the game is currently played, we wanted more timing consistency.

Keeping this split-second decision making in mind for the new cast animations, we found a sweet spot between game play responsiveness and striking, weighty animation. The punchiness of our new animations were working so well, we decided to revisit our original cast animations with a fresh eye on what we had learned—while keeping the style and uniqueness of the classic cast animations for every race. The only thing we touched was the time it took to hit the cast pose since, in the live game, each race’s cast timing is different. This ensured that every spell cast with our new class animations or our iconic racial animations had the same punchy and responsive feel.

Ultimately, our main goals remained the same for our next chapter in updating combat; retain the individuality and identity of what came before, pay off epic moments over the course of a battle, and update the game as seamlessly as possible. If we did our jobs right, it should feel as though it has always been this way. Our work should blend into the background so you can focus on melting, smashing, cursing, crushing, igniting, stabbing, purifying, and exploding your foes into unfathomably tiny bits.

With animation, the first things you might notice are all new caster ready idles. Currently, after you cast a spell, the character goes back to their stand animation. For this revamp, we wanted to create distinct idles that conveyed the personality of the caster much like how a melee class does while holding two swords or a giant, two-handed axe. This was tricky since class fantasy is very personal and no two people have the same idea on how a mage or shaman should stand. 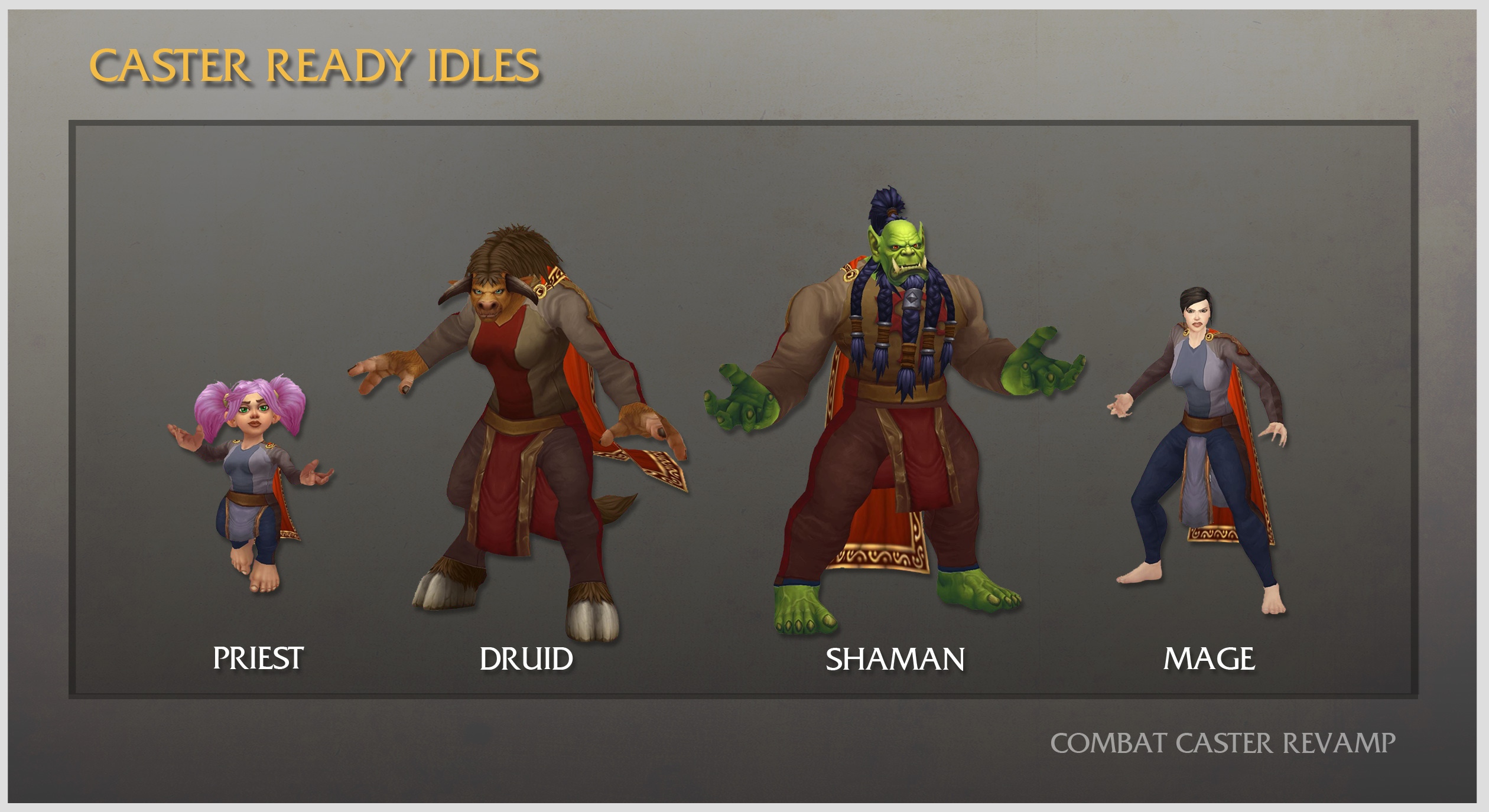 We also looked at what we could do with spells that had a cast time. Currently, directed and omni (area of effect) spells loop as the spell builds up before firing. These are distinct animations we had no intention of removing, but to fit the idea of a spell building up, we thought a strong, progressive motion showing the character pulling magic from the ground or gathering it from the air would look cool. So that’s what we did with the new precast animations. Again, class fantasy was a factor with this—how exactly does a shaman pull magic from the ground?

We also created a bunch of quick, single-handed animations to add variety to instant spells. These look especially neat as you run around casting with your right and left hands. Beefier spells now have stronger straight arm moves, while curses fire with a flick of the wrist.

The next step for revamped animations was revamped spell effects to go along with them! This was a tricky undertaking, especially for iconic spells. The goal was to pay homage to the original—but in some cases, we needed to completely reimagine the spell. It gave us a chance to define what each kit of magic should look like and with higher fidelity than what was possible in classic WoW. With that in mind, we aimed to work our way towards snappier, more modern spell effects without trampling too much on sacred ground. Overall, we needed the combat for casters to look and feel more exciting and rewarding while keeping a unique visual identity for each class and spec.

For example, with the Blizzard spell, we kept all the same elements of the original, but brought them in line with more modern effects. We also defined what makes this frost mage-like (wispy, magical, precise) as opposed to shaman frost (naturalist, elemental, realistic) or death knight frost (bitter, aggressive, sinister). This is a good example of an homage spell, where we wanted to keep the intention of the original spell.

With Arcane Missiles, on the other hand, we reimagined what it could look like. We kept the iconic structure of five bursts of four missiles, but got creative with the rest. What should a mage’s Arcane magic look like? Chaotic firecracker-like sparkle explosions? We think so!

The effects revamp effort was all about the balance between paying homage to the original feel and reimagining everything. How do we breathe new life into each spec, but make sure we retain the core identity? How do we build a tighter, more cohesive class fantasy around spells players have been casting for 12+ years? How do we make sure all these fancy new effects don’t tank your graphical performance? It has been a long, careful balancing act between what we, as artists, want it to look like and what you, as players, want it to feel like. We’re psyched about how it turned out and we hope you’re equally psyched to run around casting your improved spells!

We hope you enjoyed this behind-the-scenes look at the new caster visual updates. We had lots of fun creating all these animations and effects and look forward to hearing your thoughts on them.