Once the shining heart of troll civilization, Nazmir is now a bleak swamp riddled with ruined reminders of its former greatness. In the current troll capital of Zuldazar, stories are passed down from generation to generation cautioning children to behave, lest Nazmir’s twisted practioners of blood magic come to snatch them from their beds. And those who dare brave the swamp have a terrible habit of disappearing, never to return. The blood trolls of Nazmir are the monsters that haunt every Zandalari child’s nightmares—and for good reason. 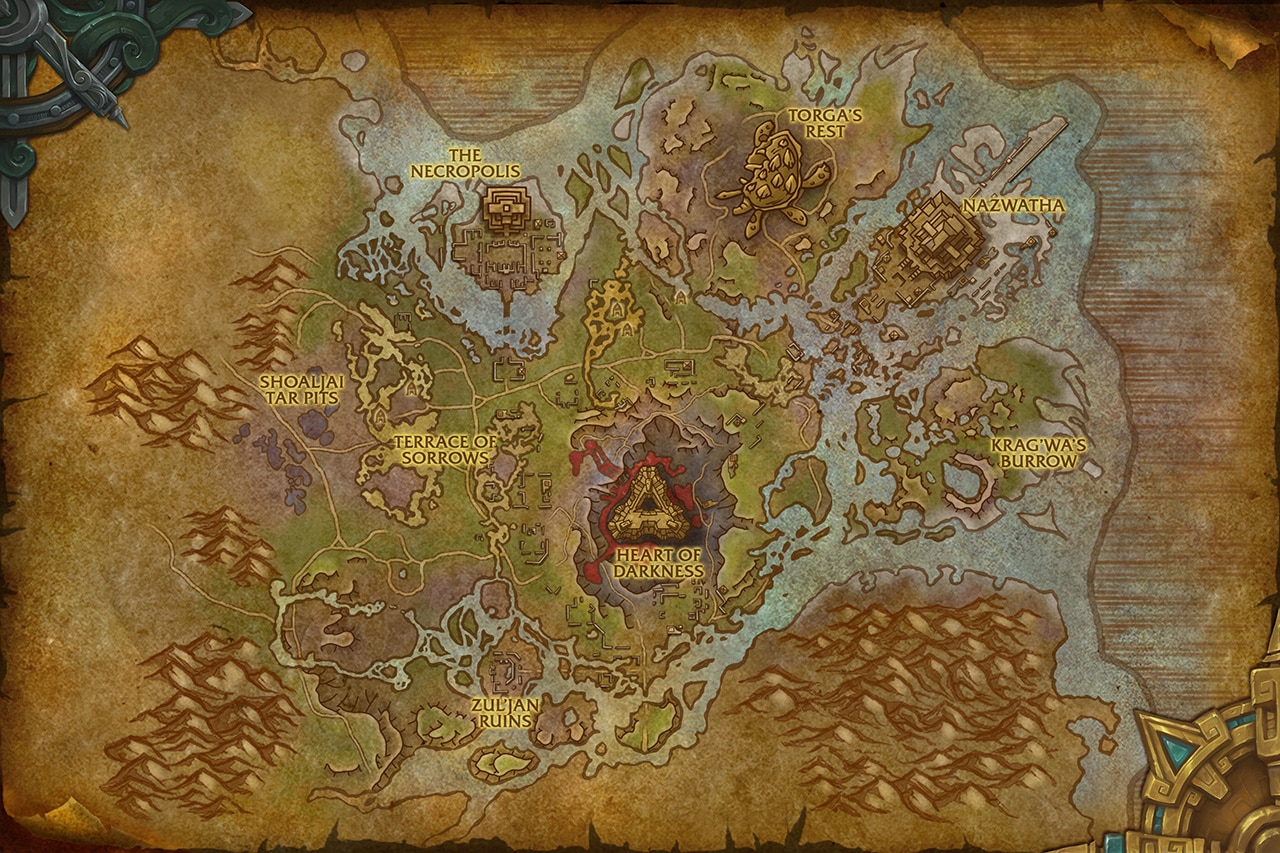 Nazmir is a primordial swampland, replete with a diverse ecology of insects and dangerous beasts. Many of the once grand temples and buildings now lay in ruins, scattered throughout the region like broken teeth. Vegetation has encroached upon the stone walls and buildings, reclaiming the land piece by piece. Your treacherous journey alongside Princess Talanji begins along one of Nazmir’s many broken and waterlogged pathways. 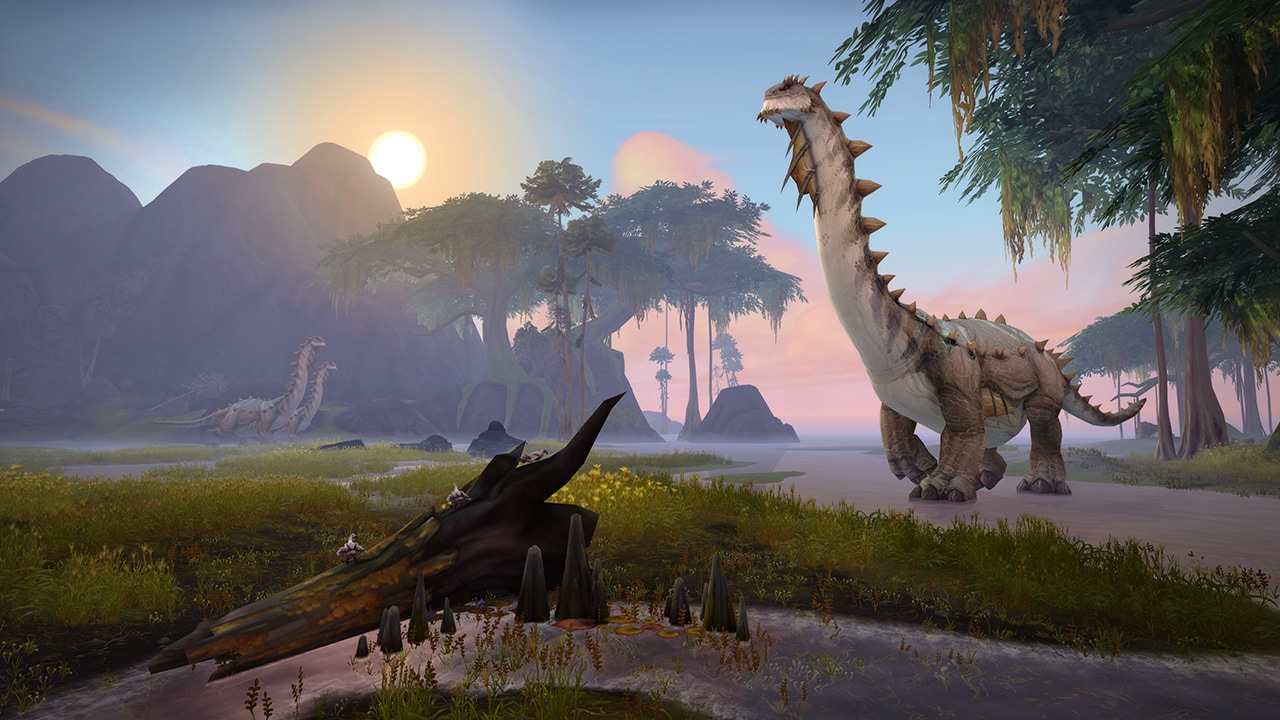 It is here that the blood trolls perform vile rituals in tribute to their blood god G’Huun. While the Zandalari King Rastakhan and his advisors have ignored this threat for too long, his daughter, Princess Talanji, is prepared to take this menace head-on—and aligning with the four loa in Nazmir may be the only answer.

Your first mission: seek out the bat loa Hi’reek, the loa of death Bwonsamdi, the turtle loa Torga, and the frog loa Krag’wa, and appeal to them for help—if they can give it.

The blood trolls present a serious threat to the Zandalari. With the power of their blood god, they seek to destroy the great troll nation—and potentially spread beyond their island borders. They fuel their voodoo with profane blood rituals, harnessing undead monstrosities to do their bidding. Many who enter the swamps do not leave, instead becoming a sacrifice to G’huun.

Sodden marshes and tributaries mark the landscape of Nazmir, fed by the grand waterfalls spilling from the cliffs of Zuldazar high above. The Razorjaw River and Shattered River both wind through Nazmir as well, contributing to the marshes and wetlands that dominate the region.

Things to Try: Feel Free to Forage
Keep a keen eye out for edible plants and other items throughout the region which can provide a small boost to your powers as you travel. You may need all the help you can get as you make your way deeper into the swamp.

Each step in your search for the loa of this region will take you further into the heart of blood troll territory—and provide an opportunity to demonstrate to the Zandalari the value of the Horde as their allies.

Loa Do Call to You

Allying with Bwonsamdi, the Loa of Death, comes with advantages. But as with any deal with death, it also comes at a steep price.

In the area surrouding Bwonsamdi’s temple, blood troll strongholds and villages burble with the blood of their victims, and evidence of their depravities mar the landscape. These signs serve as a warning and declaration that the blood trolls are to be feared—that they are the ultimate power within Nazmir, and that those who do not bend to their will will be destroyed. 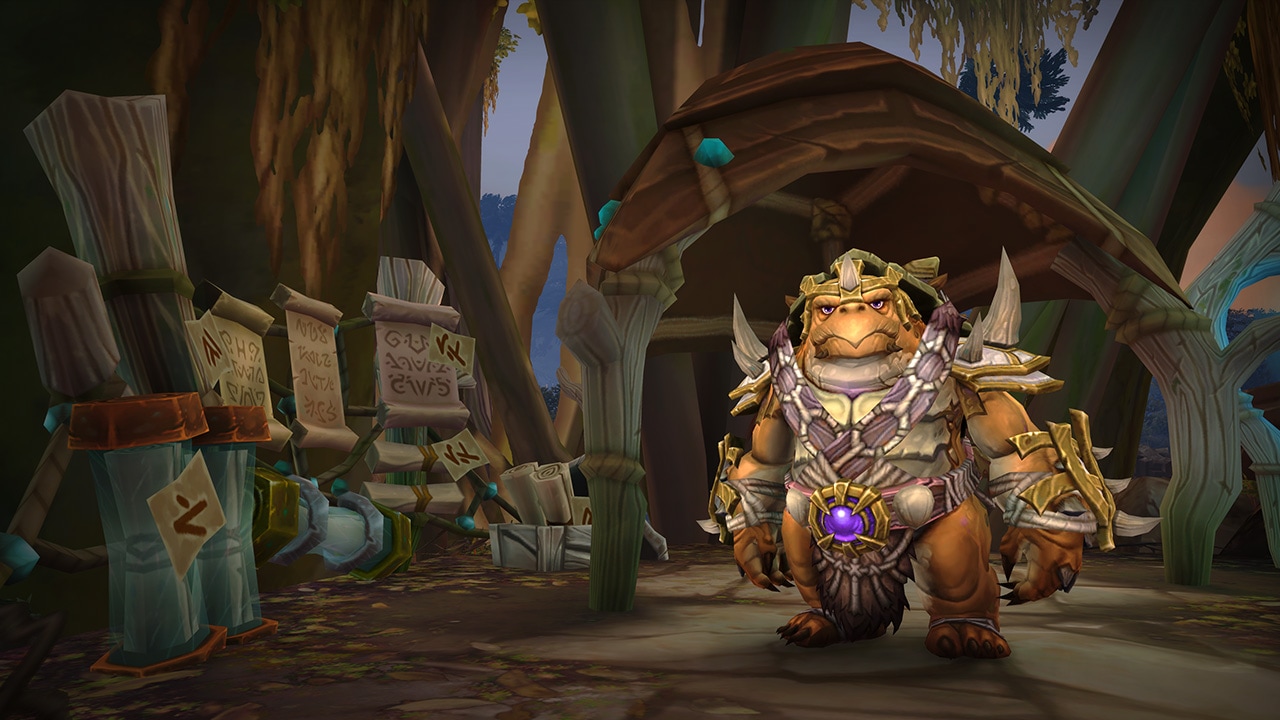 Did you know?
“Ma’da” in Zandali means “mother.” Though not a term distinct to the blood trolls, the males of the tribe use it as a term of respect for the females of their society.

You won’t be the only one braving the fury of the blood trolls, however. Always in search of a good story, the tortollans make a regular pilgrimage to visit the turtle loa Torga despite the omnipresent danger the blood trolls pose. Don’t let their enthusiasm for a rousing yarn fool you, though; they are able allies in the fight against the blood trolls—especially if they think they’ll emerge with a worthwhile tale to tell.

Blessings of the loa be upon you as you make your way ultimately into the Underrot (a 5-player dungeon in Nazmir)—you’re going to need it as you take on the horrors that fester within.

The Underrot Dungeon Spoilers Inside! 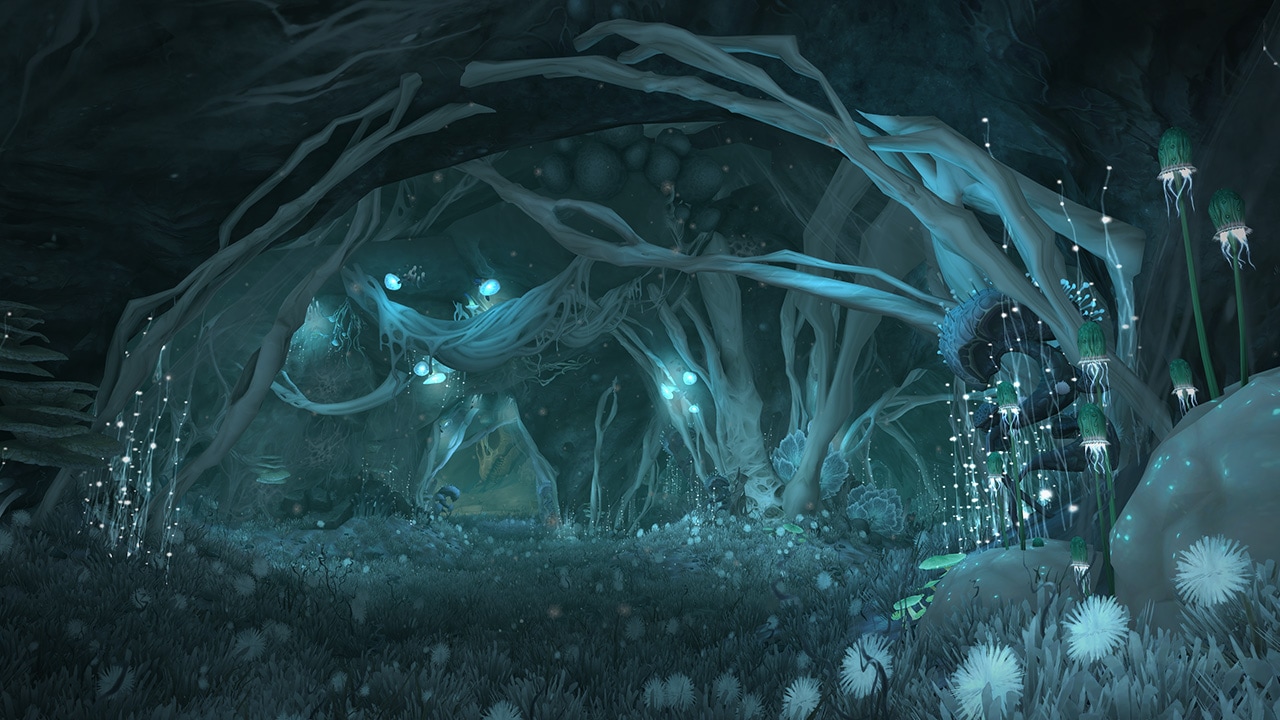 A vast coastline surrounds Nazmir to the north and east, with the Shattered River demarking the southern border along Zuldazar, all offering bountiful opportunities for fishing, hunting, swimming, and treasure hunting. To the west you’ll find the bubbling Shoaljai Tar Pits, where the cloying scent of smoke drifts up from vents within the earth, choking the air with a haze of ash and dust. Just west of the tar pits on the westernmost border, the pathway into the arid desert of Vol’dun awaits, offering even more opportunities to earn your way into the good graces of the Zandalari.