Located in the north west of Zandalar, Vol’dun is a vast and unforgiving land. Dunes of sand, salt flats, and bone breaking rocky terrain stretch from coast to coast, meeting up with Nazmir to the east and Zandalar to the south. Danger here comes as much from the arid and unrelenting landscape as it does from the creatures who eke out a living here. 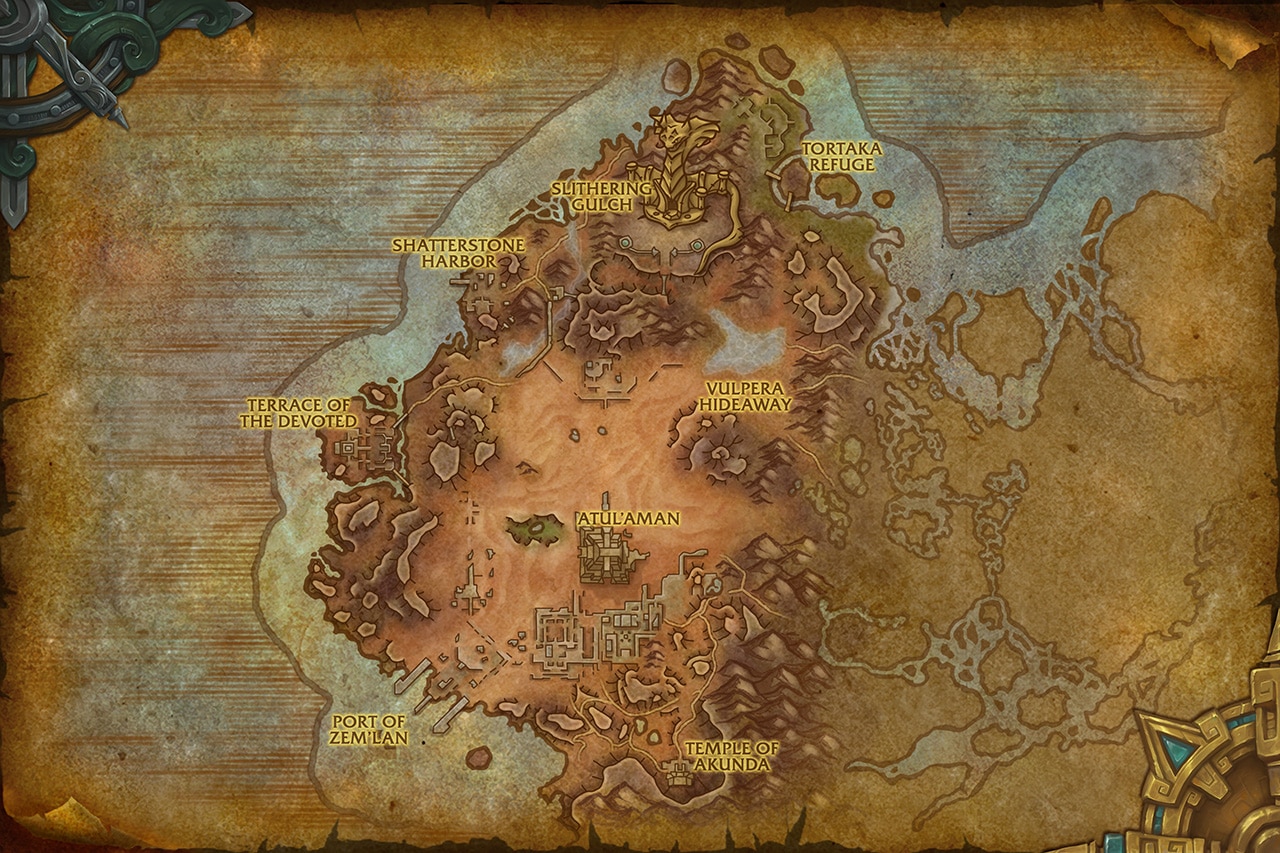 The region of Vol’dun serves as a death sentence for those exiled from Zuldazar. But the land's apparent lack of of life is merely a mirage, and there’s more to be learned if you scratch beyond the surface.

Princess Talanji has heard word that her father’s general, Jakra’zet, is secretly sending troops into Vol’dun. If you are to prove the value of the Horde to her and secure the might of the Zandalari fleet, you’ll need to venture into this inhospitable terrain to seek him out, learn of his plans, and put a stop to them before he takes down the entire Zandalari empire.

Venturing from the capital city will prove to be dangerous for you and your small team, and simply crossing the border would tip your hand to those who serve the general. As with any flight into hostile land, you’ll need to be prepared . . . for anything.

General Jakra’zet’s secrets lie somewhere in the sands. Head into the dunes and recover proof that will help remove him from power.

As you explore this harsh land, you’ll meet the fox-like vulpera—a keen and intelligent race of nomadic scavengers capable of turning what they find into opportunities to thrive. But not all who live here are free. Once an ally to the Zandalari trolls, the reptilian sethrak have taken to subjugating anyone they can as slaves, and the vulpera are an easy target for their machinations. If you’re to survive in Vul’dun and get to the heart of general Jakra’zet’s plans, you’ll need all the allies you can get. Lending aid to these creatures is bound to pay off. 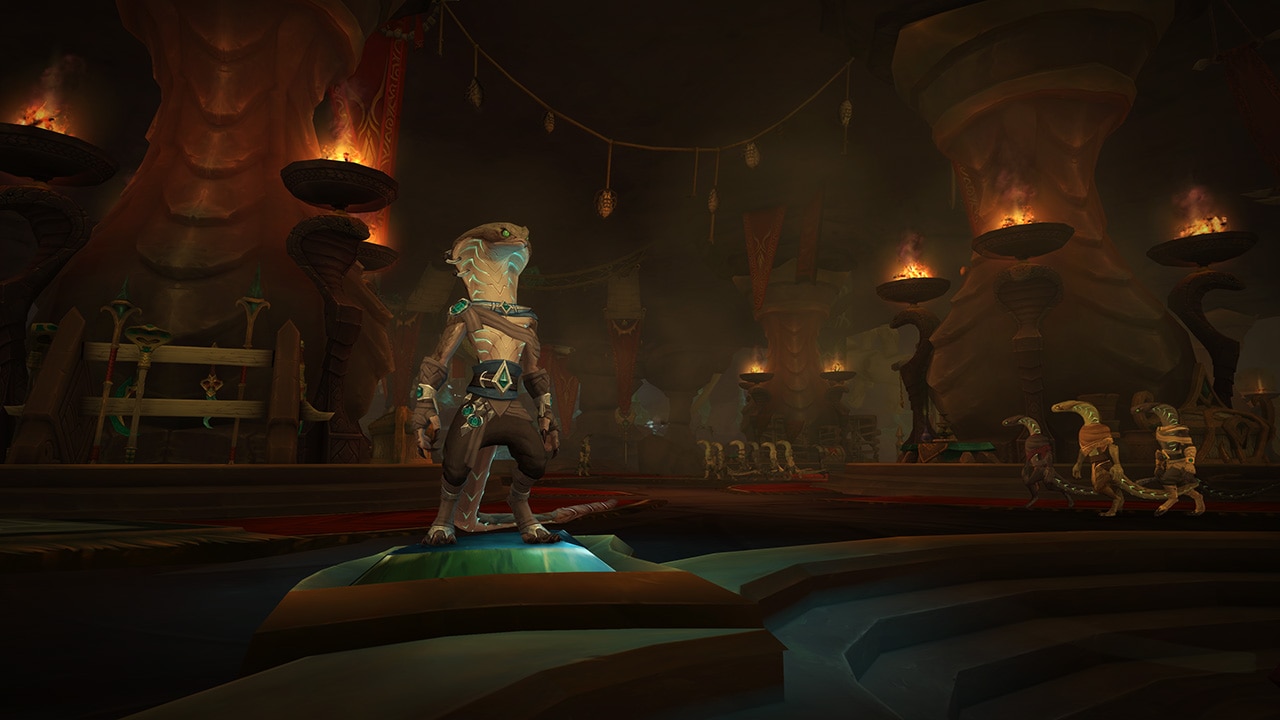 Vulpera caravans travel from hideaway to hideaway, peddling their wares, engaging in trade, and spreading information they pick up along the way. If you’re fortunate, you’ll be able to catch a ride on one and learn a bit more about these resourceful inhabitants.

To the south looms the Temple of Akunda. Like Nazmir and Zuldazar, this land is served by several of the loa. Many who seek sanctuary travel to this temple to forget the ills of the past and serve the great loa Akunda. There is more to discover here, and with a little extra effort, you’ll be able to get in this loa’s good graces.

Things to try: If you come across a rickety plank in the sand dunes southwest of Atul’aman, you can take part in a little sandboarding. Just make sure you keep your mouth and eyes covered to avoid sand in your eye or getting a little extra protein in the form of a desert bug.

North east of the Temple of Akunda, an outpost of outcasts has taken root near Atul’aman. Despite frequent sandstorms and short supplies, they’ve begun to herd alpaca here among the harsh terrain. Keeping the herd safe from the likes of hyenas, Vol’duni Dunecrawlers, and saurolisks can be trying at best, and surviving off the land has hardened these people. They don’t trust outsiders, and marauders holing up in the nearby Scorched Sands Arena regularly plague this fragile settlement, stealing what little supplies they have.

Rest Your Head at the Goldtusk Inn

Tucked away near Atul’aman and nestled within a deep cavern is the hidden Whitebloom Oasis. Inside you’ll find the Goldtusk Inn, which is run by a quirky innkeeper—Rhan’ka—with a few curious requests. Lending Rhan’ka aid, a hand or two, and a bit of your bravery (or maybe a lot of it) will land you a few extra benefits, such as a new flight path and fully functioning inn you can make your own haven from the brutal heat of the desert.

Just to slightly north of Whitebloom Oasis, a vulpera known as Rikati sells some curious “food” and drink such as Bilewing “Honey”—it’s probably not what you think it is. Nothing in this desert really is. If you’re the adventurous type and have a bit of an iron stomach, you may want to stop by and explore new culinary frontiers.

Did You Know? Feeding Brutosaurs: If you stop by Rikati’s wagon, you’ll want to pick up a delicacy called Snake on a Stick. Feeding one of these to Brutosaurs in Vol’dun, Nazmir, and Zuldazar will earn you the achievement Eating Out of the Palm of My Tiny Hand. No one wants large, hungry, carnivorous Brutasaurs, and feeding them is fun.

Caught between the Sethrak and the Sea

If you’re looking for tales of pirates, then look no further than the Port of Zem’lan to the southwest. It wouldn’t be worth visiting if there wasn’t word of a curse and treasure. The sounds of gulls seem peaceful even amongst the broken vestiges of the port, and sethrak still patrol nearby. There are tales and mysteries to unravel here.

The Ashvane Company has infiltrated the southern region of Vol’dun. If you didn’t already have to worry about General Jakra’zet, sethrak slavers, cursed pirates, marauders, and a hostile desert filled with creatures bent on killing and (probably) eating you, adding these particular Kul Tirans to the mix isn’t going to make things any easier for you.

On the northeastern coast along the Whispering Crag, the tortollans have set themselves up in the Tortaka Refuge. They are plagued by naga to the east, dwindling supplies, and very large spiders. If you’re the least bit arachnophobic, Vol’dun won’t be high on your list of vacation spots.

If you visit the Slithering Gulch to the south, you may discover some of Nazmir’s tortollan pilgrims. Their journey incomplete, they now stand before the sethrak up for auction to the highest bidders.

Where Even Snakes Fear to Tread

To the north, the Skycallers’ Spire dominates the landscape. A large hooded snake looms above, crackling with lightning. It is here that you’ll find the Temple of Sethraliss and uncover the darkness within.

The Temple of Sethraliss Dungeon

Centuries ago, Sethraliss, a powerful snake loa, sacrificed herself to stop Mythrax from unleasing his master upon Azeroth. After the battle, her devoted followers transported her remains and built a temple around them while they awaited her rebirth. Now a dark force stirs within this sacred temple that seeks to twist her power toward nefarious ends.

Aderiss and Aspix: This pair of powerful sethrak is charged with guarding the temple’s entrance to prevent anyone from interfering with their master’s plot.

Merektha: Merektha is the product of foul experiments to produce an army of unstoppable beasts. With her clutch of eggs beginning to hatch, this mother is on the hunt for victims to serve as food for her ravenous children.

Galvazzt: With the corruption of her temple, Sethraliss’ command of lightning has created twisted elementals that roam the sunken champers. The most powerful of these creatures is called Galvazzt, capable of eradicating anything that crosses its path.

Avatar of Sethraliss: The Heart of Sethraliss is in the grips of a terrible power that seeks to corrupt her. Her avatar must be restored before this evil takes root and she is reborn as a dark loa capable of destroying the whole of Vol’dun.

There is plenty to explore throughout Vol’dun, and what first seems like a wasteland comes to life with deadly vibrancy once you scratch the harsh exterior. The sand-bleached bones of giant beasts litter the land, long since picked clean and polished to a gleaming smooth by the shifting sands. Brief moments of reprieve from the heat can be found to the north in the small stretch of marsh and in the caverns and oasis tucked away from the unrelenting sun.

Remember, water can make a difference between life and death, for you and for others who may desperately need it. You never know what a difference a drop or two can mean at the right time, in the right place.

Beyond Vol’dun to the east are the fetid swamps of Nazmir, and to the south you’ll find the sprawling ancient capital of the Zandalari, Zuldazar. Bringing the Zandalari fleet into the might of the Horde will take grit and determination. Surviving Vol’dun could take everything.