The time is at hand to take on new challenges across Azeroth, including the Uldir raid, new world bosses, and the first season of Rated PvP and Mythic Keystone dungeons. Which will you take on first? 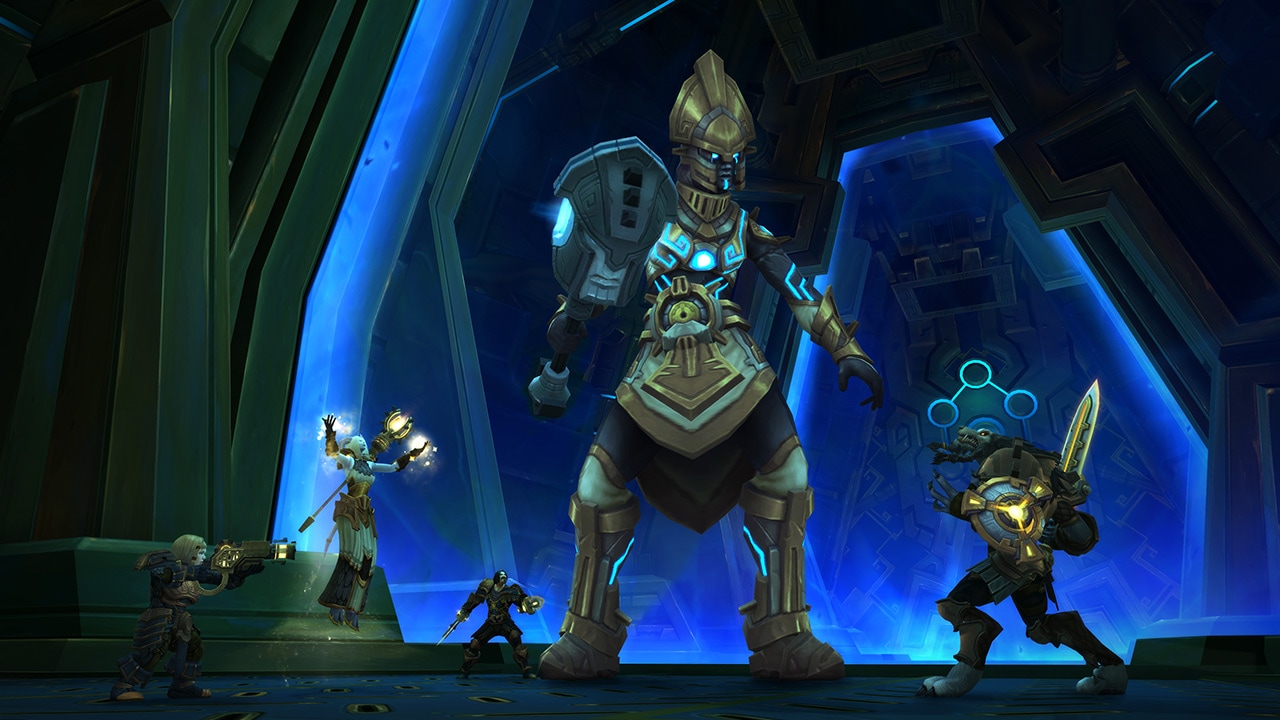 Millenia ago, seeking to understand the nature of their eternal foe, the titans constructed this sprawling underground facility to research and quarantine captured specimens. They hoped that by studying the void energy that bound the Old Gods, probing it for weaknesses and reactions, they could find some way to neutralize it. They were horribly, horribly wrong. The facility was sealed away so that the horrors within would never be unleashed upon Azeroth. But now those seals have broken. . . .

While many of the greatest threats to peace in Azeroth are locked away in ancient vaults or perched atop soaring fortresses, others walk brazenly beneath the open sky. As self-preservation drives the wise to seek shelter from these terrors, glory awaits any brave heroes who wish to test their mettle against the most powerful foes.

T’zane (Nazmir)- Animated by the powerful voodoo of the nearby Necropolis, Tzane stalks the swamps of Nazmir in search of more souls to consume.

Ji’arak (Zuldazar)- This mighty pterrodax has a roost high up in the mountains of Zuldazar, where the air is too thin for most lungs to draw breath, and life struggles to take hold. Occassionally she descends upon the swamps below in search of heartier meals to bring back to her brood.

Hailstone Construct (Drustvar)- Built by the original inhabitatns of Drustvar, the Hailstone Construct was built to defend these lands from any invaders. However, years of dormancy have left it addled, and it now sees all residents as threats, vowing to destroy them all.

Azurethos, The Winged Typhoon (Kul Tiras)- Azurethos, the terror of the Kul Tiran seas, marshals the power of wind to force enemies out of its roost, cause waterspouts, and capsize ships. He has earned his reputation as one of the deadliest beasts in Kul Tiras.

Warbringer Yenajz (Stormsong Valley) – Dark whispers shroud Stormsong Valley, as rumors of eldritch creatures spread throughout the countryside and families mark their doors with runes from the local scribes. Often dismissed as exaggeration, sometimes housewives’ tales fall far short of the true horrors that lurk in the realm beyond our sight.

Dunegorger Kraulok (Vol’dun) – Revered by all trolls but the Zandalari especially, the bones of the giant reptiles of Zandalar dot the landscape. But as dark energies stir beneath the sands, sometimes that which was meant to remain dead, does not. Kraulok walks the sands once again, blinded by rage and the endless agony of his dying moments. Woe to those who find themselves in the beast’s path. 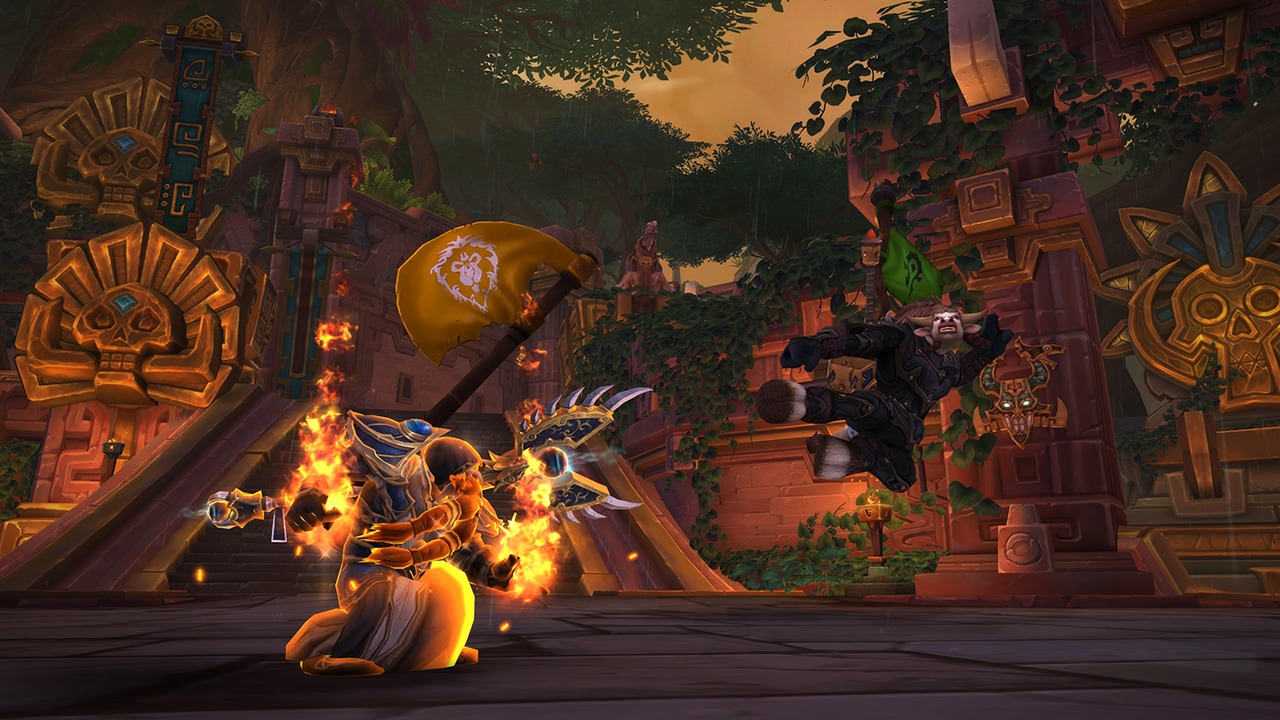 Do you have what it takes to climb the ranks? Battle for Azeroth PvP Season 1 kicks off with new rewards and two new Arenas — Hook Point and The Mugambala.

Now, every week brings new rewards for PvP, and Conquest points are back as a measure of PvP activity. You’ll earn a specific piece of raid-quality PvP gear each week, adding up to full sets of increasing quality over the course of a season. Players who participate in rated PvP can now begin climbing the ratings to receive more-powerful rewards. Both weekly rewards and the occasional end-of-match piece of PvP gear will have higher item levels based on your rating:

As you earn Conquest, visit Marshal Gabriel in the Salt and Shanty Inn near the Ashvane Docks in Boralus or Xander Silberman at Mugambala in Zandalar to exchange it for new PvP items. Those are also the locations where you’ll find the new PvP weekly cache chest.

Read about rated PvP updates and rewards here and prepare to leap, blink, sneak, or charge your way into the action. Check out the Player vs. Player Leaderboards to keep track of who has what it takes to make it to the top. 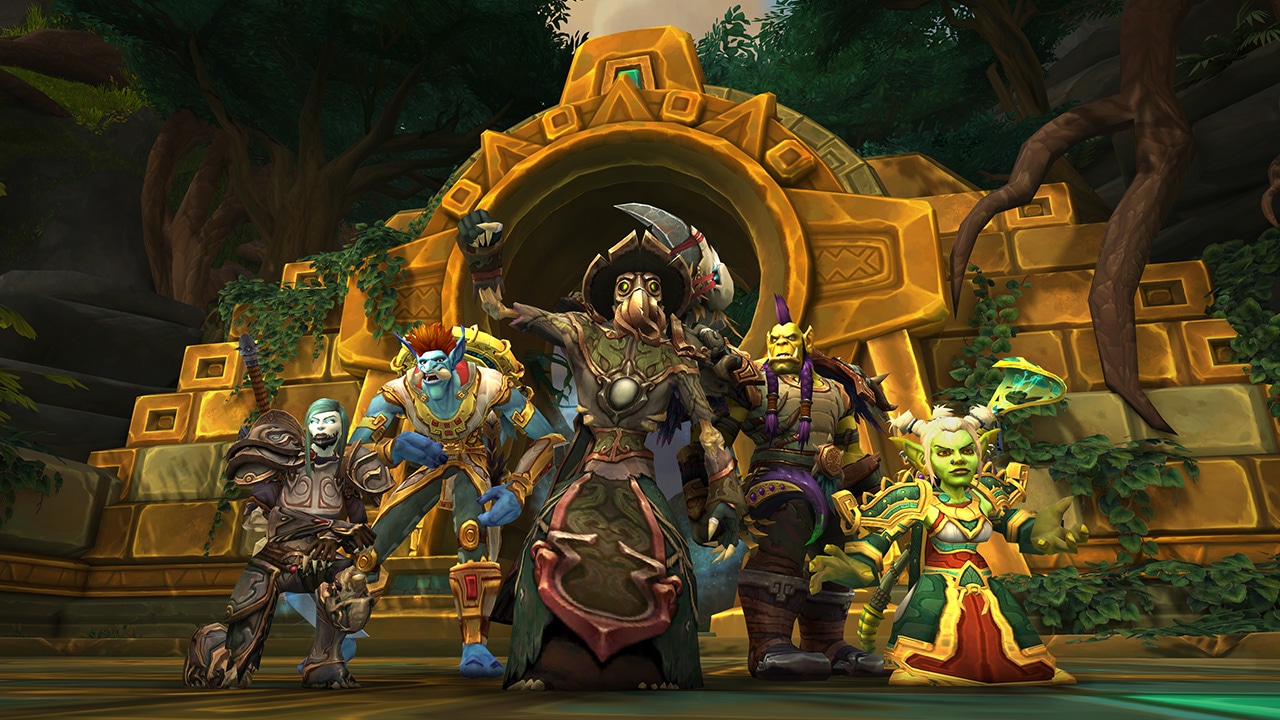 We’ve added a new layer to Mythic Keystone dungeons with the introduction of Mythic dungeon seasons that align with the latest content and rewards. As a part of Season 1, we are introducing the use of a new seasonal affix—Infested—which will appear on level 10 or higher Keystones.

The Infested affix reflects the extent of the corruption of the blood god G’huun as it seeps out into Azeroth to infect select denizens of each dungeon. With each new season, we’ll be changing out this third affix to keep players on their toes.

Who will make it to the top of the Mythic Keystone Dungeon Leaderboards?

What are you waiting for? Get in there!