After a high-stakes chase across the seas, the Alliance and the Horde find themselves facing an ancient enemy who has long been lurking in the depths: Queen Azshara and her fearsome naga army. With their ships decimated by Azshara’s ambush, the Alliance and Horde must establish a new base of operations and join forces with new allies in the perilous realm of Nazjatar. 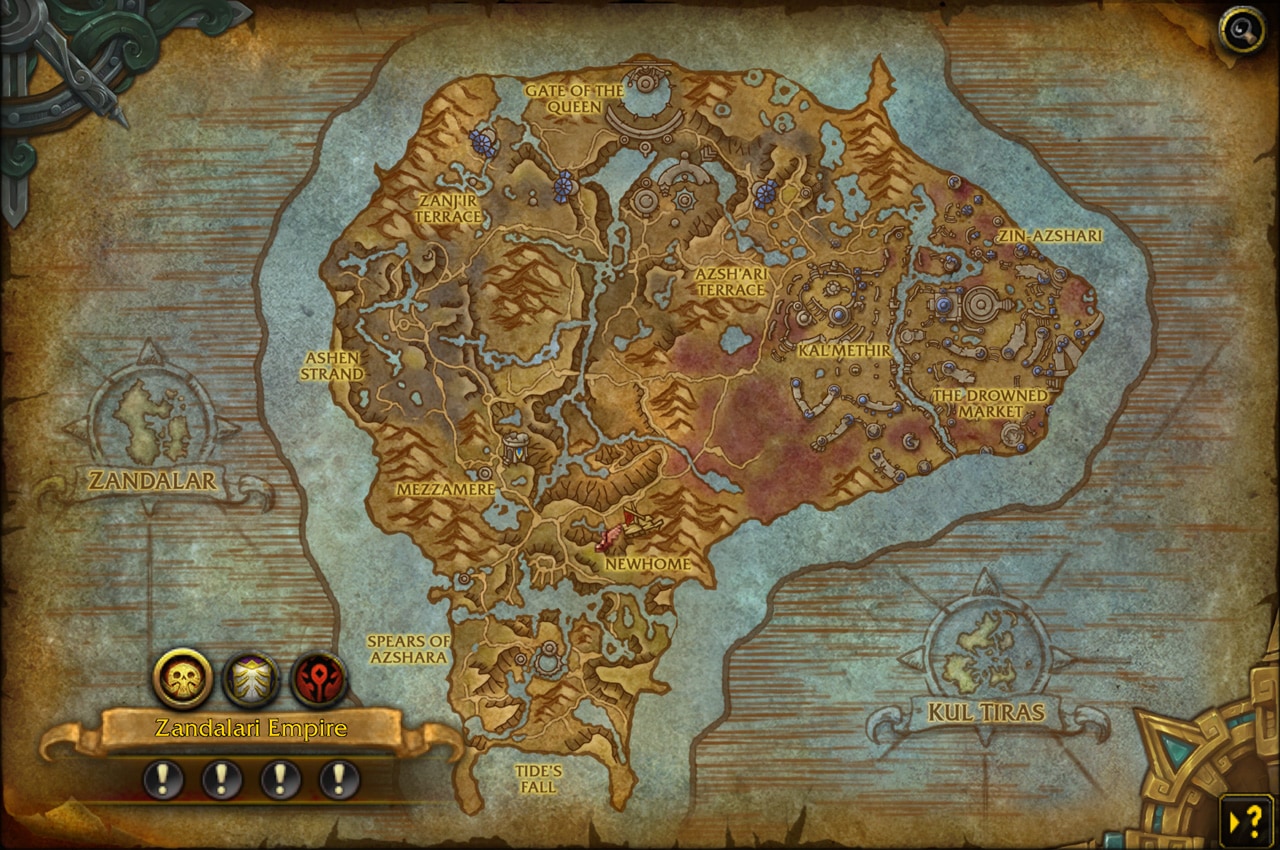 Before you can begin your journey to Nazjatar, you’ll need to reach level 120 and complete the quest Unlocking the World, which grants access to World Quests in Battle for Azeroth. When Rise of Azshara arrives, you’ll receive a summons from either Genn Greymane or Nathanos Blightcaller, setting in motion the events that will lead you to Nazjatar.

After Azshara’s catastrophic assault leaves your ship in ruins, you’ll wake up among the wreckage to an unfathomable sight: a massive hole in the sea where previously there was only ocean. Your first order of business will be to search for survivors—but Azshara’s army is still on the hunt, and before long you’ll need to traverse impossible cliffs and waterfalls in search of a safe haven. With the help of newfound allies known as the Unshackled, the Horde will find refuge in Newhome in the southern portion of Nazjatar, while the Alliance will join forces with the Waveblade Ankoan in Mezzamere just to the northwest.

Once you’ve established your base of operations, you’ll need to progress through the zone’s story line before you can engage in the wider array events and activites across Nazjatar. Shortly after Horde players reach the quest Down Into Nazjatar and Alliance players reach the quest A Brief Respite, you’ll unlock access to a vast amount of content throughout the zone—and Nazjatar is yours to explore. 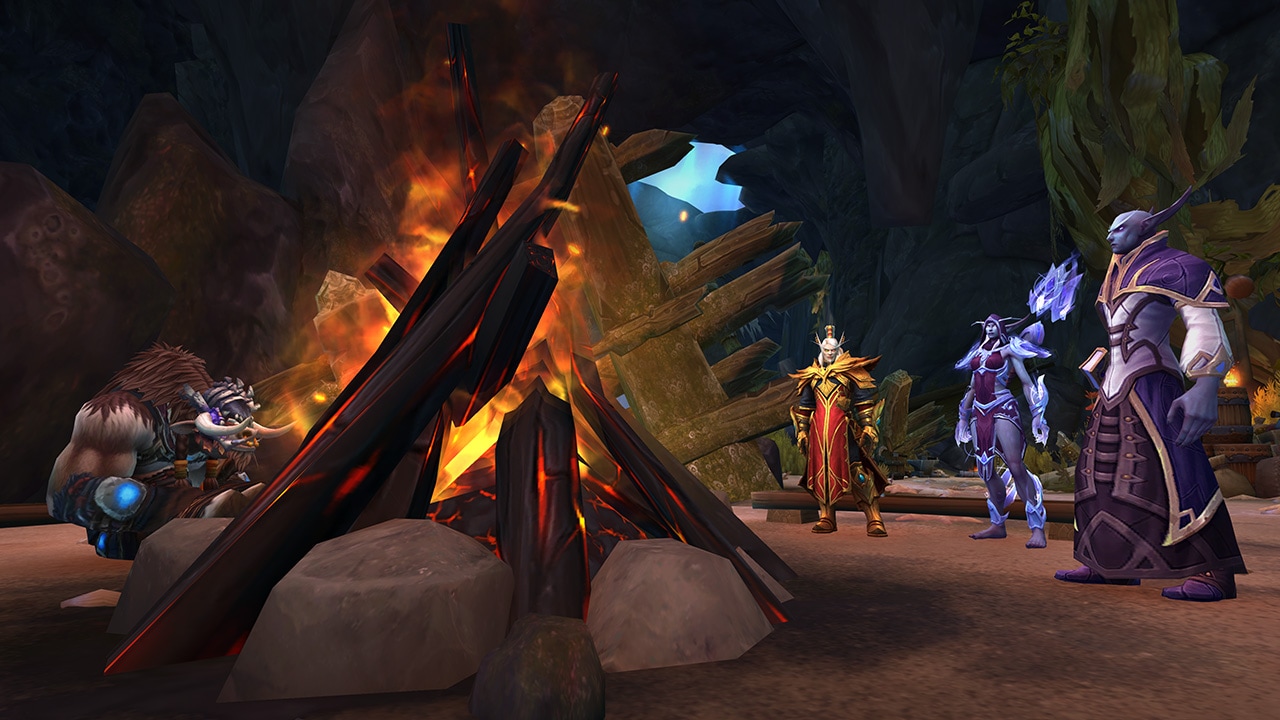 Nazjatar is a dangerous and beautiful place, filled with coral forests and unfathomable deep-sea creatures skittering through passageways and clinging to rockfaces. Secrets that have remained submerged for millennia are now exposed to the surface world, including the ancient ruins of Zin-Azshari, the once-glorious capital of the kaldorei. Further in the depths, the beautiful and terrible city of the naga—and the palace of the Queen of Tides herself—awaits.

To help navigate the perils of Nazjatar, Alliance heroes will join forces with the Waveblade Ankoan, a faction of deep-sea warriors skilled in surviving the dangers of the ocean. Meanwhile, Horde heroes will find worthy allies in the Unshackled, a disparate group of makura, sea giants, and gilgoblins who have banded together to seize their freedom from enslavement by the naga.

As you provide aid to your new allies and prove your worth, your new friends will return the favor by offering the services of their most seasoned warriors and hunters. These special combat allies will journey alongside you as you face the hazards of Nazjatar, growing in power as you complete their special quests—and ultimately unlocking new abilities and rewards.

Earning reputation with the Waveblade Ankoan or the Unshackled will provide access to new items that can be purchased from their quartermasters using gold or Prismatic Manapearls. For example, Alliance players will be able to tame and ride the mighty Ankoan Waveray when reaching Exalted with their allies. You’ll be able to earn reputation and additional rewards by completing World Quests, taking part in daily activities, hunting rare and powerful creatures, and more as you explore the expanse of Nazjatar.

Did You Know? Just a Little Boost

Nazjatar is a dangerous area filled with strange and incredibly powerful creatures, but you can gain an edge by taking advantage of the many combat bonuses the zone has to offer. Some can simply be found on the ground, like the Poisonous Spiral Leaf, which increases your damage for a short duration. Others can be found by looting creatures during your adventure, or defeating powerful foes. Explore and find what’s waiting to be discovered!

As you explore Nazjatar, you’ll collect Prismatic Manapearls, a new kind of soulbound currency you can spend to purchase Benthic tokens and upgrades. These bind-to-account tokens grant a piece of upgradable Benthic gear specific to your armor type (cloth, leather, mail, plate), starting at item level 385. With enough time and effort, players can dedicate their hard-earned Manapearls to upgrade pieces to ilvl 425, just shy of Heroic-level raid gear (ilvl 430). Learn more about Benthic Gear in our earlier preview.

Summons from the Depths

While in Nazjatar, Queen Azshara will periodically rally her naga forces to summon forth a powerful creature from the depths for a zone-wide event. Each such event will occur in two phases: The first phase will require you to clear out some of Queen Azshara’s elite naga forces within a limited amount of time, while the second phase will require players to work together to defeat the monstrosity the naga have called. Keep an eye out for a skull-shaped icon on your map indicating that one of these events is underway.

From time to time, players will be called upon to face five of Azshara’s elite commanders, who will appear in various locations throughout Nazjatar (available only when War Mode is off). Defeating any of these five formidable foes will provide you with Prismatic Manapearls—and the more you take down, the more Manapearls you’ll have to spend at your favorite vendor. 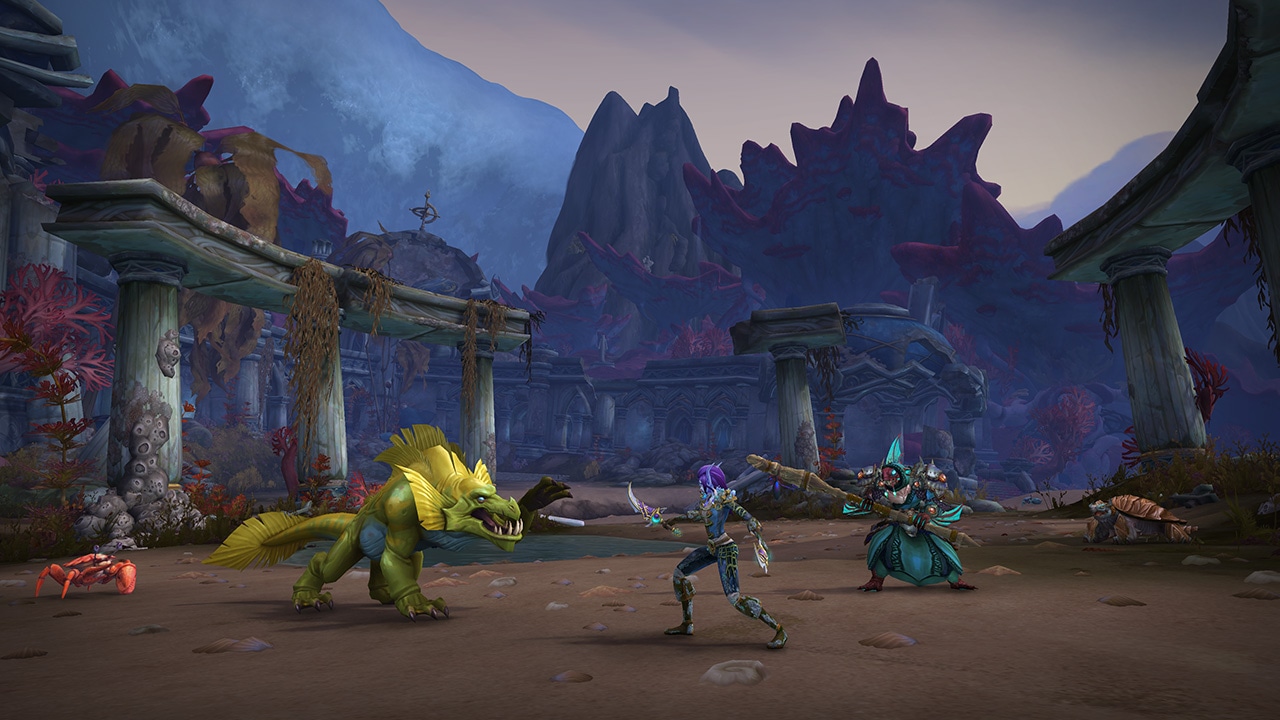 Players who have War Mode enabled in Nazjatar will be able to take part in a new PvP event to earn rewards and achievements. During the Battle for Nazjatar event, the Horde and the Alliance will need to coordinate their forces to capture and hold five points across the zone: Ala’thir Spire, Lemor’athra Spire, Thoras’tal Spire, Tidal Conflux, and Zin-Azshari.

Once towers are captured, the Horde and Alliance will begin to accumulate points for each tower under their control. The first faction to reach 10,000 points, or whoever has the most points at the end of 45 minutes, will claim victory.

While exploring this dangerous new territory, keep your eyes out for two new World Bosses: Ulmath, the Soulbinder and Wekemara.

Wekemara: Summoned from the depths by an ancient naga ritual, Wekemara arises once more to wreak havok upon the surface.

Your journeys in Nazjatar will ultimately lead to Queen Azshara’s seat of power in The Eternal Palace, a new raid featuring 8 new bosses, including the Queen of Tides’ most devoted champions. Learn more about this new raid and its release schedule in our preview.

In Nazjatar, you’ll experience the next chapter in the ongoing story of Battle for Azeroth, come face-to-face with long-forgotten legends, and earn a trove of treasures, mounts, pets, achievements, and more along the way. Prepare to brave the dangers of Nazjatar when Rise of Azshara arrives on June 25!