The Mythic Dungeon International (MDI) is back on Twitch starting August 10th with the MDI Summer Season!  If you want to follow along with some of the best dungeon racing teams in the world, here’s a breakdown of what you need to know!

Sprint to The Finish

We had an exciting first half of the year with the MDI Spring Finals in Sydney, Australia, but that was only the halfway point. Spring Champions Method NA and runner-up Method EU have already secured their spot at the BlizzCon Global Finals, but there’s still four spots up for grabs. Here’s how to follow along!

All MDI Cups will broadcast on Saturdays and Sundays local region time on the Warcraft Twitch channel. See below for the broadcast dates and start times by region.

We’ve ramped up both the prize money and points this season: Each Cup will give players a chance to get their share of USD $15,000 prize money and 750 MDI points. The two top point-earning teams from the East and West will join Method NA and Method EU at the BlizzCon Global Finals! The LAN tournament at BlizzCon boasts a prize pool of at least $250,000 due to the direct support from the community, so you can bet the teams will be giving it their all for a spot in the finals! 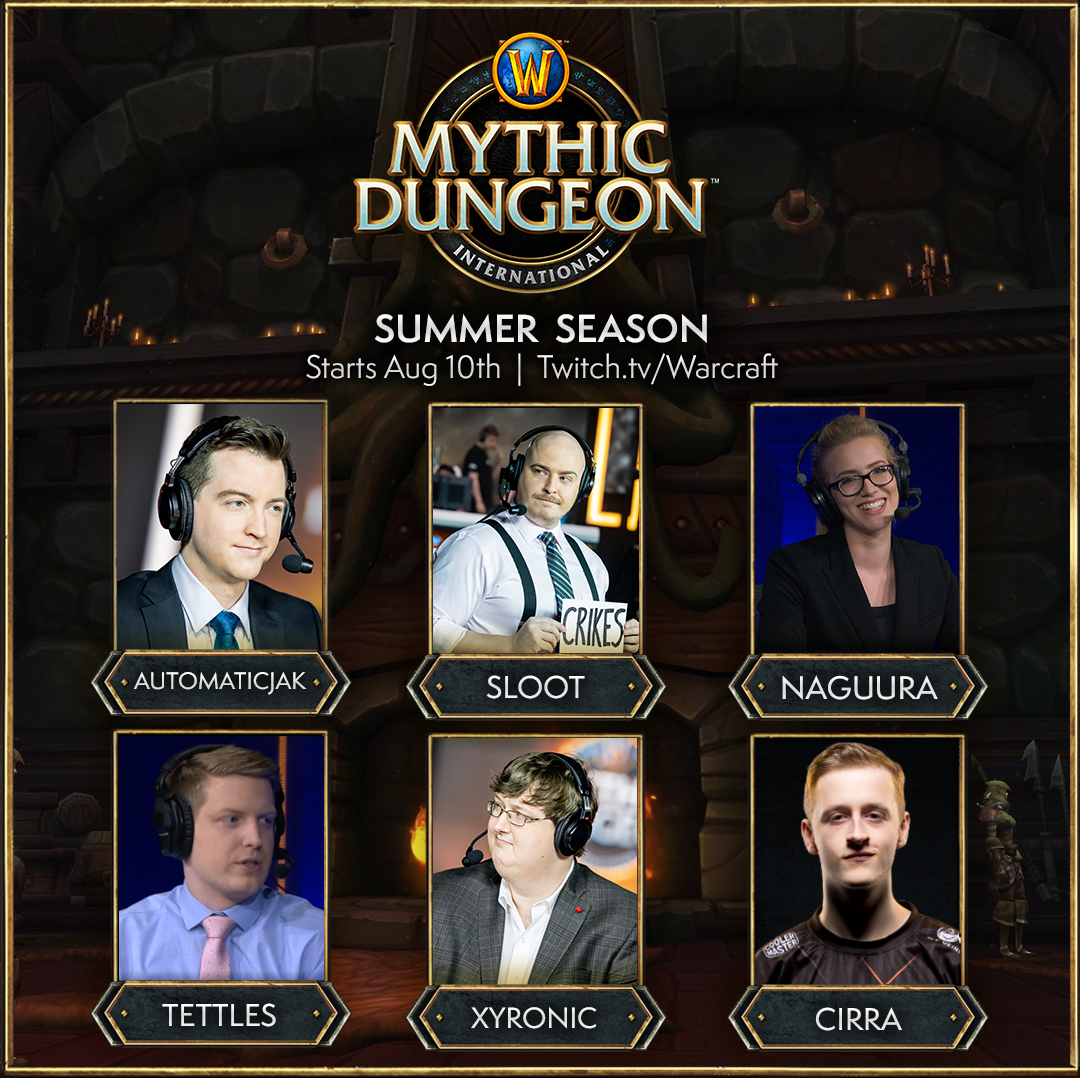 The bald and beautiful Ted “Sloot” Bacinschi has been playing World of Warcraft since the early days. He’s been raiding just as long, if you count stepping foot in Zul’Gurub, getting to the first boss and wiping over and over again. Sloot isn’t just a tank on the desk, he’s also a tank extraordinaire in game as a master of many tank specializations. Sloot’s been involved in all of the Mythic Dungeon tournaments since the start of it all with the Tespa Collegiate Dungeon race.  An iconic figure in the North American and European PvE scenes, you can often find him streaming.

Daniel "AutomaticJak" Anzenberger has been raiding in World of Warcraft for many years and is perhaps most well-known for his healing guides on YouTube and Wowhead, where he specializes in Holy/Discipline Priest and Mistweaver Monk play. He has been creating guides for over five years and enjoys sharing his knowledge and love of healing, so if you’re a healer looking to step up your game, or a tank/DPS looking to understand your healers more, AutomaticJak’s is the voice that will help you do that during MDI.

Former captain of the 4-man MDI team Sinking Ship, and self-proclaimed #2 Balance Druid, Peyton “Tettles” Tettleton’s appearance on the MDI desk will be one for the ages. Overall, his goal for the broadcast is to help viewers understand what makes the runs successful. “There is a lot of nuance in Mythic Plus and being able to teach the path to victory for each team is important,” he said. You can catch him on his stream or on YouTube where he primarily focuses on PVE content. He also authors the Wowhead Balance Druid Guide. He loves a good-natured meme and ridiculous photoshopped photos of himself.

Fresh off his performance in the World First race, Alex "Xyronic" Tatge is an Affliction Warlock extraordinaire. You can find his guides on Wowhead, where he breaks down everything a master of shadow magic would need to know, including talent builds, Azerite gear, spell rotations, macros and addons, Mythic+ guides, and more!

New to the desk this season is former MDI World Champion Rory “Cirra” Singer. Cirra made big waves in 2018 when his team Kjell’s Angels edged out a win over Method NA at the MDI Global Finals in a close Game 5. These days you can find Cirra raiding with Sloot and AutomaticJak in <Future> and running the KeystoneMasters community tournaments. We’re looking forward to him bringing his healing experience to the desk so Jak doesn’t feel quite so lonely.

To stay on top of Time Trial results each week and the MDI Cups, check out Raider.IO, and be sure to follow us on Twitter and Twitch. You can also check out the broadcast schedule on our esports page, in addition to staying up to date on the latest point standings for both divisions. We’ll see you in chat!