As the final season of Battle for Azeroth gets underway, we’re planning something truly spectacular for 2020 with some of the largest LANs we’ve ever held. The Mythic Dungeon International and the Arena World Championship are both bound to provide some of our best esports action yet.

World of Warcraft Esports is moving to YouTube! This means that all the content for the Mythic Dungeon International and Arena World Championship—our live broadcasts and our VODs—will be hosted on the same great platform to make it easier for esports fans to watch.

Welcome Back the Mythic Dungeon International

We are happy to announce the return of the Mythic Dungeon International (MDI), with a new dungeon to challenge competitors and put them through their paces. Things are going to be a little different this year with some exciting changes.

Teams will participate in the division based on where the majority of their team’s players reside.

It wouldn’t be one of the most exciting MDI seasons yet without an in-person LAN. This season’s final will have a massive $300,000 prize pool that our elite teams will compete for. 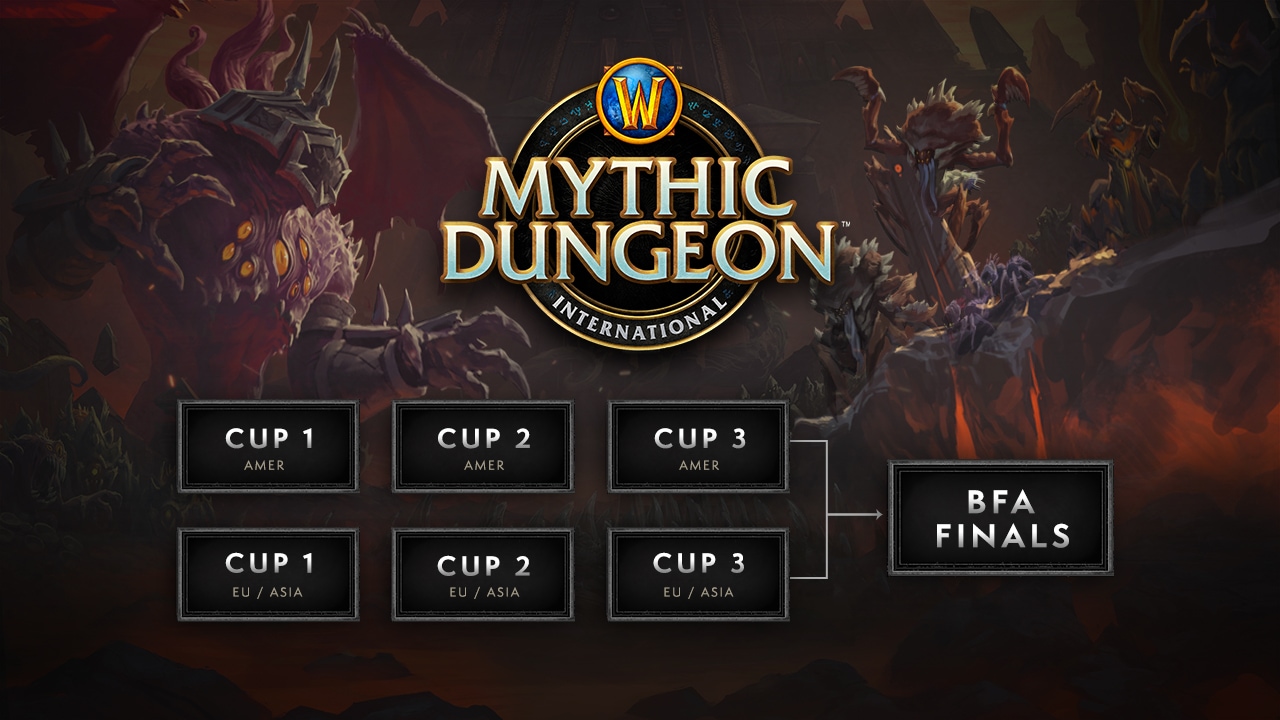 Moving forward, we’re also going to consider all MDI seasons as standalone events with a LAN final to cap each event. This provides us the ability to iterate quickly on changes and upgrades that we think the community will love.

Stay tuned to our MDI esports page for more information on the season beginning in April.

We’ve added a new dungeon to the rotation this year with Operation: Mechagon. This dungeon provides 8 challenging bosses split in two separate wings—Junkyard and Workshop.

With the Visions of N'Zoth content update comes a new season of competitive play and a new Affix to contend with—Awakened.

While the Awakened affix is active, players will discover obelisks throughout the dungeon, which will pull players through the veil to the shadowy world of Ny’alotha. There, players will confront a powerful servant of N’Zoth which they must defeat, or the servant will join forces with the final boss in the instance.

Teams will have to push themselves to their limits (and beyond) to prove they’re the fastest team around.

We can’t wait to see how the competition this season unfolds; in the meantime, we’re preparing for future MDI seasons in Shadowlands. We’ll have more news to share as we get closer to the release of the expansion.

A new year waits for the Arena World Championship

Embarking on the thirteenth year of the Arena World Championship (AWC), we felt it was a good time to shake some things up and will be hosting one final season to close out Battle for Azeroth. There’s even more on the line than ever before.

Beginning in Spring, registration for the AWC’s online qualification cups will open. All eight online Arena cups will award a $10,000 prize pool and AWC Points. Anyone can sign up and test their mettle for glory and cash prizes. 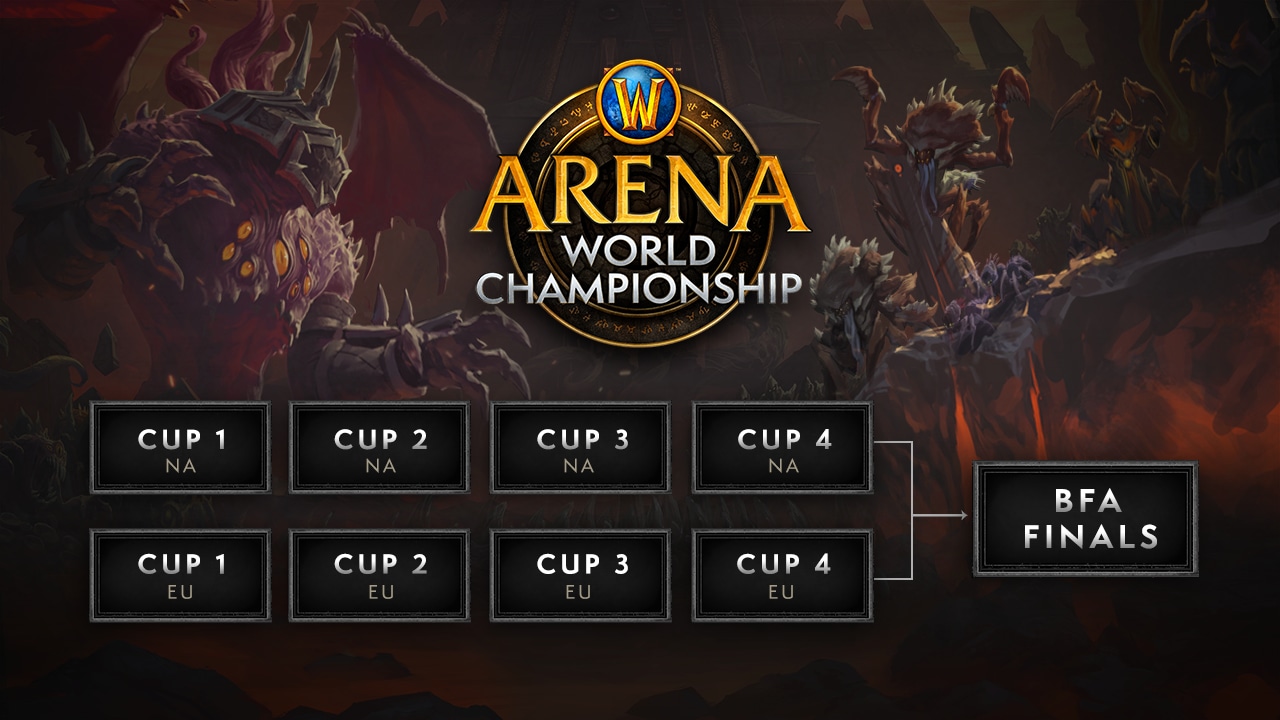 Teams with the most AWC points after all four North American and European cups will be invited to compete in the AWC Battle for Azeroth Finals. There, the eight best teams in the world will compete for a share of the $500,000 prize pool—the largest AWC Prize Pool to date.

Shadows of the imminent future loom. The Arena World Championship will start up once World of Warcraft: Shadowlands has released, and Azeroth’s fiercest gladiator’s will be tested more than ever before.

The first AWC Tournament Series in Shadowlands will host two crucial competitive seasons with online cups and two in-person tournaments, including a mid-year LAN and a finals event which would occur in the Summer, similar to the Battle for Azeroth Finals this year. 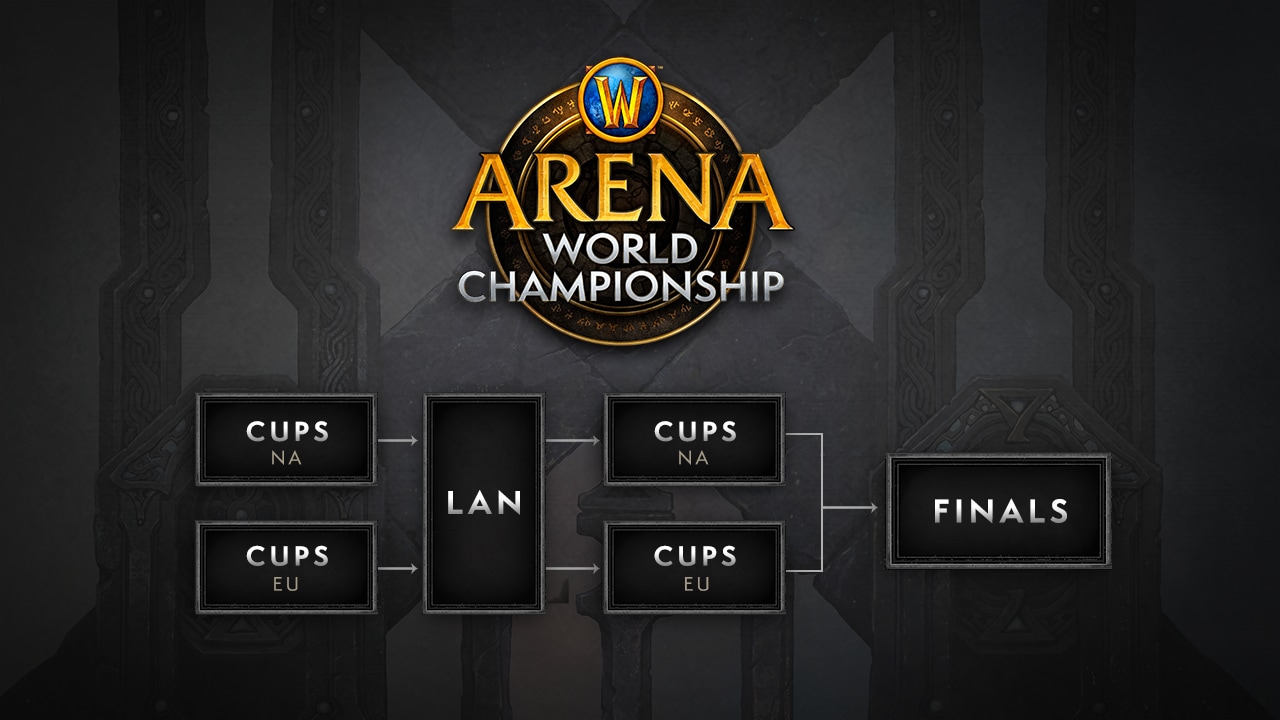 All of these changes to the Mythic Dungeon International and Arena World Championship mean changes to WoW esports events that have typically taken place toward the end of the year, such as BlizzCon 2019. Don’t worry though, we still have plans in the works, and we’ll have more to share later.

This year proves to be an exciting one for World of Warcraft esports and we look forward to sharing all of the exciting news and action with you.

Be sure to follow and bookmark the Battlefy Page in order to be the first to sign up for the first cup. The upcoming schedule and current point standings can be tracked at the official esports AWC website.

Join the discussion on the forums here.