In the realm of Ardenweald, where spirits of nature are reborn, you will help shape the fate of the night fae by protecting their sacred groves against the vile Drust.

If you choose to return to this twilit realm as an ally of the Night Fae Covenant, the friendships you cultivated during your time in Ardenweald will be ready to take the next step.

The cycle of rebirth in Ardenweald is teetering on the precipice of no return. Every grove that dies to the anima drought and is left to rot has been twisted by the Drust into a thorned gateway to Ardenweald, and its pestilence fuels their wicked magic. If you are to save these umbral wilds from a doomed afterlife under the Drusts’ blackened thumbs, you’ll need to restore balance in Ardenweald. To succeed, you’ll need Bwonsamdi’s help, which he’ll lend if you agree to a deal with him. Be wary; for the price of power can be ever shifting.

You’ll also work alongside the dragon Ysera, who has a plan to restore Ardenweald—as well as save Tyrande Whisperwind from the grim fate that befalls all who take up the Night Warrior’s mantle. However, changing the course of destiny is neither simple nor quick. Altering the strands of Tyrande’s fate will be an ongoing thread that runs throughout the story of the Shadowlands.

As you progress through the Night Fae Covenant Campaign and complete tasks for your new allies, you’ll build Renown. Increasing Renown will provide you access to unique rewards from your Covenant.

Covenant Sanctum: Heart of the Forest 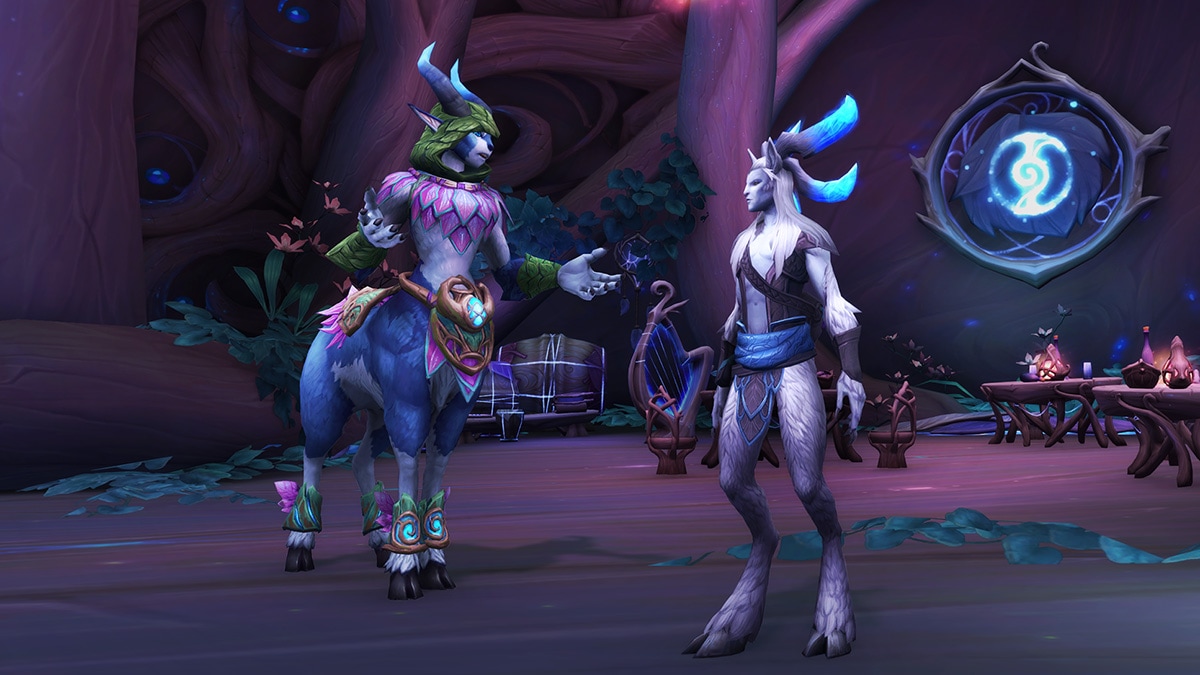 When you join the Night Fae Covenant, you’ll have access to Heart of the Forest, a unique Sanctum available only to their members. As their seat of power, it’s here that you’ll meet with key figures, take on new quests, and store Anima. As you progress through the Night Fae campaign, you’ll also have the opportunity to work on additional feature upgrades within your Sanctum.

Each of the four Covenants have features that they share among them, but they also have a feature that is patently unique to them. For the Night Fae Covenant, it’s the Queen’s Conservatory. 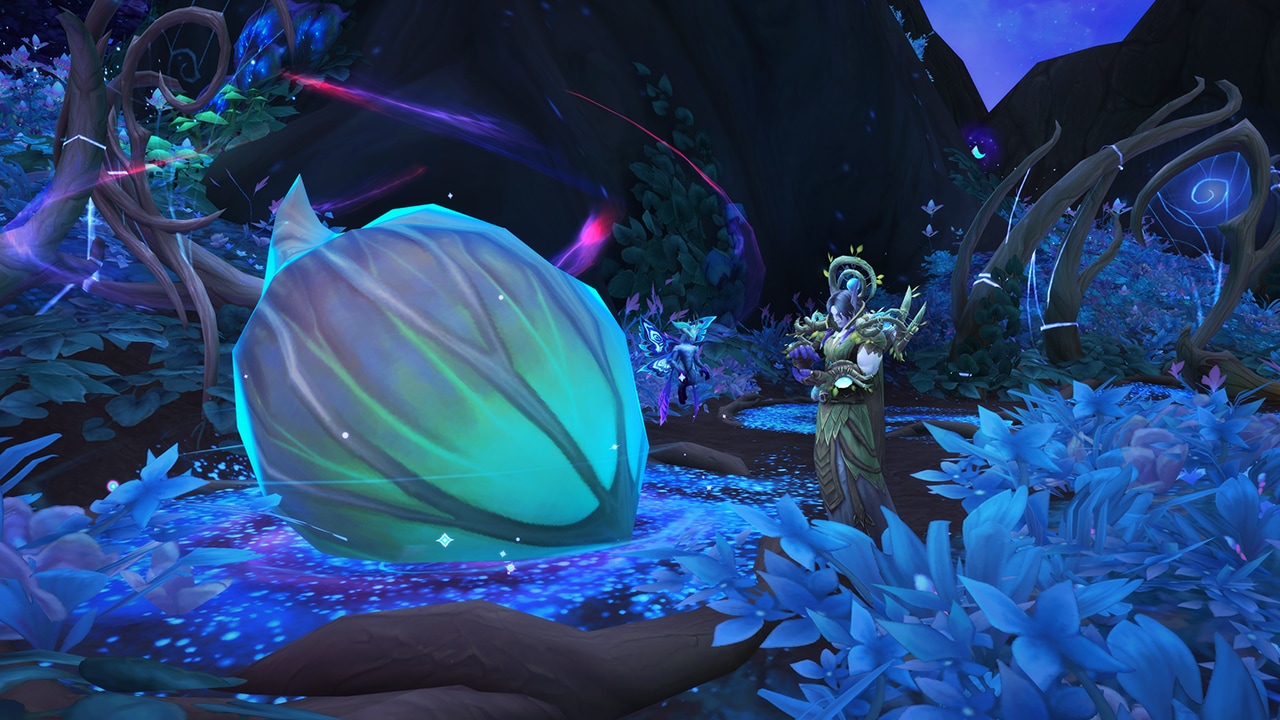 All members of the Night Fae Covenant can access the Queen’s Conservatory, a celestial garden where they will harness the power of rebirth that flows through Ardenweald to help the souls of ancient deities to return to life.

During your adventures in the Shadowlands, you will come across the preserved souls of celestial spirits from across the cosmos. Within the Queen’s Conservatory you will find the power to aid you in restoring those souls to their former glory.

To do so you will work with the Queen’s Warden to nurture the ancient souls back to strength using the magic of the Wildseeds of Ardenweald. Inside the garden of the Queen’s Conservatory you will have access to two types of plots—the Wildseed Pods themselves, and Catalyst Plots. You can plant different catalysts in the plots connected to each Wildseed to infuse that seed with extra strength. Each type of catalyst will provide a different type of bonus to the regrowth process.

One catalyst might reduce the incubation time required to restore a soul, while others may influence the amount or quality of the reward cache you receive from each restored soul. For once restored to their full strength, the restored deity will show their gratitude with a reward cache, which can contain anything from resources to special cosmetics, such as pets and mounts.

Managing the various Wildseeds and plots allows you to try to maximize the efficiency of your garden. Learning the best ways to use and place your catalysts will be the key to unlocking the true potential of the Queen’s Conservatory.

Night Fae players are able to enlist the aid of Marasmius, an ancient and venerable member of the Court of Night who serves as the living transportation network of Ardenweald. As you restore the Sanctum, you’ll help Marasmius repair himself, unlocking new transportation network tiers that grant access to mushroom rings around Ardenweald—including places that can only be accessed by the mushroom network.

There are three tiers of Anima Transport that you’ll unlock over time by increasing your Renown Level. Here are some examples:

Allows travel to Heart of the Forest, Stillglade, The Stalks, Forest’s Edge.
Can be used to reach a unique location: The Ring.

Allows travel to Banks of Life, Elder Stand, and Gormhive.
Can be used to reach travel to unique caves in Ardenweald.

You’ll put your tactical skills to the test by sending your allies into the Shadowlands and lending aid to the Night Fae Covenant. While this feature is available to each Covenant, the allies you recruit and the missions you send them on will be unique to the Covenant. You’ll need to get to know the strength and weaknesses of those you send out with the scouting map.

Players can enable additional content with their Covenant’s realm by investing Anima into specific areas in Ardenweald. When you restore Anima to a location, it revitalizes the area, allowing you to access new quests, making it easier for you to unearth wondrous treasures, or luring powerful foes which can be slain for rich rewards. Different areas are tied to different content unlocks.

The cunning night fae you befriended in Ardenweald will form a special bond with you if you join their Covenant. Below are descriptions of each along with a few example powers they bestow upon you. Niya is a sylvar who was tasked with guarding and caring for the wildseeds in her grove, whom you met in a time of tragedy as her grove was left to wither so that its anima could be reclaimed. As she journeyed with you, Niya learned the hard truths of survival admidst the drought. An expert hunter and tracker, her skills will aid resolving the drought, and the other threats to Ardenweald.

Sylvari Mantle: When Soulshape ends, you are concealed until you move.

Grove Invigoration: When you use your Night Fae class ability or spell, gain a moderate amount of Mastery, slowly fading over a few minutes. 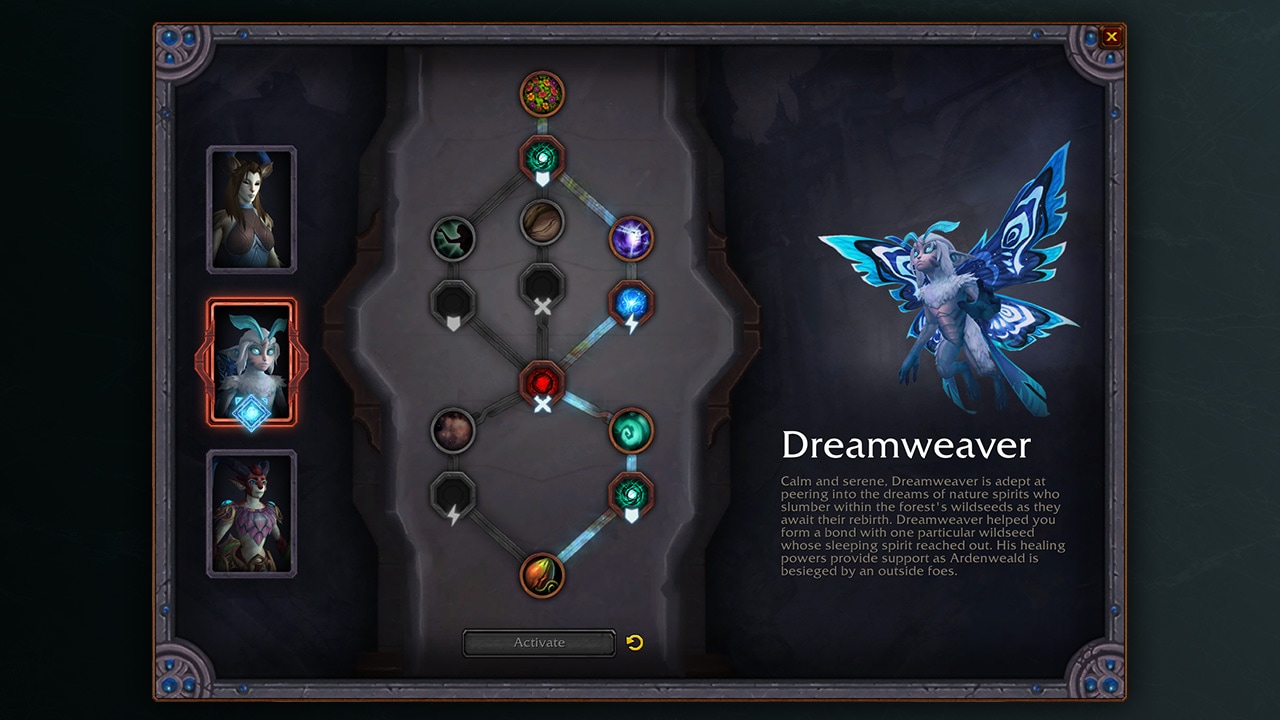 Dreamweaver is a calm and serene faerie who’s adept at peering into the dreams of nature spirits who slumber within the forest’s wildseeds as they await their rebirth. Dreamweaver helped you form a bond with one particular wildseed whose sleeping spirit reached out. His healing powers provide support as Ardenweald is besieged by outside forces.

Field of Blossoms: When Soulshape ends, you increase the movement speed of nearby allies for a moderate amount of time.

Podtender: When you would take damage that would kill you, instead rejuvenate within a wildseed, regaining a moderate amount of your maximum health over a few seconds. If the pod takes more than a certain amount of damage during this time, you die. This effect may only occur once every several minutes. 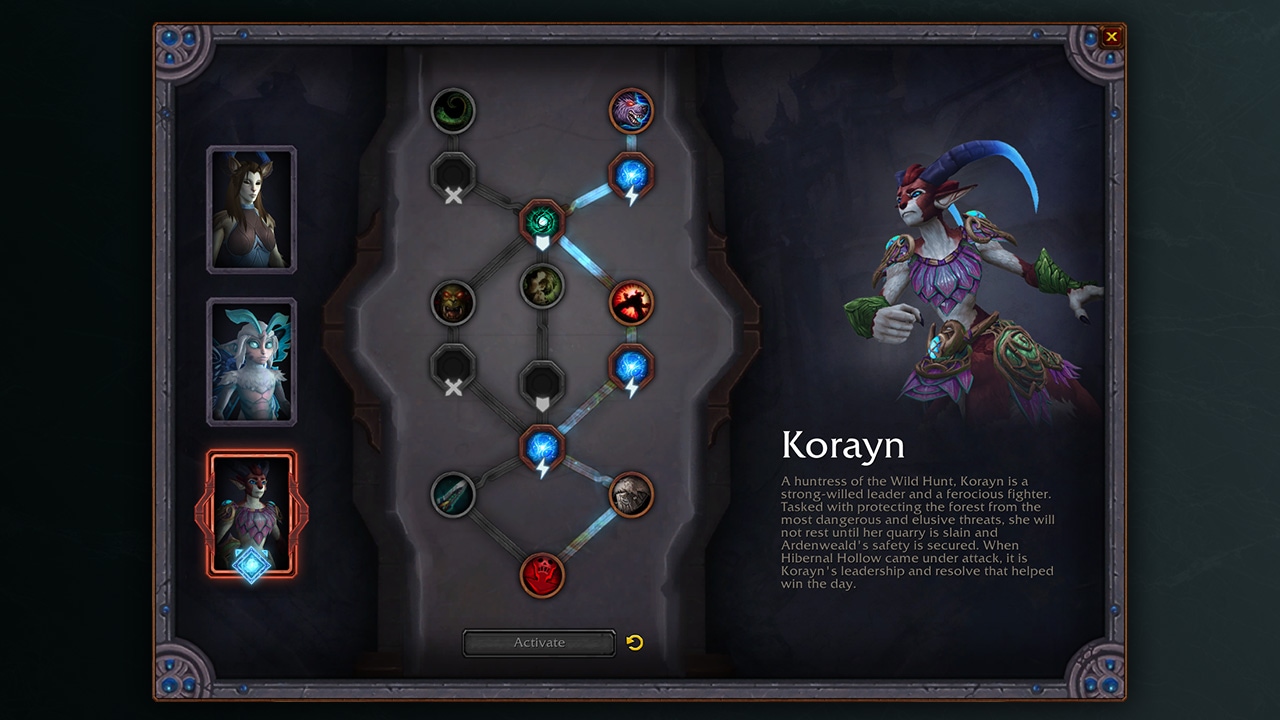 Korayn, a huntress of the Wild Hunt, is a strong-willed leader and ferocious fighter. Tasked with protecting the forest from the most dangerous and elusive threats, she will not rest until her quarry is slain and Ardenweald’s safety is secured. When Hibernal Hollow came under attack, it is Korayn’s leadership and resolve that helped win the day.

Wild Hunt’s Charge: While out of combat, your Soulshape’s teleport becomes a charge, stunning your target for a few seconds and ending your Soulshape.

Final Moments: Your healing and damage to targets below at low health is slightly increased. When an ally dies, this benefit is significantly increased for a moderate amount of time. This enhancement may only occur once every few minutes.

Power of the Night Fae

Soulshape
Turn into a Vulpin, increasing movement speed. You may reactivate Soulshape to teleport a short distance forward.
Additional cosmetic forms can be earned and collected through a variety of gameplay. While out in the world, this effect has a short duration before it wears off, but lasts indefinitely while in a rest area.

As you grow in power and help your night fae friends, you’ll unlock new Soulshape forms that you can transform into at any time.

We look forward to sharing more information as development continues, and we hope this preview gives you a taste of what the Night Fae Covenant has to offer. Learn more about Ardenweald in our previously published article.