We are planning some fantastic changes to the Arena World Championship and Mythic Dungeon International in 2021 to take full advantage of all that Shadowlands has to offer.

Despite a turbulent 2020, the World of Warcraft esports team is thrilled with the community’s response to the changes made to both Arena World Championship and Mythic Dungeon International programs. While players explore the realms of the Shadowlands, we will be expanding on what worked in 2020 and offering some fun changes to make 2021 another epic year for World of Warcraft Esports!

With the launch of the fourteenth year of the Arena World Championship (AWC), we are expanding to two seasons of epic PvP competition. In 2021, the AWC will consist of two seasons culminating in the AWC: Shadowlands 2021 Grand Finals next Fall, with a $900,000 (USD) total prize pool up for grabs for the year!

Beginning today, teams in North America and Europe can sign up on GameBattles for the Season 1 open Cups. In addition to a $10,000 (USD) prize pool per cup, teams will be competing for points. The top eight point-earning teams from both North America and Europe will advance to the Circuit following the conclusion of all four cups.  The Circuit will consist of a four-week round robin and total prize pool of $160,000 (USD). Following the Circuit, the top four teams from each region will earn their spots in the Season 1 Finals and a shot at the $200,000 prize pool (USD)! 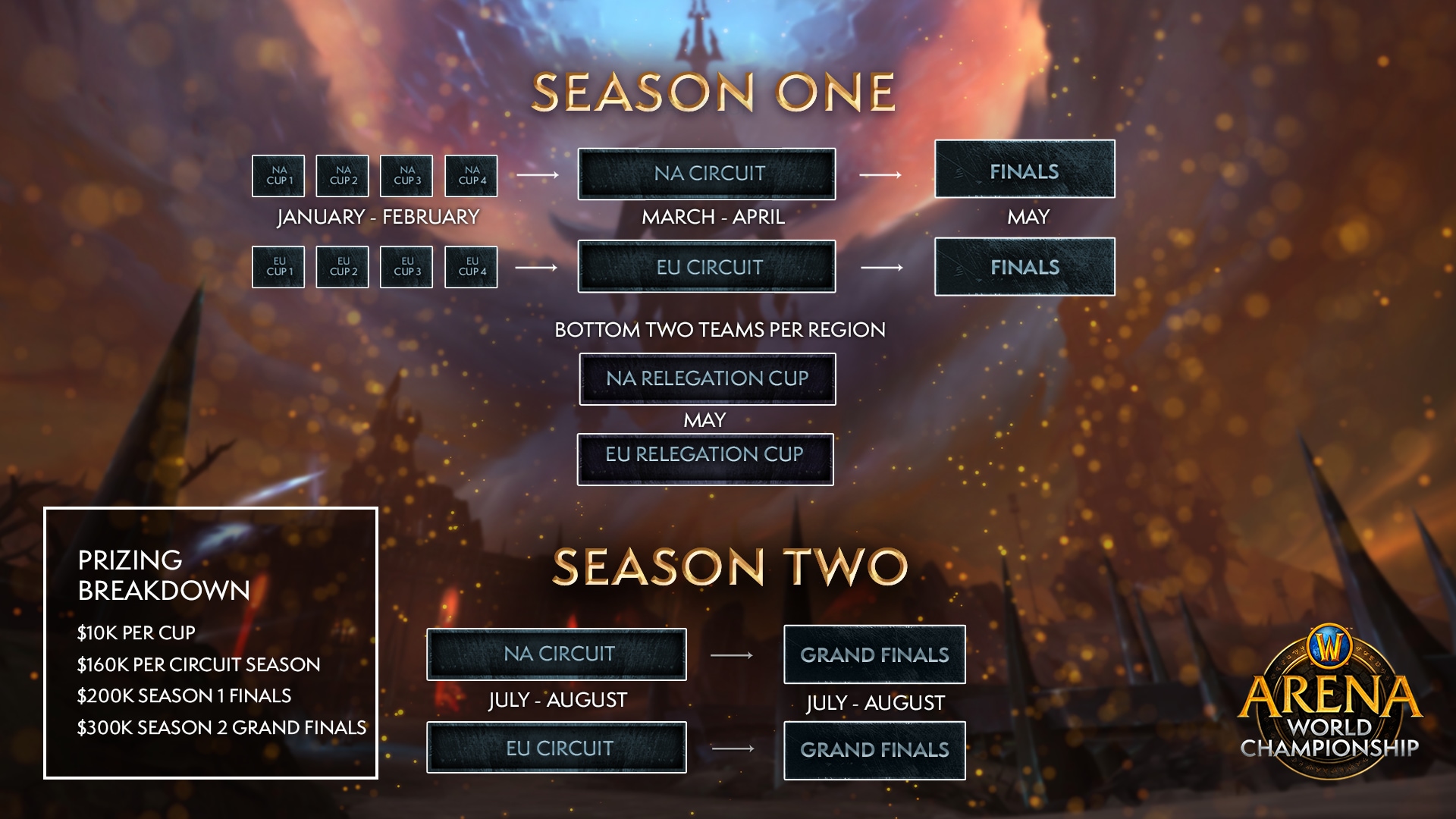 Once the Season 1 champions have been crowned, it’ll be time to set the stage for Season 2. Instead of another series of open cups, the top six regional teams from the Season 1 Circuit will automatically advance to the Season 2 Circuit, while the remaining spots will be filled through an open Relegation Cup. The Relegation Cup will consist of the bottom two teams from the North American and European Season 1 Circuit, battling against an open field of competitors looking to secure a shot in Season 2.  The top two teams from each region at the end of the cup will advance to the Season 2 Circuit.

Like in Season 1, the remaining teams in North America and Europe will be fighting for their share of the $160,000 (USD) total prize pool and one of the four regional slots in the finals. The final teams to advance will not only be fighting for the expanded $300,000 (USD) prize pool, but to cement their names as the AWC: Shadowlands 2021 Grand Finals Champions!

Following the continued success of the Mythic Dungeon International (MDI), and with new dungeons in Shadowlands to challenge players, we are removing regional distinctions to create a truly global competition by removing regional distinctions.  The MDI in 2021 will consist of two standalone seasons—each concluding in an epic Global Finals—and one-off tournaments, providing players from around the world multiple chances to take home their share of over $750,000 (USD) in prizing!

In 2021, we are separating China into it’s own program while players from across the rest of the world will now compete in a distinct global MDI region across two seasons. Each season will consist of four Cups, culminating in a Global Finals. To compete, teams will register for Time Trials, from which the top eight global teams each week advance to an MDI Cup. Teams will earn points based on how well they do, in addition to competing for a share of each Cup’s $20,000 (USD) prize pool. At the end of four Cups, the six teams with the most points will advance to the Global Finals. In addition to the top six Global teams, two more will join the Global Finals from a dedicated China MDI season. These eight teams will battle it out for their share of the $300,000 (USD) prize pool and title of MDI Global Champion!

The first MDI 2021 season begins on January 14, and sign-ups are now open, so head over to GameBattles to register! 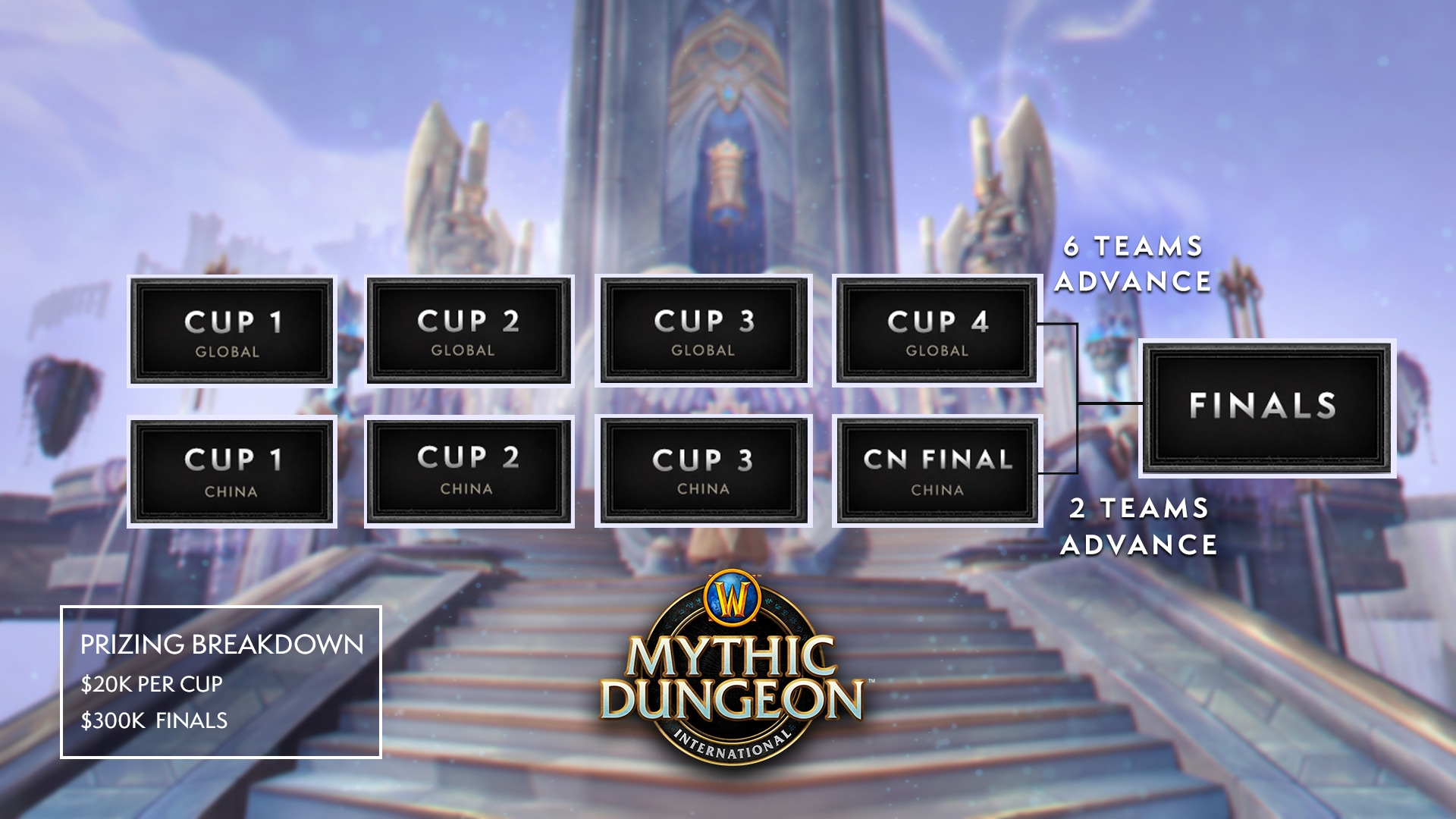 Beyond the two MDI seasons, 2021 will feature two one-off tournaments for players to tackle the dungeons of Shadowlands in unique ways. These tournaments will showcase different competitive formats and provide unique new looks on competitive dungeon running. Be on the lookout for more information over the coming months!

Prideful – The first affix for Shadowlands’ first season is Prideful. While the Prideful affix is active, players will overflow with pride as they defeat non-boss enemies, eventually forming a Manifestation of Pride. Upon defeating this Manifestation, players will become greatly empowered, opening new strategies that will help your party defeat the challenges ahead.

Shadowlands brings eight brand new dungeons for MDI teams to run! Head over to our Shadowlands dungeons article to check out everything you need to know to know about the dungeons in World of Warcraft’s newest expansion.

We can’t wait to get the Shadowlands competitions underway, so be sure to sign up for the AWC and MDI Cups on GameBattles. Stay connected and stay on top of the latest news by subscribing to our YouTube channel and the following the WoW Esports Twitter.

Good luck and have fun!