Through an incredible Grand Final match, Echo bested Perplexed 3-0, clinching the title, gold medals, and $150,000 (USD). Throughout Season 1, Echo and Perplexed have been the top two teams in the Global Region, with Echo not dropping a single match all weekend, and they each proved nearly untouchable during this weekend’s Global Finals. Each team went undefeated in the early rounds, they faced off in the first semifinal where Echo swept for a 2-0 victory to secure their spot in the Grand Final match.  On a day 3 filled with clean sweeps, the final match proved no different as Echo quickly defeated Perplexed for the second time this tournament.

In speaking with Gillian “Eiya” Long after the Grand Final, Gingi said “We went undefeated in the finals! And back to back to back, I couldn’t be more excited…I couldn’t ask for a better team.” You can catch the full interview on the WoW Esports Twitter. 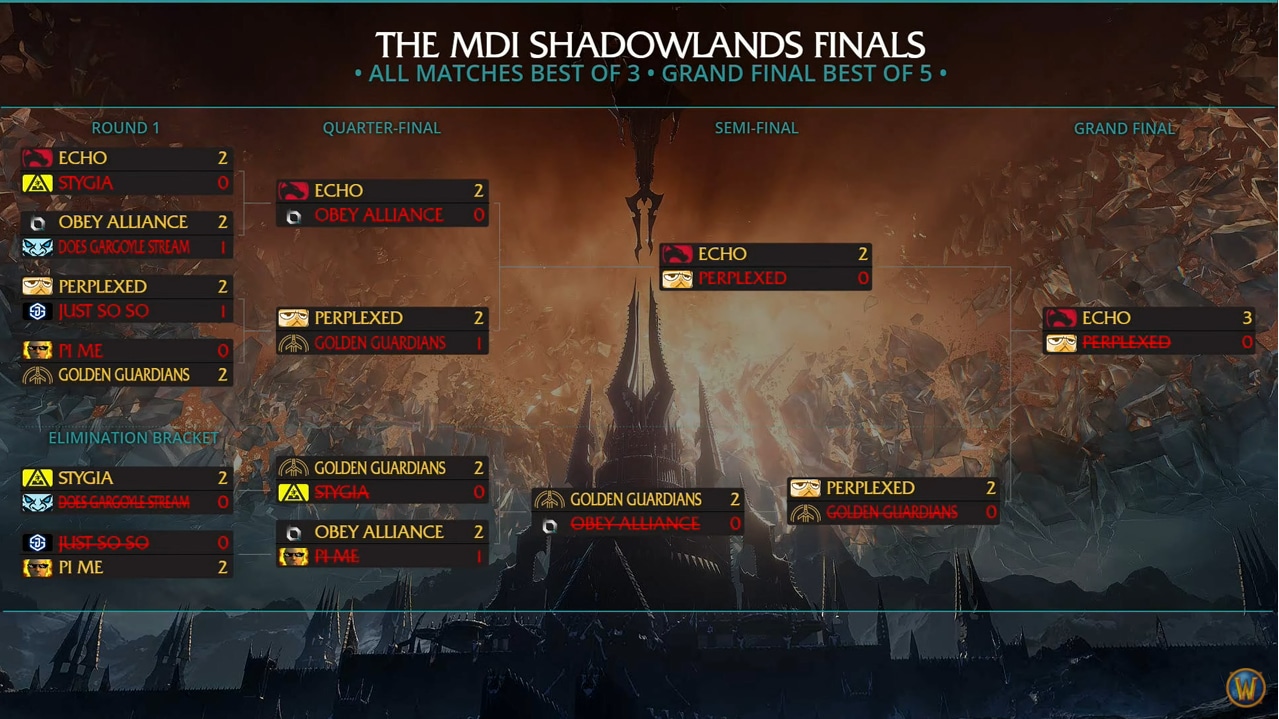 Ahead of Cup 1, Golden Guardians one of the favorites to take the whole season, but were never quite able to pull ahead of the pack. After falling to Perplexed in the quarter-finals 2-1, Golden Guardians quickly beat Obey Alliance to advance to the second semifinal. While they were once again bested by Perplexed, Golden Guardians have still finished the Global Finals with the bronze medals.

“Echo and Perplexed were consistently dominant throughout the cups, so it was no surprise to see them battle it out in the Grand Final,” said Adrian Archer-Lock, MDI Program Lead. “With Echo’s mind-blowingly fast Necrotic Wake in game 1, we knew this was going to be a Grand Final unlike any other. While these are the best dungeon-running teams in the world, no matter how good a team is the beauty of MDI is how unpredictable each match actually is. I can’t wait to get Season 2 started and see how teams will continue to evolve.”

While MDI Season 1 has concluded, the dungeon-running action is far from over. On May 28-30, on YouTube and Twitch, we have The Great Push where teams will push Keys as high as possible in our first one-off tournament of the year. And don’t miss a moment of next weekend’s Arena World Championship Season 1 Final, May 1-2 on YouTube. Thanks for joining us this weekend, and as our Associate Content Manager, Jess Downey, said: “The MDI Global Finals were cool and good. Wicked sick.” We’ll see you in the Dungeon Finder!