The Arena World Championship (AWC) casters are here to share their predictions for which teams will take their Regional titles during the Season 1 Finals, beginning May 1 on YouTube at 10 a.m. PT.

With $200,000 (USD) on the line across both Europe and North America, the competition during this weekend’s AWC Finals will be tense. Will Skill Capped remain undefeated? Can NA’s fourth-seed Golden Guardians upset top-ranked Cloud 9? As the top four teams from Europe and top four from North America prepare to face off, the AWC casters are ready to share their predictions for which teams will reign supreme. Join us this weekend to see who is right during the thrilling conclusion to AWC Season 1, only on YouTube! 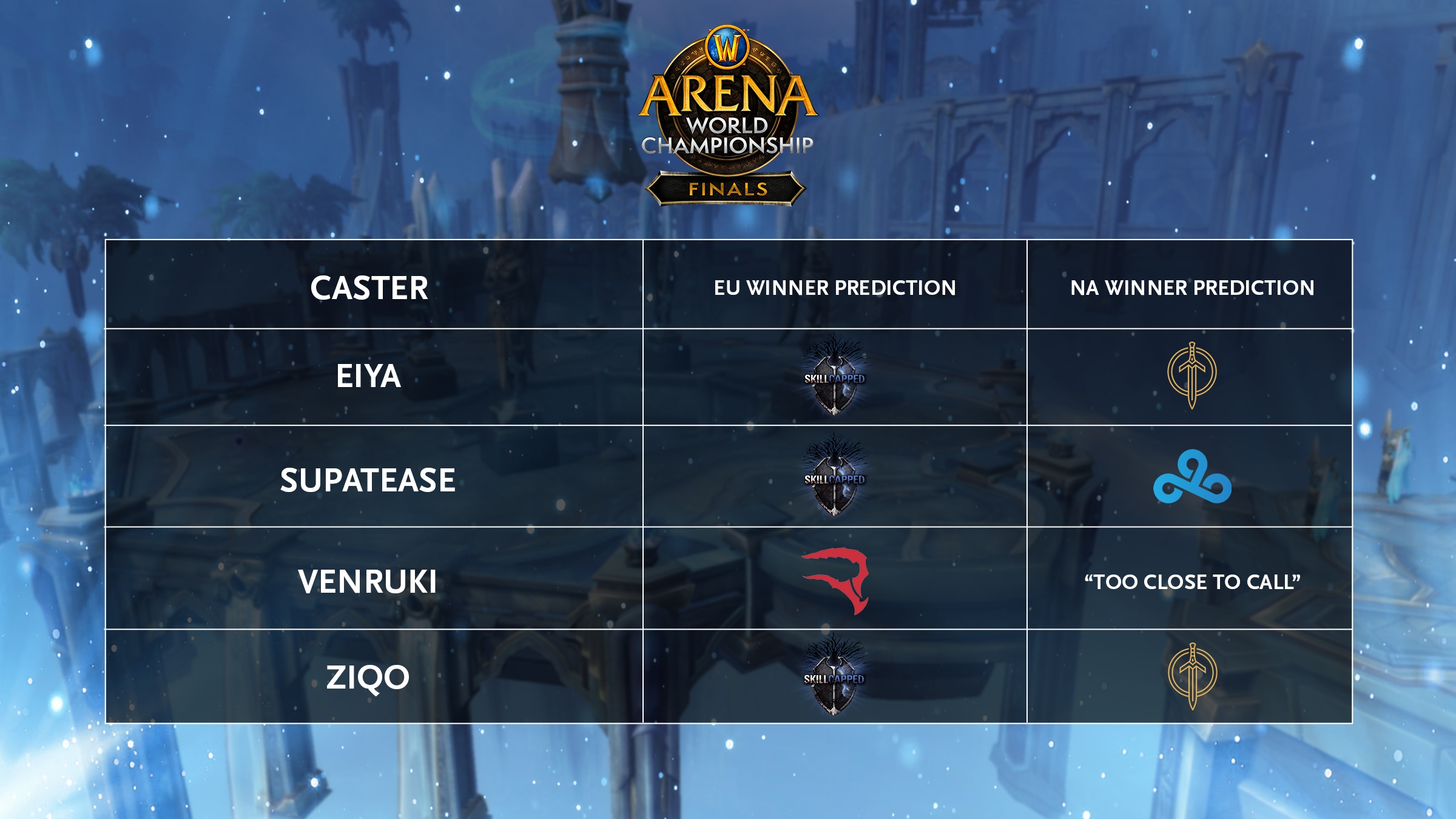 EU - Skill Capped: They went the whole circuit without losing a series. I am always interested in seeing Creed bring something new to the table and I hope they do that for the finals.

NA - Golden Guardians: They seem to be on a bit of a roll and I want to see them continue.

EU - Skill Capped: Going 7-0 in the Circuit makes it tough to bet against Skill Capped. Maro, Froffsy, and Asgarath have developed tremendously as a team in such a short time since their roster swaps. I’m intrigued to see if Method EU will mirror Skill Capped in Shadow Priest, Fire Mage, and Holy Paladin and who ends up on top.

NA - Cloud 9:  Most well-rounded team in terms of options. They have the highest amount of composition diversity to overcome any option thrown their way. Golden Guardians also have the potential to beat a lot of matchups and I’m curious to see how far their off-meta strategies will get them.

EU - Reload Esports: This team has risen to the occasion and their level of prep work and gameplay has impressed me. They appear hungry for a win and although some beastly teams are waiting for them, I think if they prepare right they have a great shot.

NA - Too close to call:  The top four in North America is interesting because there's no clear front runner. During the round-robin, every single team in the top four lost to another team in the top four. Nobody has beaten everyone which makes this region particularly interesting. I guess that the team who wins will bring in surprises not yet seen in the circuit, may the best team win!

EU - Skill Capped: After dominating the circuit, it's hard to bet against Skill Capped’s Shadow Priest/Mage combo. They have shown great execution in drafts, have the right comps for the meta, and some of the best individual players. In addition to their seemingly unbeatable shatter composition, they have Blizo ready to step in. This team is the team to beat in EU.

NA - Golden Guardians: This team has kept the same roster through thick and thin. Though they have had their ups and downs, right now the Golden Guardians are on the rise. With how important Shadow Priest and BM Hunter will be for the finals, this team has the perfect opportunity to upset the whole tournament. It will all come down to their first match vs Cloud 9, if they can repeat their circuit performance then they could ride the momentum all the way.