Two ice-entombed zones, The Storm Peaks and Icecrown, beckon fearless champions on their journey to face the Lich King. Learn all you need to know to prepare yourselves to bring the fight to the Lich King and a stop to his vicious plans. 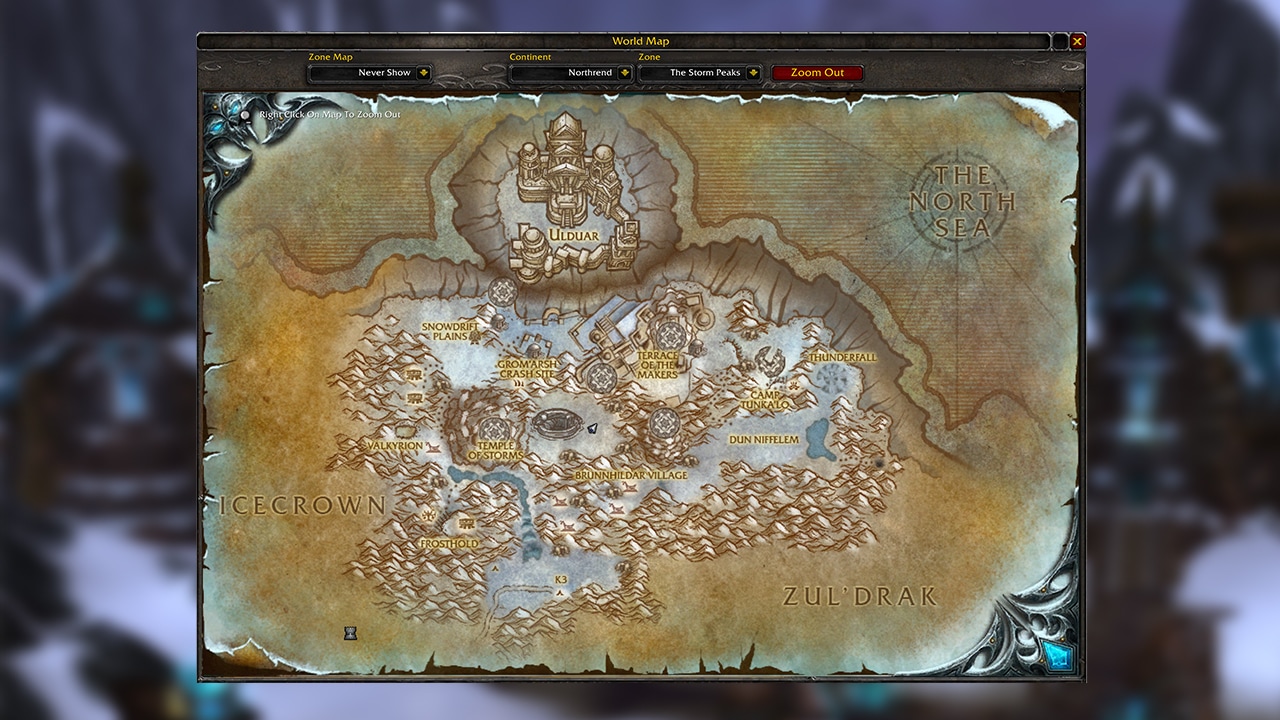 The Storm Peaks is a mountainous region plagued by frigid and violent winds. It is in the northeastern part of Northrend and shares a border with Icecrown, Crystalsong, and Zul'Drak. At one time, it was home to the titans. The legend is that the benevolent watchers monitored Azeroth from the Storm Peaks in the years following their reshaping of the world. The secrets of Azeroth's past, present, and future may be found in the old ruins of Ulduar.

The taunka, ancient relatives of the tauren, make their home here. The following supplies are available to champions of the Horde:

A formidable stronghold in the southwestern part of The Storm Peaks is home to the frost dwarves. Heroes of the Alliance will be able to find the following services: 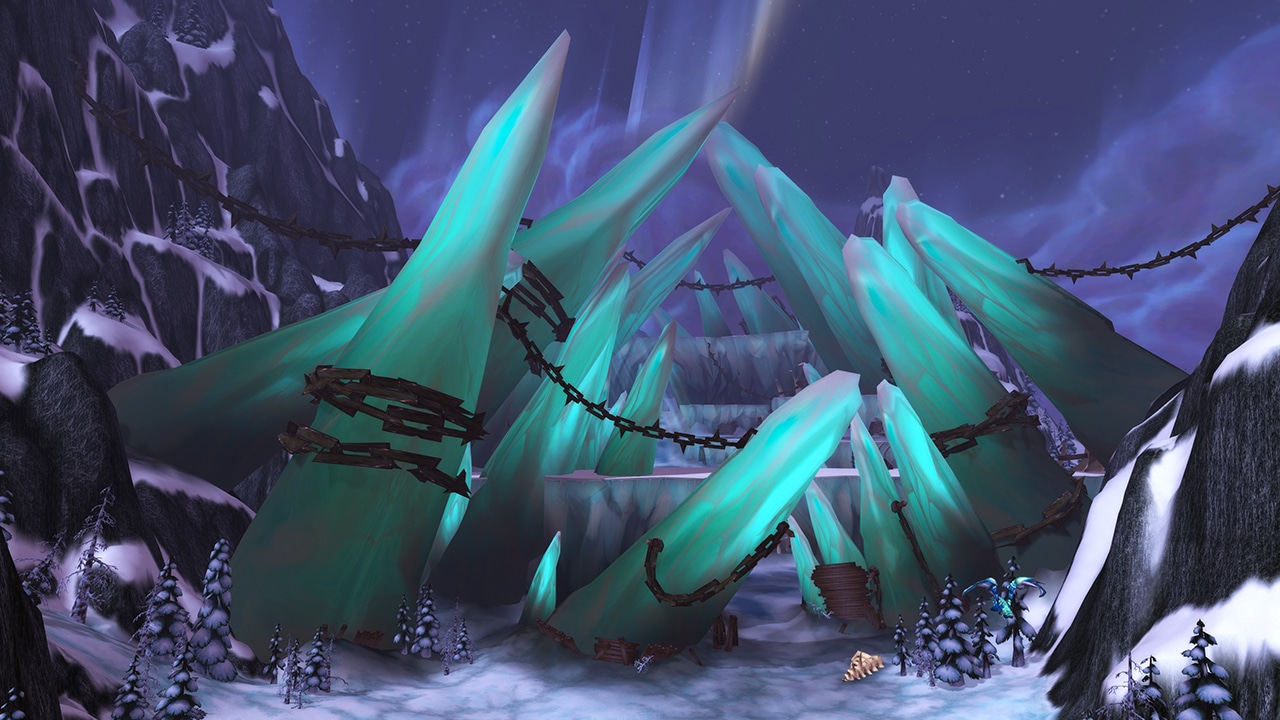 There are a handful of neutral settlements, but only a few offer supplies that will be needed during your adventurous exploration. 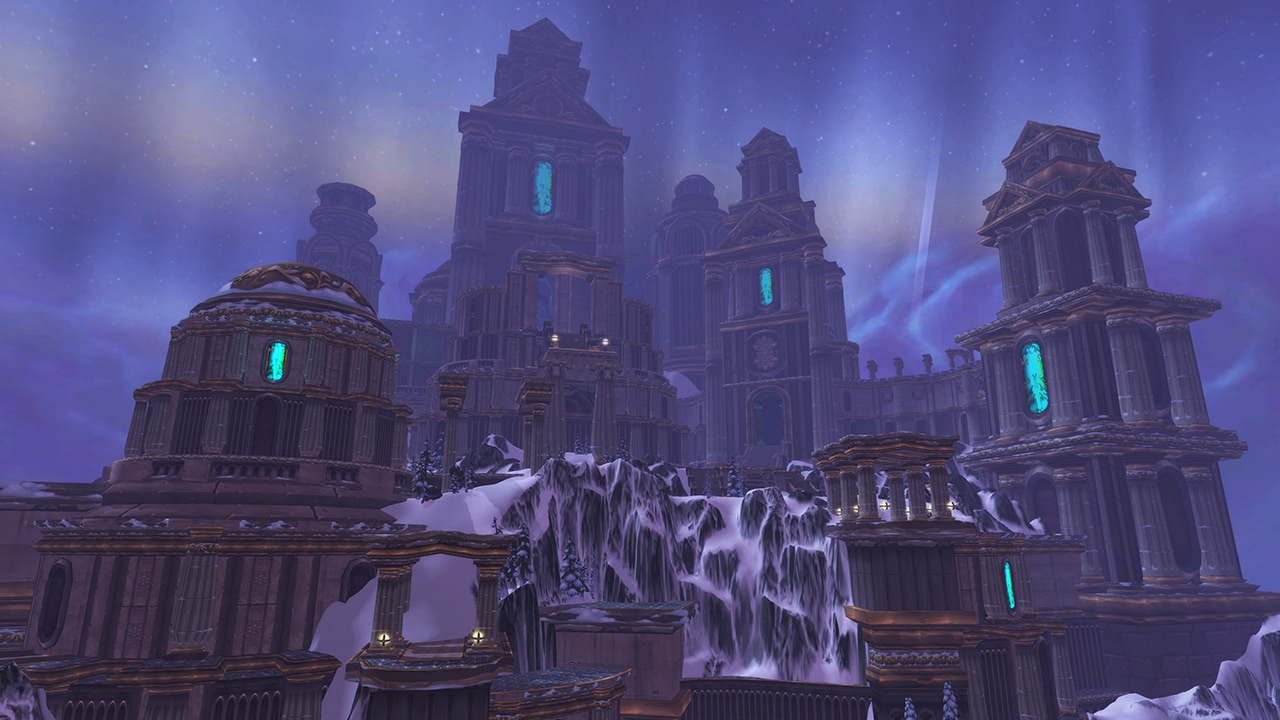 There have been whispers of a great evil at work behind the fall of the titan-forged city of Ulduar. Heroes seeking the truth can find it in the corridors of this ancient compound. Few have braved the perils of Ulduar and returned to tell of their discoveries.

Halls of Stone: This is the first instance in Ulduar and is protected by storm giants and crystal golems. Only the bravest adventurers can uncover more about the titans and their actions in Ulduar.

Halls of Lightning: Ulduar's second instance can be found in the eastern part of the titan city. It is here that Loken, closely guarded by elementals and surrounded by his powerful servants, commands his forces. 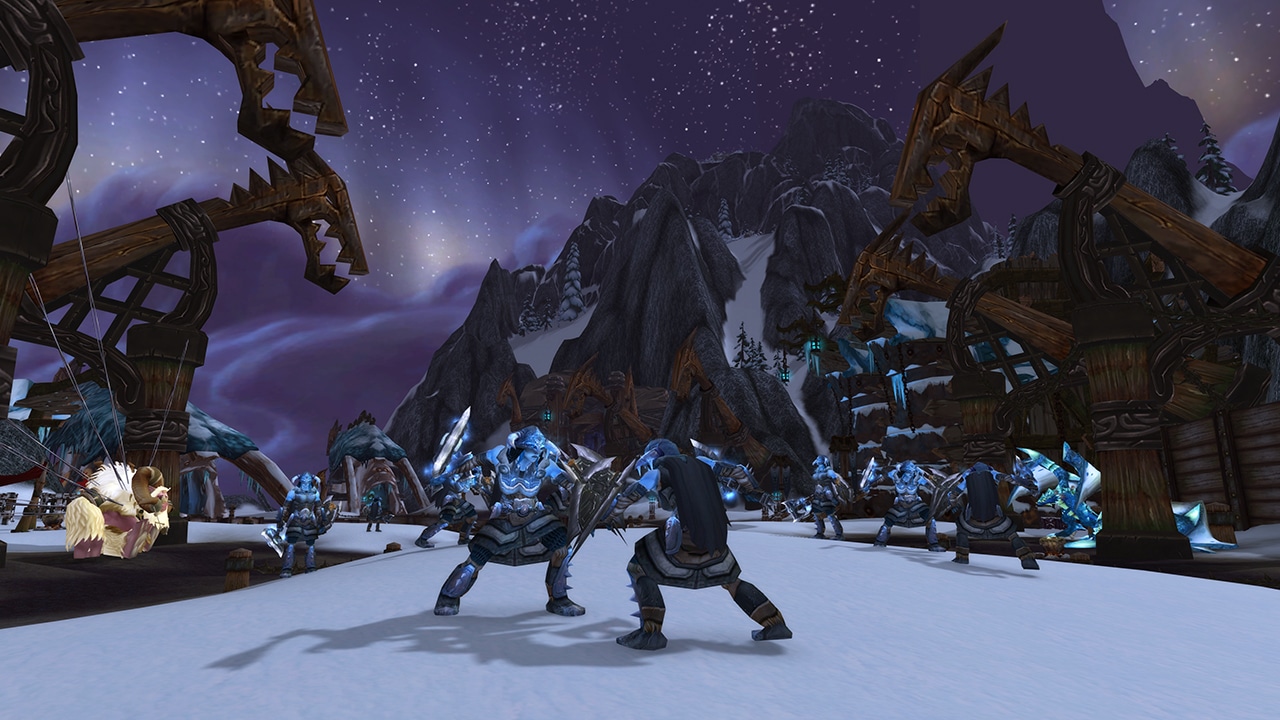 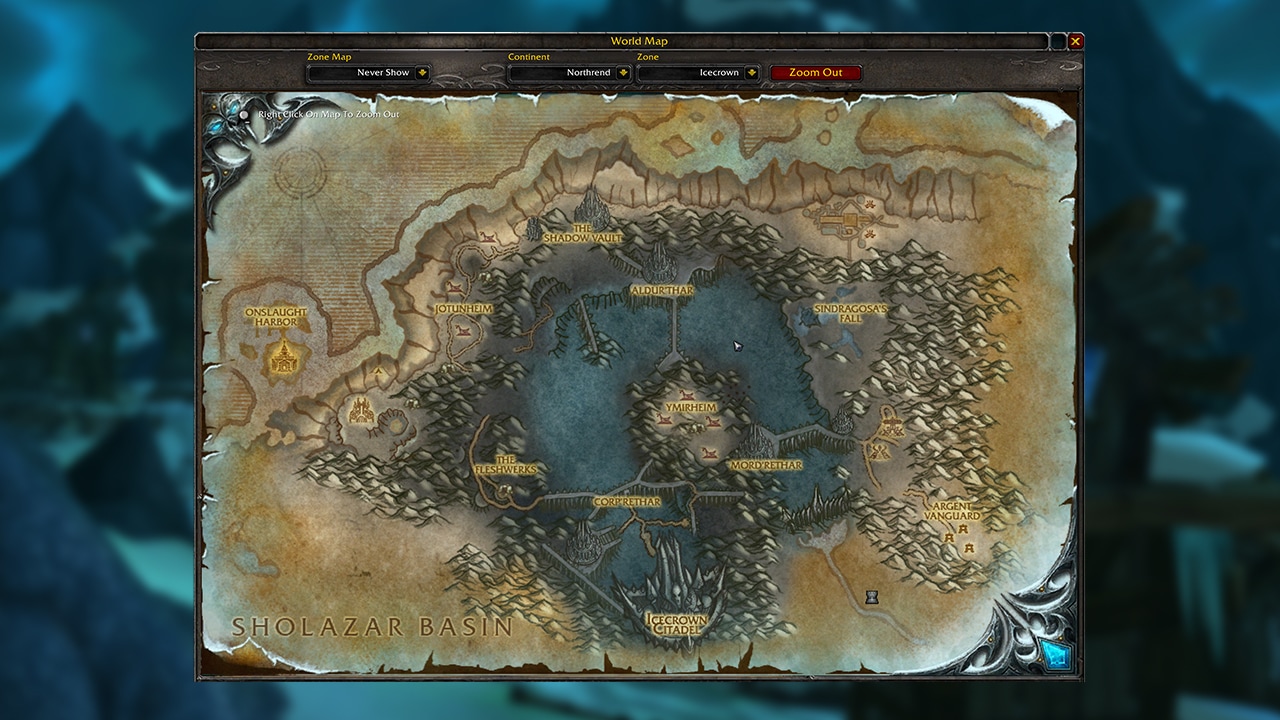 Icecrown is a glacial wasteland of blighted black ice and rock. Here, the stage is set for the final battle against the Lich King, or so you thought.

Trial of the Champion

This instance is located in the northeast corner of Icecrown. It is here that High lord Tirion Fordring presents his test of courage, endurance, and teamwork to cull those lacking the moral conviction to enter Icecrown Citadel. 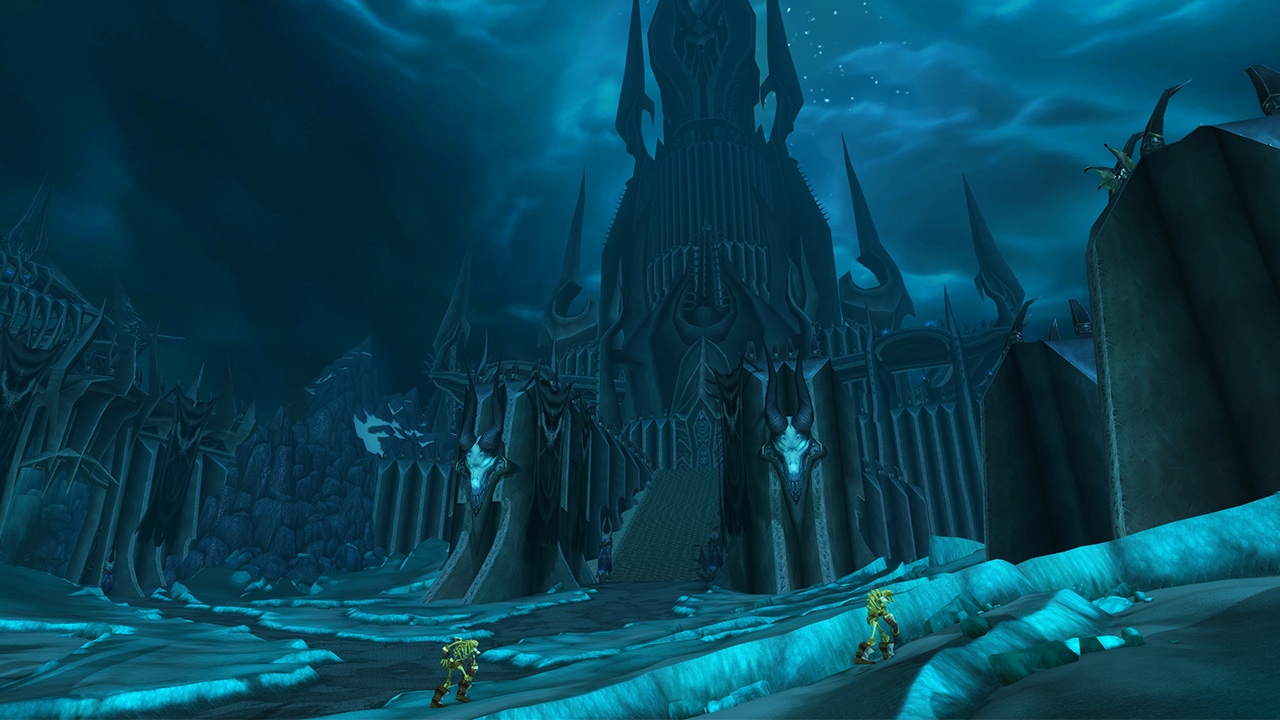 Located in the frozen wasteland of Icecrown, the Scourge's almost impregnable fortress casts a deathly shadow across the land. From within the brooding Icecrown Citadel, the Lich King commands his undead Scourge to scour the world of all life. Champions among the races of Azeroth have stood against the Lich King only to be slaughtered mercilessly and forced to serve in his army of undead horrors. The final raid instance in Wrath of the Lich King Classic and the battle you have been pushing towards will pit you against the Lich King and some of his most vile servants. 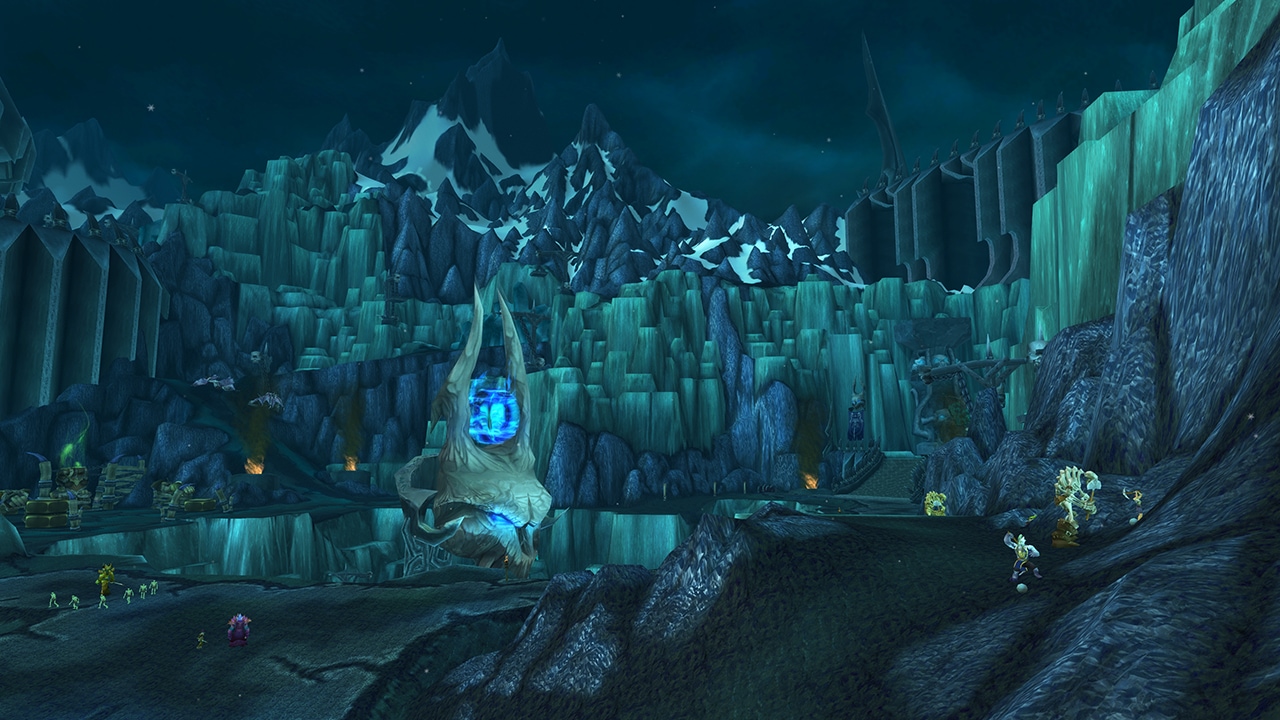 Forge of Souls: The first wing of the Icecrown Citadel dungeon complex known as the Frozen Halls. The Forge is a massive production facility with soul grinders, the latest foul construct in the Lich King's arsenal.

Pit of Saron: This second wing in the Frozen Halls puts players in a position to rescue prisoners taken by the Scourge and forced to mine saronite or face torture and certain undeath.

Halls of Reflection: The third and final wing of the Frozen Halls will have players enter the Lich King's chambers and engage in battle against the cursed sword, Frostmourne, before being confronted by the Lich King himself. 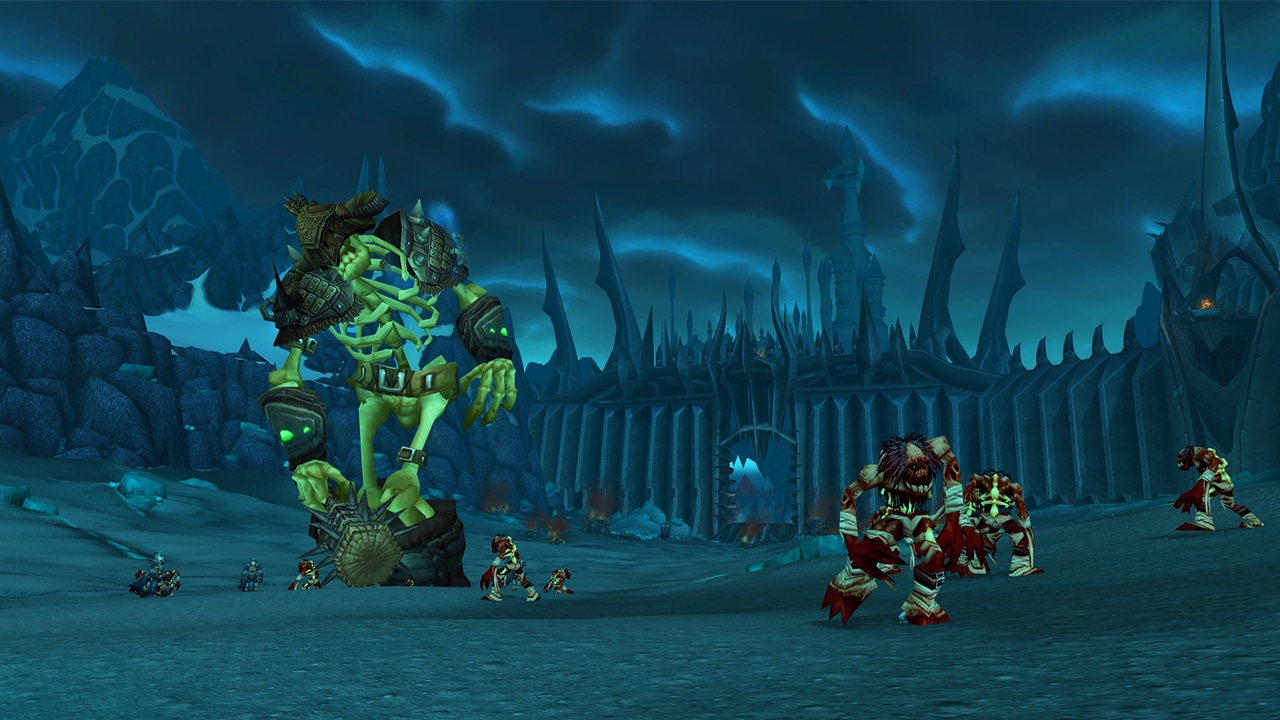 Preparing for the Journey

Keeping yourself supplied is challenging, and available services are limited within The Storm Peaks and Icecrown. Flight paths are readily available to other parts of Northrend and other hubs. Most of what you'll need to survive can be procured without traveling to the capital cities unless you need the Bank or Auction House. Don't forget to set your Hearthstone before you go.

See you in Northrend!