Well, well, Winter Veil is here and I have to be frank. I’m a bit concerned about Greatfather Winter’s pal, Metzen the Reindeer. You’d think after years of trouble he would have finally come to understand that his own pensive curiosity and need to wander around Azeroth when the big man’s in town only leads to trouble, but oh no! Once again, he’s gone and neglected the lessons of the past, fooled around with the wrong sort, and gotten himself captured. Again!

High in the mountains of Alterac, there’s a cave where a giant slobber-machine named the Abominable Greench has settled in. Inside the cavern he guards is an array of wonders that make this holiday special--brightly lit trees, toys, and hey, is that a wind-up corgi I see? But the most pathetic thing about this whole situation is right outside. You guessed it, it’s the wooden corral that contains the most famous reindeer of all: Metzen! Gimme a second to wipe the tears of laughter away!

Sigh . . . poor Metzen. Now, you’re probably wondering what this has to do with your Pet Battles training. Well, you see, me and Mister Winter have an accord of sorts. He knows who’s been naughty or nice, and I know who’s been naughty or nice. Mostly because he can’t beat my team with his. Haha! This year, he’s requested assistance in returning his beloved buck who tends to wander out to the same cave every single day. And in return for your nice expressions of niceness, he’s promised to deliver some gifts on Winter Veil’s Day in which you may find a tiny version of said cervidae. Facing the Greench should toughen you up, right?!

Break it down, bah hum-pug! 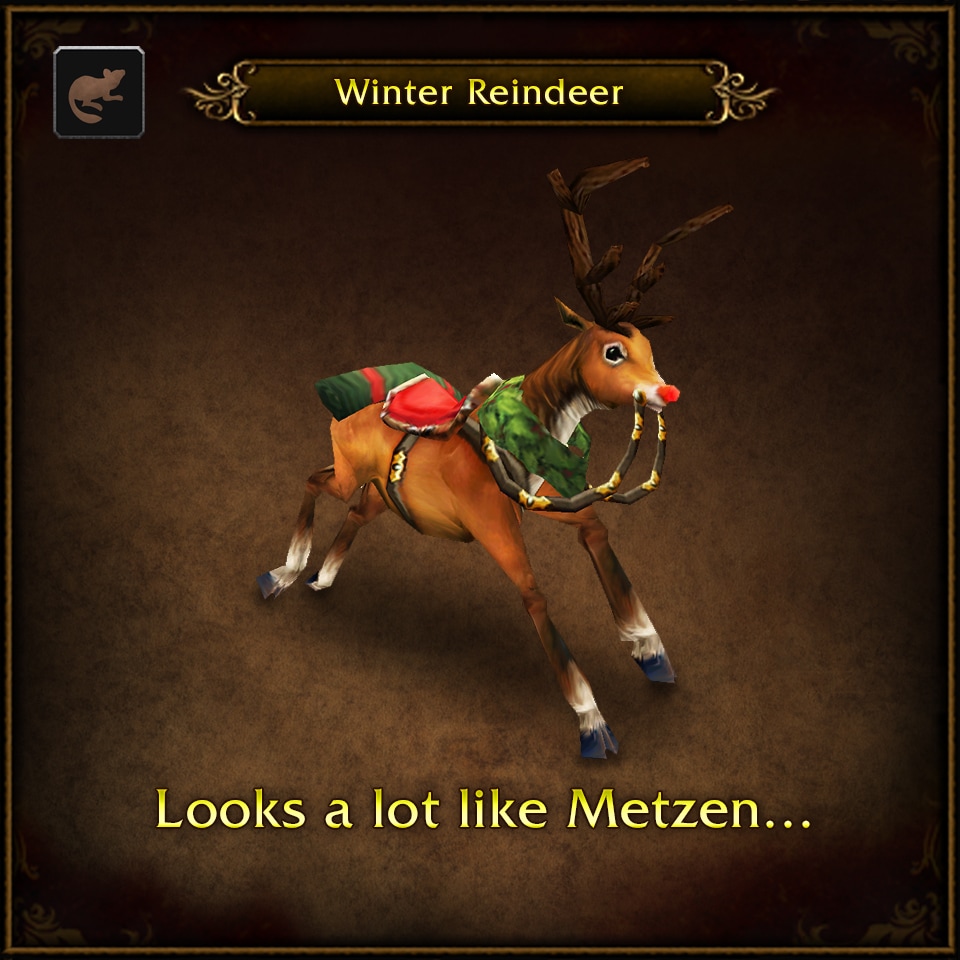 Crithto: Hey, I love the holidays—watch it, Payne! Anyway, as we all know, Metzen can be just as curious as . . . well, cats, and helping out Greatfather Winter could earn you the right to have a miniature Metzen-like mammal all your own. With the Winter Reindeer on your team, you can snowball your way to a victory by assisting the others with abilities like Tranquility and Bleat, or channel the horrific memories left by the Greench by using Hoof and Headbutt. Keep an eye on this little guy’s outfit during the season! It won’t be there when it starts to get warmer.

Come join the discussion about this pet in our Pet Battles forum. You can also learn more about the Winter Reindeer by visiting WarcraftPets.com.