For the heroes of Azeroth, the Broken Shore represents pain, sorrow . . . and an opportunity for vengeance. It is the source of the Burning Legion’s seemingly unending incursion, and an ever-present reminder of the defeat suffered at their hands by both the Horde and the Alliance. But now it’s time to return to where the invasion began—this time as a more prepared force.

Assault on the Broken Shore

Hospitality isn’t the Legion’s strong suit, so don’t expect them to roll out the welcome mat for Azeroth’s forces. You’re going to need to break through their defenses, clear the beach, and establish a foothold for your base. Similar to the launch of World of Warcraft: Legion, if you’ve reached max level, Khadgar will have a quest for you which will begin a solo scenario on the Broken Shore.

You and your forces will progress through a series of stages as you press the attack against the Burning Legion. This culminates in the infiltration of one of the Legion’s ships to face the dreadlord Mephistroth — this won’t be the last you’ll see of him however.

Once complete, you’ll arrive at Deliverance Point. This base of operations will serve as a sanctuary for members of all Class Orders as they begin working on a new campaign on the Broken Shore alongside the Armies of Legionfall.

Your first foray into the Broken Shore will involve getting a few things established and learning more about these fel-befouled lands. Evidence remains of a once shining elven civilization, and crumbling structures are all that bear witness to what once was. Even the statues have been touched by the corruption of the Legion.

As you progress through the Broken Shore, you’ll undertake a variety of new World Quests for rewards and continue the evolution of your Artifact weapon.

Completing World Quests within the Broken Shore will also provide Legionfall War Supplies and reputation with the Armies of Legionfall. They can also be obtained from other sources such as rare Elites found around the island. Legionfall War Supplies are essential for contributing to the construction of powerful buildings within Deliverance Point, which will provide additional benefits for those working their way through the Broken Shore.

There’s plenty to do here and more than enough demons to keep everyone on their guard.

You can contribute to the construction of three different buildings by accessing the Legionfall Construction Table. The first time a building is established, a brief scene plays and a quest becomes available that grants the buffs associated with the building. Each building provides access to different benefits, and there are a variety of extra bonuses each building has a chance to provide. Make sure you pay close attention to them—these additional bonuses could sway your choice of which to donate to. Contributions toward each building are accumulated across your game region, so choose wisely.

Constructing each building requires a steady influx of Legionfall War Supplies. Once constructed, the building is available for 3 days, during which players can reap the benefits the building provides. The building will come under attack on the last of those days, after which it is destroyed and must be rebuilt. You’ll then need to wait a cooldown period of one day before you can contribute again to rebuild.

Here are the buildings that can be constructed: 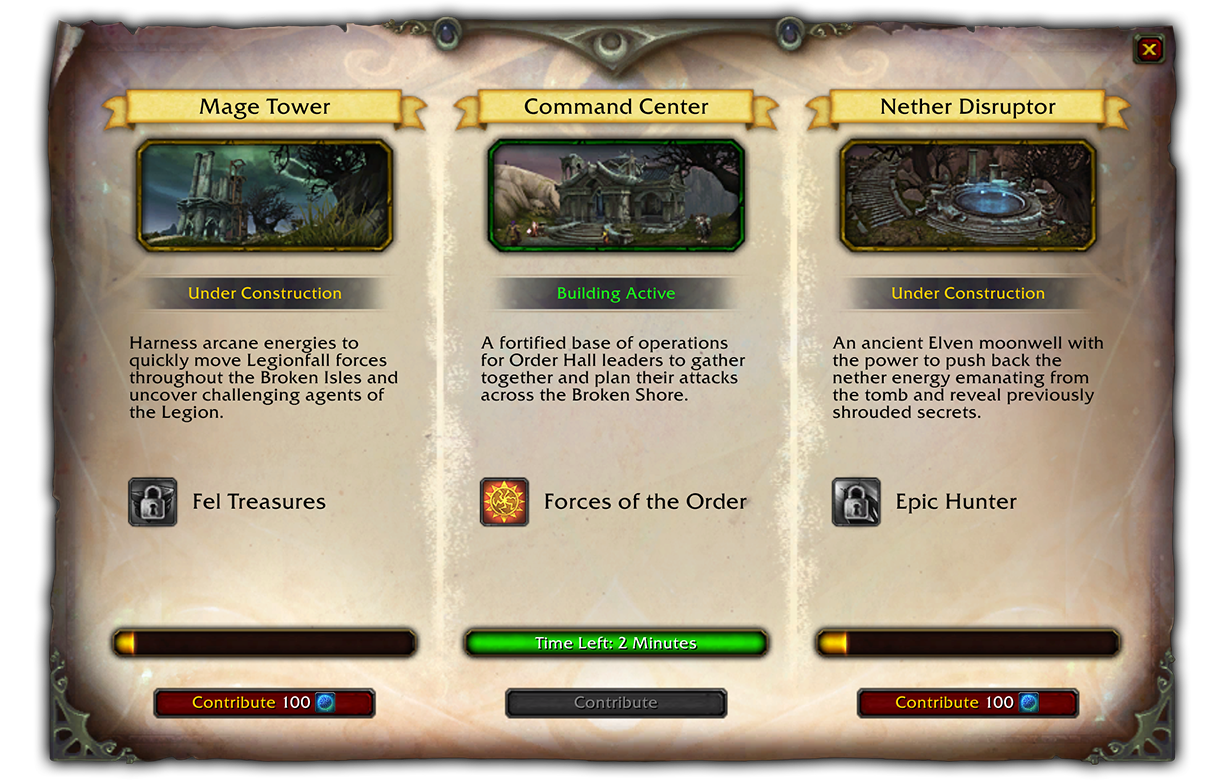 Harness arcane energies to move Legionfall forces quickly throughout the Broken Isles and uncover challenging agents of the Legion.

A fortified base of operations for Order Hall leaders to gather together and plan their attacks across the Broken Shore.

You’ll also have access to your Class Order Command Map here, so you can send your Followers on missions without having to travel back to your Class Hall.

An ancient Elven moonwell with the power to push back the nether energy emanating from the tomb and reveal previously shrouded secrets.

Reinforced Reins: Allows you to interact with objects while mounted.

Where the factions failed, the Class Orders are determined to succeed, and now you have the weapons at hand to make it happen. Each class can continue their Class Order Campaign on the Broken Shore and continue unlocking the power of their Artifact weapon.

For those not at Knowledge level 25, don’t worry. You’ll be led to Dalaran to get a boost up.

If you haven’t opened all 35 ranks of your available traits, a quest will become available so you can complete that before moving on.

As with the beginning of the expansion, you’ll progress your Class Order quest line over time as you play the Broken Shore experience. You’ll also gain one new Follower a few weeks in and can take part in some new class-specific World Quests on the Broken Shore. In some cases, these World Quests will have you aiding other classes along the way.

Under the Glow of the Sentinax

Looming high above the island is the Burning Legion’s command ship, the Sentinax. Fighting creatures within its shadow, will allow you to loot a beacon from these creatures that can be used to command the ship to open portals. These portals will produce more Legion adversaries for you to take on. Each level provides new opportunities to get a higher-level beacon. These higher-level portals in turn allow access to even more dangerous foes.

Open enough portals and overcome enough adversaries and you’ll eventually gain access to a raid boss for you and some friends to take on. It goes without saying—but we’ll say it anyway—this is a great way to amass Nethershards.

Nethershards are a useful currency for purchasing catch-up gear from the vendors Warmage Kath'leen and Thaumaterge Vashreen in Deliverance Point. These can also be used to purchase chances for higher item level gear as well. We hope you have your good dice ready for those upgrades!

Don’t worry about being confined to the shadow of the Sentinax any time you want to collect Nethershards. You’ll also gain them through a variety of other activities and sources as you adventure on the Broken Shore.

Once you complete the opening Scenario and first quests on the Broken Shore, you’ll gain access to the new dungeon, Cathedral of Eternal Night. Khadgar will have a quest that will send you into its upper reaches, where you’ll face Mephistroth once more. Venturing into the cathedral isn’t required to progress through the Broken Shore—but if you want another shot at Mephistroth, this is your chance.

While there’s plenty to do on the Broken Shore, don’t be surprised when something like Demon Assaults on the Broken Isles pulls you away.

Ultimately, your efforts on the Broken Shore will lead to a confrontation unlike any other at the Tomb of Sargeras. With powerful Artifact weapons and the Pillars of Creation at hand, victory over the Burning Legion and Kil’jaeden is nearly assured.

Are you ready for the next chapter?